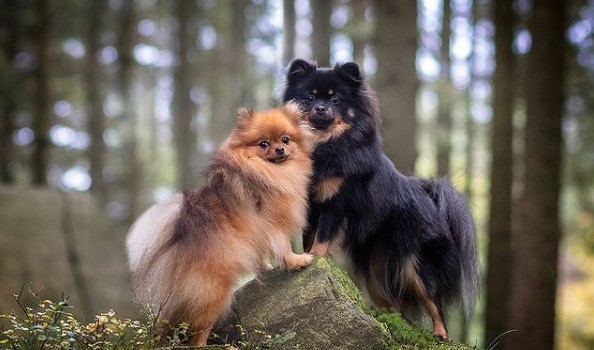 The Pomeranian looks like a child’s toy. This fluffy bun will become a loyal friend and a sonorous bark will brighten up the most gloomy day. 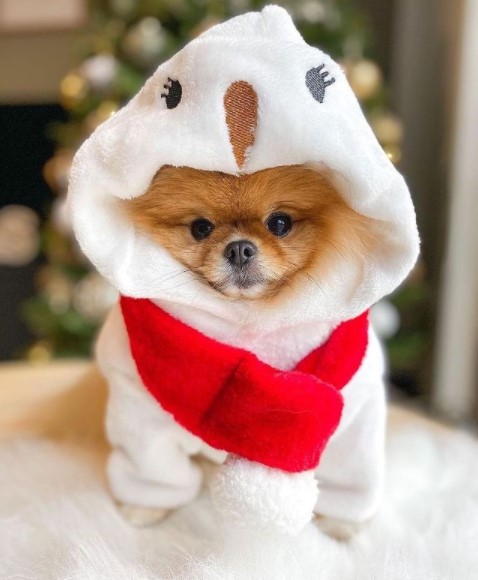 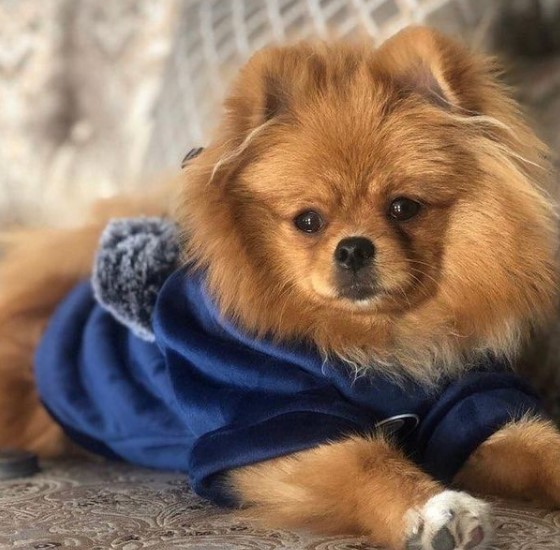 The Pomeranian Spitz got its name thanks to Pomerania – a region in northern Europe on the Baltic coast, where the dog was first bred. It is worth noting that the ancestors of the pet are large Spitz, which weighed from 10 to 15 kilograms, that is, much more than the current dwarf Spitz.

The Pomeranian is the cutest animal with unbridled curiosity. Dogs of this popular breed weigh only 3.5 kilograms. These are animals with pronounced eyes, intelligence, and temperament. This tiny dog ​​is very intelligent and active. The owners of such a pet will say with confidence that he has more courage than his large relatives.

Although the dwarf Spitz adores his family, he will not sit at his owner’s feet for long. Since the dog is very active, he loves to run on the lawn at home. The Pomeranian is a great option for those who want to have a tiny dog ​​that would have the character of a large shepherd or sled dog, from which this breed is derived.

It would seem that, due to its small size, even the size of an apartment is enough for a dog to throw out all the energy. Nevertheless, the Pomeranian loves to run in the park, lie in the leaves, and play with their relatives. This is a sports dog, so Spitz quite often takes part in various sports competitions. The size of this breed allows you to keep a dog in an apartment without any problems, but the animal will feel most comfortable in a private house with its own yard. Naturally, the dog cannot be kept on a chain or in a separate room. The Pomeranian must live exclusively with his family.

Like many other dwarf breeds, the Pomeranian is a dog that can be difficult to train at home. When buying a puppy, you need to know all the features of care and education. Be sure to ask about the health of the puppy himself, as well as his parents. In the future, all these nuances may be useful to you. If the breeder says that the animal and its parents were not sick with anything, then it is better to refuse the purchase. Most likely, they lie to you! Be sure to ask for documents on the health of the animal and parents!

The Pomeranian can be weaned from the mother as early as 8-10 weeks, but most try to keep the puppy with the mother until 12-14 weeks. This will help ensure that the puppies are well-formed and ready for an independent life away from their mother. 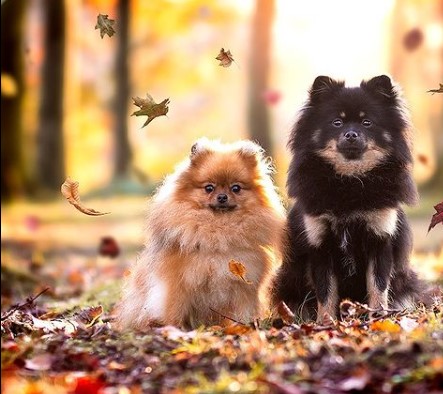 The Pomeranian Spitz comes from the so-called Peat Dog, which existed in ancient times, which is considered the progenitor of not only Spitz but also many other breeds, for example, the Schnauzer. In Northern and Central Europe, dogs similar to Spitz have been known for a very long time. They were of different sizes and varied colors. Medium-sized dogs were bred in Mecklenburg and in the vast Pomerania.

These cute animals first came to England thanks to the Princess of Mecklenburg, who later married King George III. The breeders there went further and began to radically change their growth downwards and their wool upwards. Small, fluffy dogs weighing about two kilograms became so famous that the British began to consider themselves the founders of the breed. In the place of its breeding, this breed was named Pomeranian. In 1870, the English Kennel Club approved the breed and a year later its representatives took part in the dog show for the first time. More than twenty years later, in 1898, the Pomeranian Club in England developed the first breed standard.

Despite this, the breed was actively developing in Germany, and in 1899 the German Spitz Association was founded, which streamlined the differences in the breed in terms of the size of the German Spitz population. First of all, Spitz was divided into large and small, which was not enough, and later it was decided to divide the breed into five types in size: the largest wolf, then large, medium, small and dwarf (decorative).

In 1895-1910, a European breed standard was developed, which was later recognized by the International Cynological Federation. For all, without exception, Spitz of any size, the same anatomical structure was approved with a difference in height, which must correspond to the sample. Some problems have arisen with the pygmy pomeranian. The ICF did not recognize the English Pomeranian as an official breed but took into account its weight (given that the English standard does not take into account height), which corresponds to the German Small or Miniature Spitz, depending on the weight of the individual. After some time, the ICF approved the name Pomeranian as the English-language name for the breed.

We admit that dogs from England look more impressive than their brethren from Germany. Thanks to their beautiful coat, European breeders are happy to breed this breed. Probably, it is precise because of its external attractiveness that the Pomeranian is the most popular in our time in comparison with the German. The German Spitz breed standard has been updated many times, and the biggest changes concerned the coat color of the dwarf Spitz since the dogs imported from England gave a very diverse offspring, the color of which was not originally included in the breed color standard. 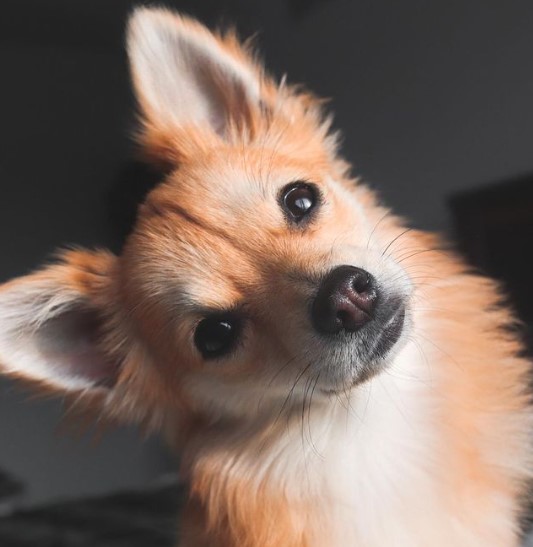 The weight of the Pomeranian is about five kilograms, but despite this, the inner world and character of the dog are very rich. The Pomeranian loves to observe the world around him, he loves to sit on the windowsill and bark, thus showing his attention to everything that happens outside the window. Representatives of this breed are perfect for people who are ready to play with the dog and give it their warmth and attention.

The German Spitz has always lived close to humans, he was used as a guard and herding dog, he perfectly adapted to family life and, if necessary, became an excellent companion. Over time, this led to the Spitz becoming very attached to their owners.

The Pomeranian is the smallest of its brethren, however, like them, he is very smart. He is full of energy, is constantly in motion, brave, and is not at all associated with a fragile, neat salon dog, which it seems at first glance. In fact, this animal is quite noisy, cheerful, and friendly, it knows how to perfectly adapt to any environment. Infinitely attached to the whole family, in relation to strangers he behaves rather a with restraint, he needs some time to get used to new people and trust them. 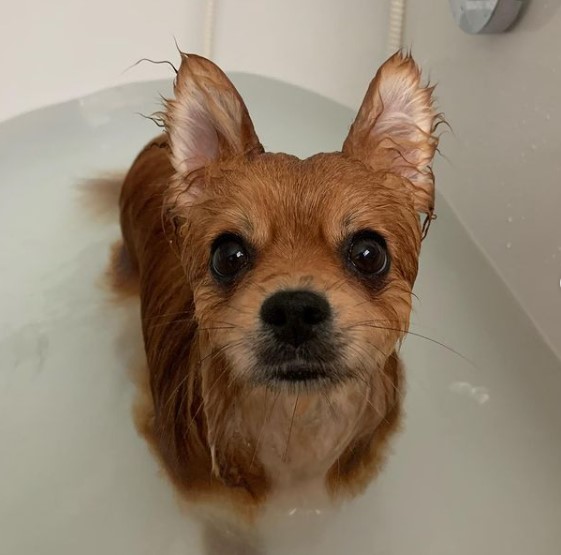 As for grooming, you should pay attention to the fact that the dog has a very dense double coat, therefore it requires special, careful, and regular grooming. The rest of the dog’s care is not difficult. The animal is prone to barking, sometimes it is quite difficult to stop it!

The Pomeranian is a moderately molted breed that occurs once a year. In this case, dogs may begin to shed from the experienced stressful situation. For normal grooming of the coat of this breed of dog, it is necessary to comb the coat twice a week. This amount is optimal for keeping hair healthy and preventing hair from forming in the home. Pomeranian is usually trimmed, but trimming is done on certain areas of the body (paws, muzzle, ears).

Bathing is carried out as needed. Some dogs are bathed every week, others monthly or even several times a year. Everything will depend on the degree of contamination of the coat of a particular dog.

Small breed dogs are prone to dental problems. Therefore, they require weekly cleaning. Regular cleaning of the mouth can help prevent tooth loss and lead to a pleasant breath.

Check your pet’s ears regularly (every week). They should be free of suspicious discharge, irritation, or inflammation. The auricles are treated with a special solution that can be purchased at a veterinary pharmacy. 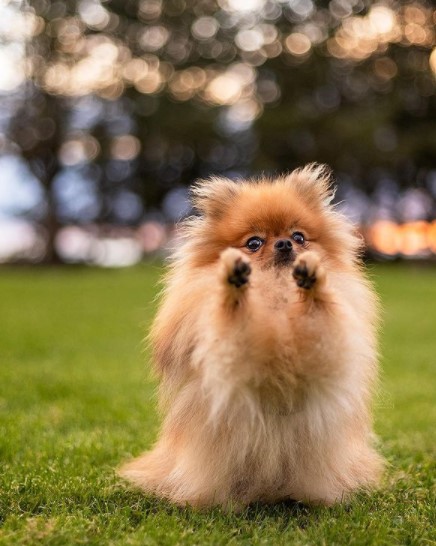 The Pomeranian is one of those dogs that are not very easy to train and train. They are persistent, do not like to obey, they are stubborn. That is why a demanding, persistent, self-confident coach is needed for training. To smooth out such a somewhat eccentric character, early socialization of the pet is necessary.

During training, it is imperative to resort to praise and rewards in the form of goodies. The training itself should not be protracted, otherwise, your pet will get bored of it all. Avoid any form of aggression or negative reactions. If you feel that you cannot cope with the training, then contact a professional who will definitely help you.

The Pomeranian, by nature, is an unfriendly and distrustful dog. She doesn’t like strangers, she is often frightened. Therefore, the issue of early socialization is as important as the issue of caring for a pet. Socialization should begin from the first day Spitz appears in the house. If this process is started at a later age, the result will not be as successful.

After learning the basic commands and rules of behavior, you can move on to more complex tasks. For example, you can train your pet in agility. Don’t forget that the Pomeranian is very active. Therefore, all exercises during training should also be active. If the dog gets bored, then all your attempts will be in vain. 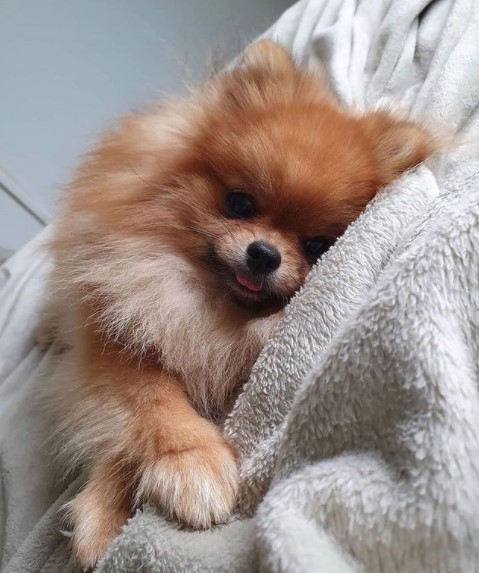 Dogs of the Pomeranian breed live long enough and, with proper care, can even live up to 14 years. Even in old age, they are in good health. Despite their apparent fragility, they are not very pampered dogs, they prefer an active way of life, they tolerate winter weather well, but the summer heat and prolonged exposure to the sun are worse. The most common health problems that occur are usually directly related to short stature. Also, like all decorative dogs, problems with the locomotor system (dislocation of the patella or any kind of injury) appear. Injuries often occur due to the fault of the owners, who must be very careful not to miss their pet or step on it. There are also very stable baby teeth, a tendency to form tartar, tracheal collapse, and alopecia (hair loss), which is equally common in all Spitz.

It should not be forgotten that this small pet loves to eat and has a great tendency to be overweight, which can go unnoticed for a long time due to its lush coat. That is why you should control the amount of food that your pet eats, and to make him more comfortable, divide the daily portion into 2-3 parts. The problem of excess weight is reflected not so much on the appearance of the Spitz but on his health. The treats that you reward your four-legged pet with during training should be symbolic and used interchangeably with praises, your pet will tolerate such a restriction in food much easier than treatment for excess weight. 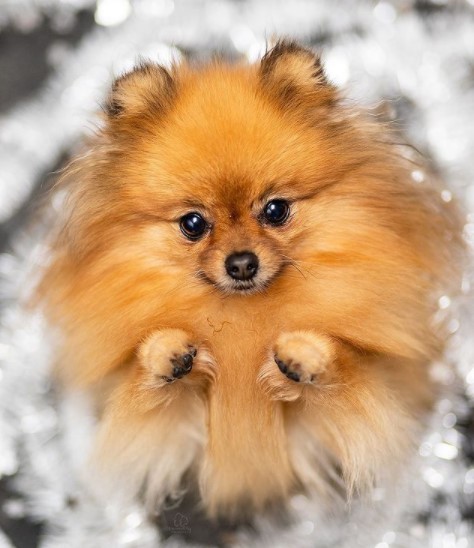