Among the representatives of the tropical fauna, there are a lot of truly beautiful animals, often painted in surprisingly bright colors. Perhaps this is due to the fact that the very nature of the tropics is distinguished by a riot of colors. For example, in tropical latitudes, exotic birds painted in incredible shades are found, as well as exotic lizards, one of which will be discussed in this article. 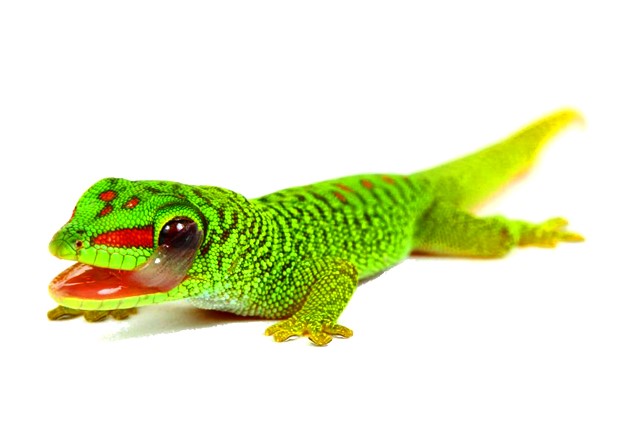 In size, Madagascar geckos are usually not very large – 18-23 cm in length. But the Giant Day Gecko grows up to 30 cm. In addition to bright red spots on the sides along the back, the reptile has wide red stripes on the sides of the head, turning into the corresponding edging of the eyes. The same large red spot is located in some subspecies of the Madagascar gecko on top of the head, and on the back, these spots tend to merge into short transverse stripes. Males are larger, the base of the tail is thicker, the head is wider than that of females, and there are also yellowish anal pores. Some other species of daytime Madagascar geckos have their own characteristic features in color.

In nature, daytime Giant Day Geckos live no more than 10 years, and in a well-equipped terrarium they live up to 20 years. These reptiles move very actively, despite the absence of claws on their paws and, due to their diurnal lifestyle, have a round pupil.

The biotopes of the Giant Day Geckos are very diverse. They can live in wet and dry forests, bush vegetation, and human settlements. But, like all other reptiles, it is common for geckos to hide in shelters, which can be hollows, stone heaps, spaces under tree roots, and even crevices in houses. Although they prefer Giant Day Geckos, they are still trees, hiding among the foliage and becoming invisible due to the natural green shades prevailing in the color. However, during the day, walking around the city, Giant Day Gecko can be seen on the wall of a building, and even on the city road.

Giant Day Geckos are incredibly mobile. Therefore, the terrarium for them is advised to choose a vertical one. Lizards move easily along its walls and ceiling. It is already clear that these geckos are exclusively diurnal. They are saved from enemies by a protective coloration, which helps to merge with the surrounding nature, as well as easily torn skin so that the reptile simply slips out of the enemy’s claws. 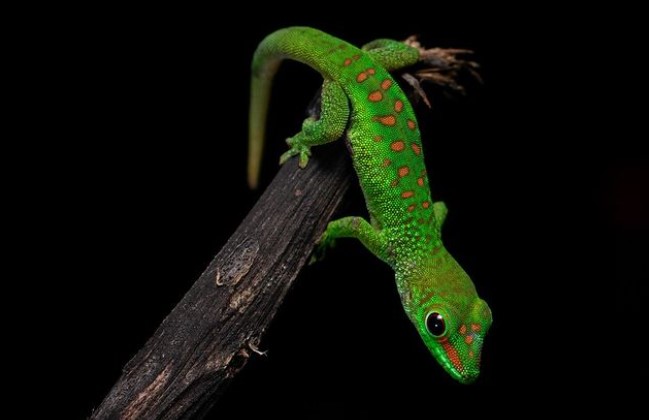 Giant Day Geckos are territorial creatures, and they prefer to inhabit one by one. It often happens that one Giant Day Gecko has its own personal tree, on which another lizard is unlikely to settle, and these trees are located at a sufficient distance from each other, at least 30 meters. Several individuals of the Giant Day Geckos can occasionally meet only in the pandanus – an exotic plant known as bromeliads, which is a densely populated world of different creatures – insects, small amphibians, and reptiles. Rainwater collects in the leaves of bromeliads, so the humidity of this habitat is the most suitable for reptiles. And, finally, the rarest variant in nature is Giant Day Gecko colonies. Giant Day Geckos gather in groups only when they live in artificial structures, for example, under bridges, in ruins of buildings, people’s homes, or even in garbage dumps. This is easily explained by the fact that in such places, each lizard receives a sufficient amount of resources necessary for life – water, heat, food, and shelter. However, in the colonies of Giant Day Geckos, fights are common, however, the weaker lizard prefers to run away.

Interestingly, male geckos strive for loneliness, even from the point of view of the surrounding area. They occupy a territory from which they do not see other males and are invisible to them. The same territoriality is observed in the behavior of females of Giant Day Geckos, but not as brightly as in males. During the day, these lizards nestle on tree trunks exposed to the sun and absorb heat. By the way, in the open sun, the body temperature of Giant Day Gecko rises by several degrees.

A spacious upright terrarium is suitable for keeping Giant Day Geckos. It is desirable that space is at least 80 liters for a pair of large lizards. Particular attention should be paid to lighting. Geckos are diurnal animals. In the retina of their eyes, in contrast to nocturnal species, there are special elements of color vision – cones. Thanks to them, geckos are able to distinguish all colors of sunlight. Therefore, priority should be given to full-spectrum lamps. Good results are obtained by using Repti-Glo (2.0 or 5.0) fluorescent tubes in combination with Life-Glo or Power-Glo. This combination is not only comfortable for the animals but also promotes the good growth of live plants in the terrarium. Repti-Glo also provides an ultraviolet component. The duration of lighting should be 10-12 hours per day. 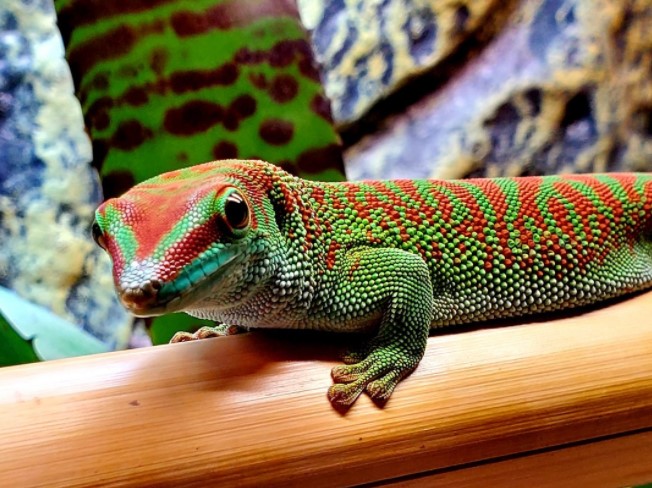 In nature, these geckos are inhabitants of rain forests and therefore need high humidity. A densely planted terrarium is the ideal habitat for them. It will not be difficult to maintain humidity at 70-80% in it. You just need to water and spray the plants on time. In addition, the leaf axils with accumulated water make an excellent drinker for Giant Day Geckos. A separate container of water is also needed, though.

It is also important to provide comfortable climbing branches. Each inhabitant of the terrarium should have at least one shelter. To do this, you can use small hollow logs, as well as large-diameter bamboo pieces with holes drilled into them. The decoration of the walls of the terrarium is not critical. To prevent the escape of animals, you need to carefully check the container for large gaps and holes that could have formed during the lighting and other equipment connections. Giant Day Geckos can run across the ceiling with incredible ease and speed. The breeder should be extremely careful when feeding animals or cleaning the container.

Giant Day Geckos are generally omnivorous. They do not refuse either from the plant food available on the trees – fruits and flowers, or from live food – small lizards, invertebrates, insects. And in the environment of Giant Day Geckos, there are sometimes cases of cannibalism, when an adult eats young animals. In terrariums, feeding on Giant Day Geckos follows the general rules for reptiles. They should be given crickets, cockroaches, mealworms, locusts, and other safe and non-toxic insects, and newborn mice. 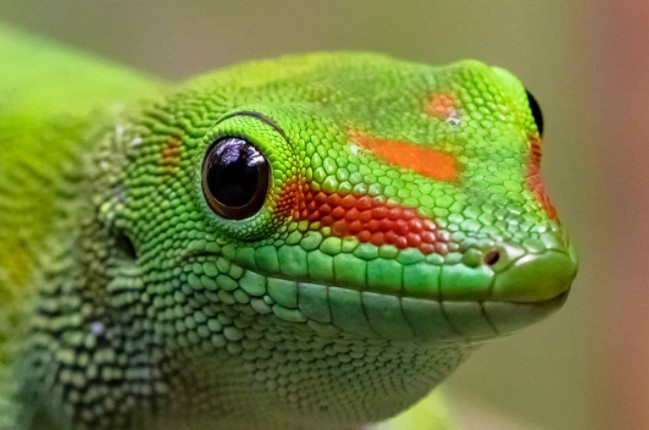 From plant food, geckos enjoy themselves with lettuce, dandelion leaves, and house plants – begonias, tradescantia. Among the juicy fruits suitable for food, soft varieties are preferable – bananas, ripe pears, berries. Some owners even feed Giant Day Geckos with honey and baby fruit mixes. But more emphasis should still be placed on animal food.

The recommended frequency of feeding lizards is at least once every two days. Zoologists do not advise overfeeding them, since, for the normal assimilation of food, the gecko must have time to get hungry between feedings. And of course, do not forget about the variety of the diet – a little of everything with various mineral supplements and feeds for reptiles. Young Giant Day Geckos can be fed in the same way as adults, only in reduced portions.

Giant Day Geckos, like most reptiles, are egg-laying animals. Two years after birth, they acquire the ability to reproduce and begin to reproduce after wintering. In terrariums, wintering for Giant Day Geckos is artificially arranged so as not to interrupt their seasonal cycle. Then they are planted together for mating.

In nature, males of arranging rather brutal marriage fight for the chosen one. The female prepares for laying within a month after fertilization. In nature, Giant Day Geckos make clutches directly on trees – in hollows, leaf axils, and other possible shelters, only occasionally laying eggs in the ground. It is impossible to call female geckos especially fertile, the number of eggs is 1-2. But during the season, laying can be done up to 8 times with a period of a month.

Clutches of terrarium geckos are placed in an incubator, where they develop until the young are hatched. The higher the ambient temperature, the sooner the Giant Day Geckos will hatch. The average incubation period is 2 months, with a delay due to temperature – 2, 5 months.

The birth of offspring is also interesting. Baby geckos rip the shells open with their egg tooth, but they are not in a hurry to go out immediately, and they can stay in the egg for a whole day, with only their head exposed. The offspring of the Giant Day Geckos are born unusually bright, acquiring a more restrained adult coloration over time.