Just like humans have dreams, science has it that dogs have dreams too, and it is not very different from how humans dream. Sometimes you have often seen your dog bubble and growl or your dog’s paw move when it is fast asleep.Nightmares in Dogs

Dogs dream just likes us, and it is also right to say that dogs can have nightmares also. For instance instead of a dog chasing a rabbit up a hill, maybe in their nightmare the rabbit is the one chasing them up, and they end up running from it. Let’s see why dogs may have nightmares and how to handle them if they are having their worst dreams.

Signs of a Dog Having Nightmare 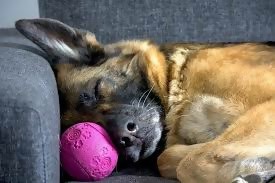 Dogs may exhibit a few common signs when having or experiencing a nightmare. If they have a good dream, the paws of your dog may be twitchy, playing around and moving their ears up and down or sideways or flapping them, or you can notice their eyes moving and twitching eyelids. The dog will have little signs of any stress or fear whenever in their sleeping mode and they will tend to be very relaxed and satisfied during sleeping.

Contrary, when your dog is experiencing nightmare, you may realize that they do a lot of growling in their sleep and having twitching paws together with signs of moving eyelids, barking, or even howling while they are dreaming may also be heard and seen. These signs could show that there is something disturbing or frightening them while they are dreaming. Your dog also could be seen shaking, whining and whimpering while dreaming.

Sometimes when you see or notice your dog wake up suddenly from a deep sleep as something has just triggered or pricked them could also be a sign that your dog was having a nightmare. It goes hand in hand with how humans suddenly arise from a nightmare at midnight only to find they are very hot, sweaty and tired. At times when you observe your dog after they wake up you can always feel that they have wet paws and have damp.

Some of the body language to show that your dog is having a nightmare is:

Other signs that suggest that your dog is having a nightmare are:

History of Dogs Having Nightmare

After the confirmation that rats do dream, more questions for complex animals such as dogs started to rise, and research shows that animals just like dogs do dream. From the research perspective, the results show that animals in general for example dogs do actually dream about the activities that occurred during daytime or a similar activity that had happened earlier. For instance they can dream about who owns them, their day to day activities, etc. Their activities can either be positive or negative hence not all are good.

Nightmares may come from things that the dog dislike or hate or fear a lot. For example things like getting chased away by another animal, taking a cold or hot bath, seeing the groomer, etc. Dogs also preserve a lot of memories, and they also have good memories; hence dogs that have been adopted may have nightmares about events that happened when they have left alone or hurt.

In a particular situation whereby one person happened to have adopted a dog that had a rough going in its life before it was adopted. Most of the nights the dog could wake up suddenly at night, screaming and barking so loudly that the owner could wake up from his sleep. The dog used to make a lot of noise that was so terrible which made the owner think that the dog was in so much pain or something was stressing her, However in real sense the dog only was waking up from a terrifying nightmare most likely from the ancient events that occurred in its past life which happened to just traumatize the animal.

What Science Say about Dogs Having Nightmares

Up to now, we know that your dog can dream, have nightmares, and what they can have nightmare from. So what actually does happen in a nightmare? First of all dogs just like humans have a similar pattern of how they dream. Their brain (dogs) are just structured the same way as humans hence their dreaming process is same as humans.

There are different stages of sleep that a dog will undergo

In the SWS stage of sleep, the dogs’ mental activity and brain process is reduced, but the reaction of the body and muscle is still the same you may think they are awake. After the SWS stage the dog will then fall into the REM stage of sleep whereby the body of the dog will fully calm down and relax, but the mind ability still at its full capacity, and the thoughts are passing through its mind very rapidly.

At REM stage is whereby most of the dogs always experience nightmares. Here the nightmares in the dogs’ mind will fell very rapid for a moment; that is why we will start seeing the dog’s body reaction, for example, growling, snarling, twitching paws, and even waking up and moving around time after time. Research about dreaming dogs shows that after the dog enters the REM the dog will start to dream about ten to fifteen minutes from the time they fall asleep.

How To Train Dogs That Suffer Nightmares

Nightmares are normal, and one cannot stop a dog from experiencing a nightmare, but there are a few things that can be done to help a dog feel comfortable when they experience nightmares regularly.

The first precaution to remember is to desist from waking them up from a nightmare or a dream.  When you wake them up from a tense dream they may tend to get confused and disoriented, which may still think that they are still in their dream; as a result it may lead to safety issues between you and the dog itself. The dog might tend to retaliate or resist by biting at you without intending or even injure themselves by waking up very quickly. This also may interfere with their sleep pattern that may end up making them tired, cozy after getting up, and hence it is very important to let them sleep whenever they need to.

A person can also invest in a dog appeasing pheromone (DAP) collar, which is a popular solution for a dog’s anxiety problem issues preventing unwanted behaviors such as

inappropriate barking, sudden biting, or marking. This will help them remain calm and maintain a relaxed state. If you notice your dog is in the middle of a nightmare try to call them by their name gently. In this way you will wake them up but in a more relaxed way which is nonphysical. By applying this process of calling their name gently always bring their mental activity process back to normal in their present life away from the dreaming state. It will also help them be assured of your presence around them hence they won’t fear

Playing soothing music around them is another way of calming the environment around; this will help the dogs be calm and relax at the time they sleep.

Cat Sleeping Positions and What They Mean