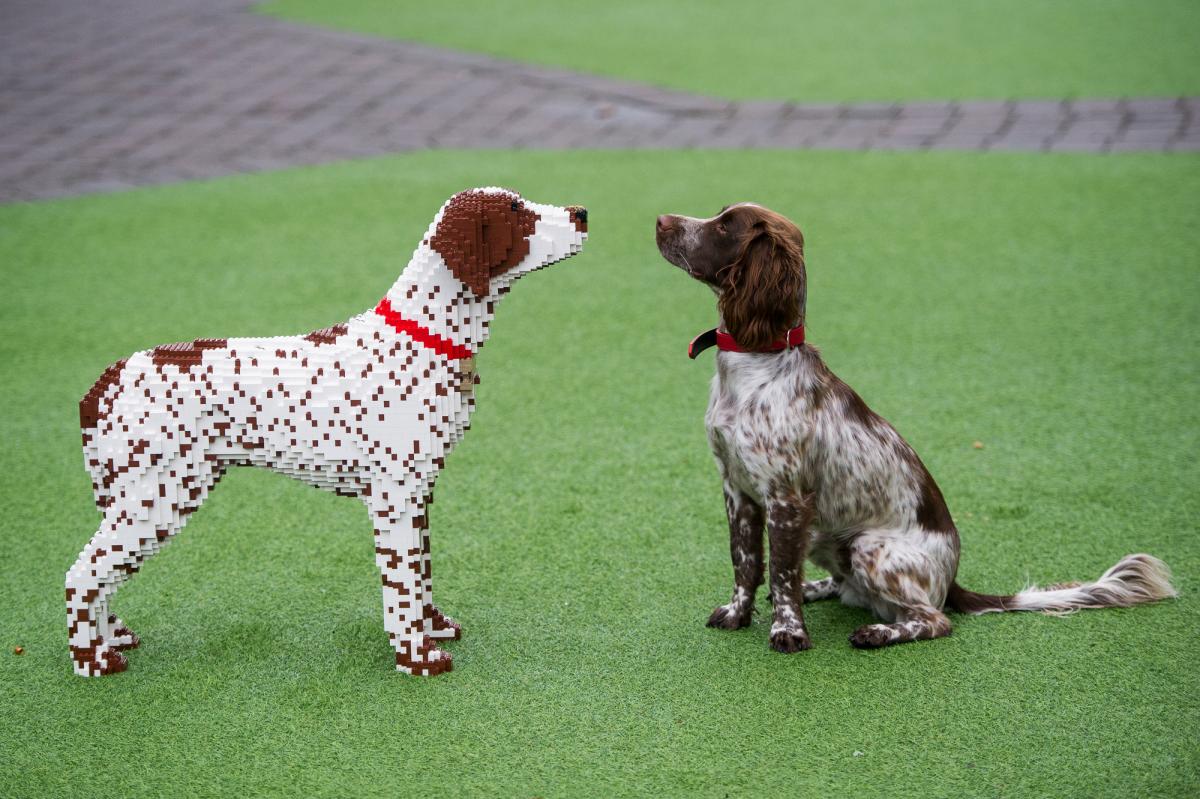 Dogs are man’s best friend, but there’s more to it as well. They’ve long since become part of our culture and our world. It’s not surprising we’d have them in LEGO as well — after all, LEGO is all about imagination and play. What’s more playful than a family dog?

The great thing about LEGO is that it’s so fun and inspiring to the imagination. We can make anything with these little bricks, and that includes realistic things like trees, ships and… pets! Of course, LEGO dogs would be a popular feature, so let’s take a look at ten awesome MOCs (“my own creation”, LEGO builds that don’t follow a standard LEGO set) featuring man’s best friend.

1. Jack Russel Terrier by The Actionfigure 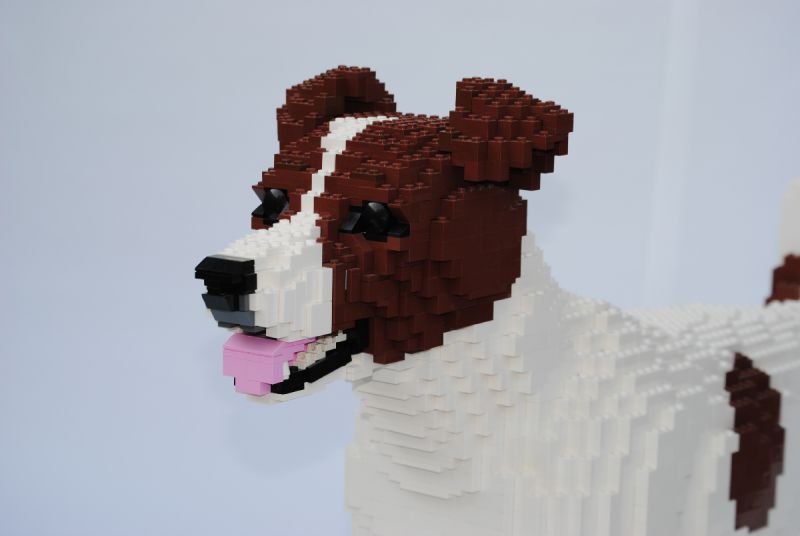 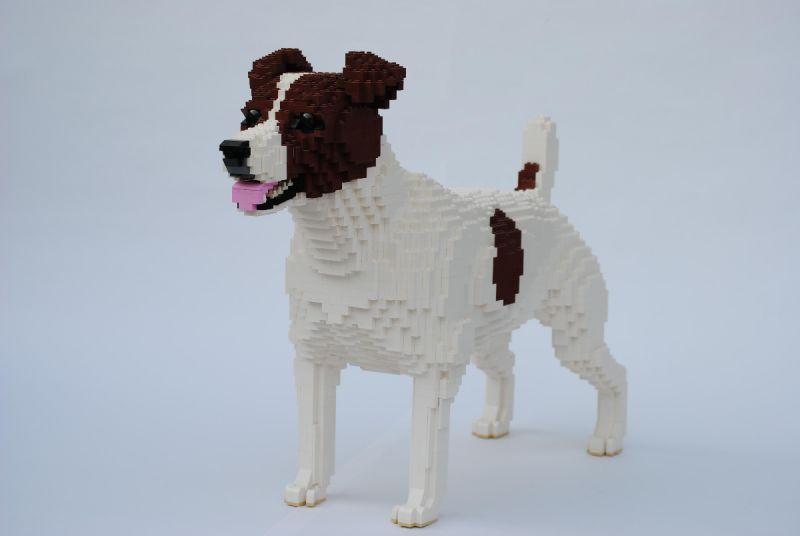 Jack Russels are playful and intelligent dogs, a favourite among pets. Who doesn’t like them? It’s not surprising we’d get them in LEGO format as well. This MOC (“my own creation”) by The Actionfigure is very realistic and just begs to be petted on its plastic head! It’s lifesized and a little stocky for a Jack Russel but still looks very sweet and adorable.

2. “The Struggle” by Ron Dayes 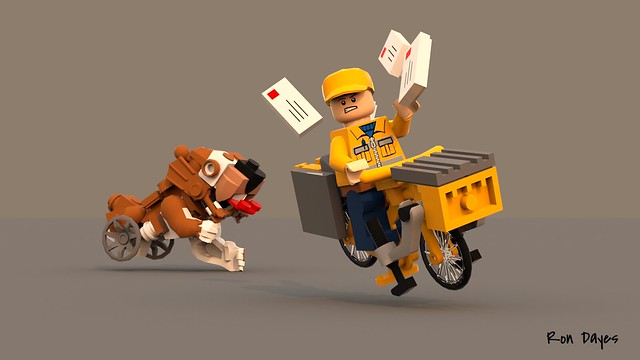 This one is so cute on so many levels! While the whole is fairly small (it’s minifig-sized after all), the amount of detail is amazing. The pitbull (identified by the creator as “Ms Miller’s”) runs after the postman… even after losing function of its back legs. It’s very sweet to see a disabled dog in such an active, sweet build. 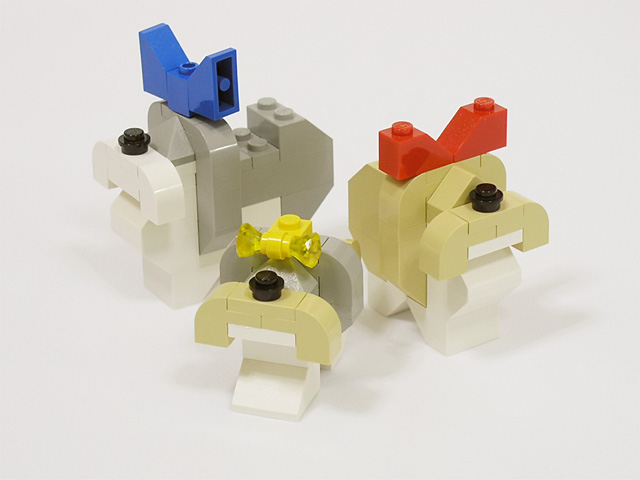 Who doesn’t love Shih Tzus? These small, friendly dogs are delightful in every way. They’re great companions as well! For those of us who can’t for whatever reason have one (or who just love them that much), we have these little LEGO Shih Tzu dogs. While the build is nowhere near to the realism of some of the entries in this list, they’re still very cleverly done and look a lot like the real thing.

4. Michael the Daschund, by Ken Ito 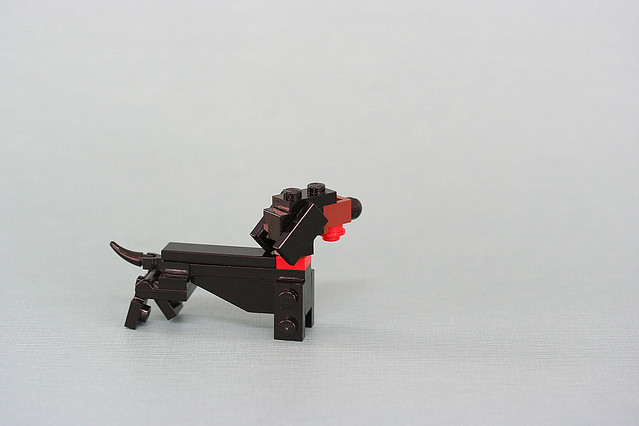 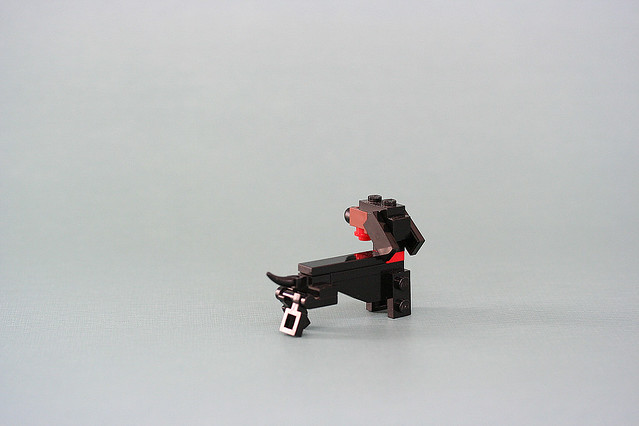 The Daschund is a small, fierce breed, a hunting dog that is also an adorable household pet. This small LEGO build is rather simple to make but looks really good and surprisingly realistic as well. Michael is definitely a good toy pet or desk decoration for your favourite Daschund lover. 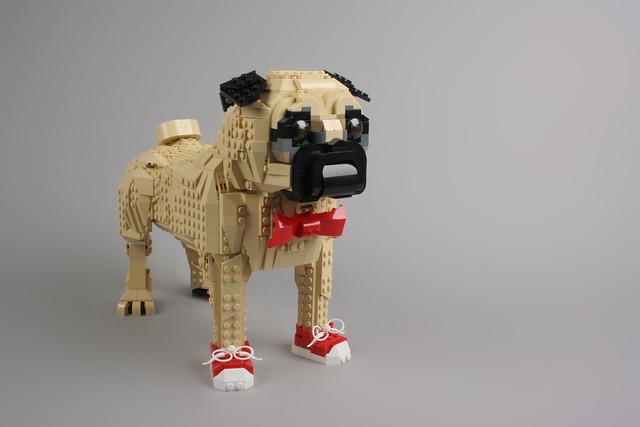 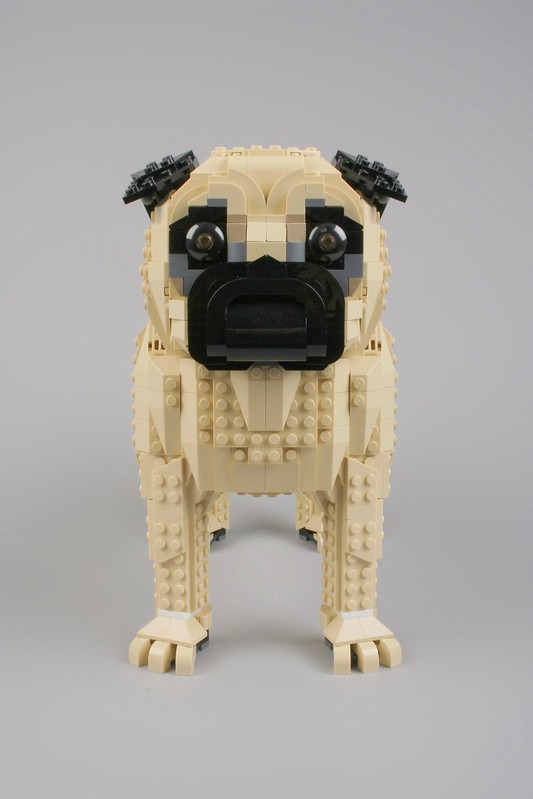 Who doesn’t love pugs? These dogs are an international sensation, so of course, there are LEGO versions of them as well! This one by Marcos Bessa is impressively realistic and also quite funny with his shoes and bow tie. These are removable as well, which makes it look even more charming in its natural look. 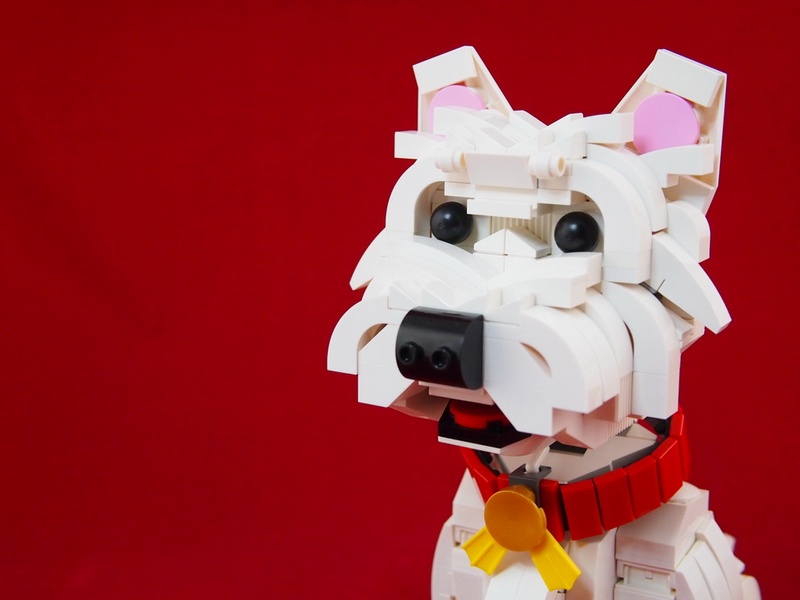 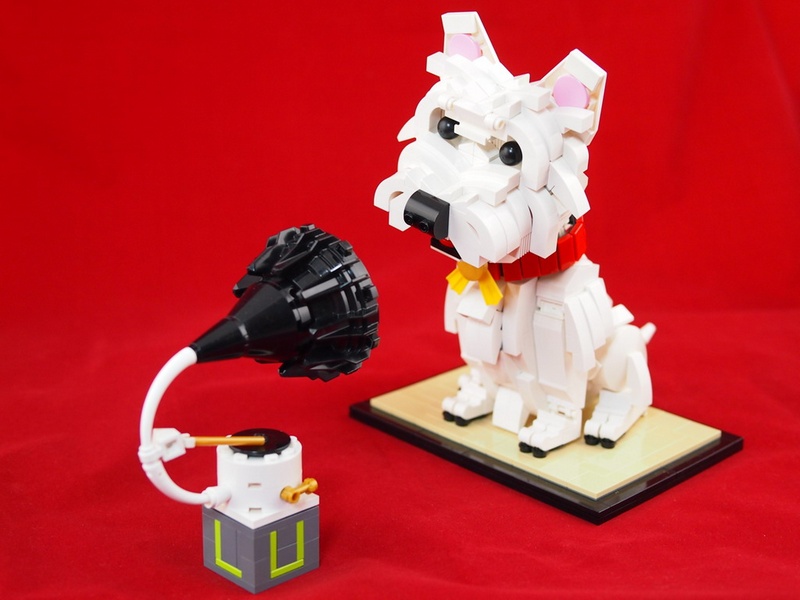 This one comes with a story: this beautiful Westie is based on a female dog belonging to the parents of the creator. The real dog lived 15 years with the creator (CCY 8086) and was very much loved, a true sister. The LEGO Westie, then, is a beautiful homage to the real dogs we love. The build itself is very cute, posable, and of course, very expressive and realistic. It shows very well what West Highland White Terriers (“Westies”) are about. 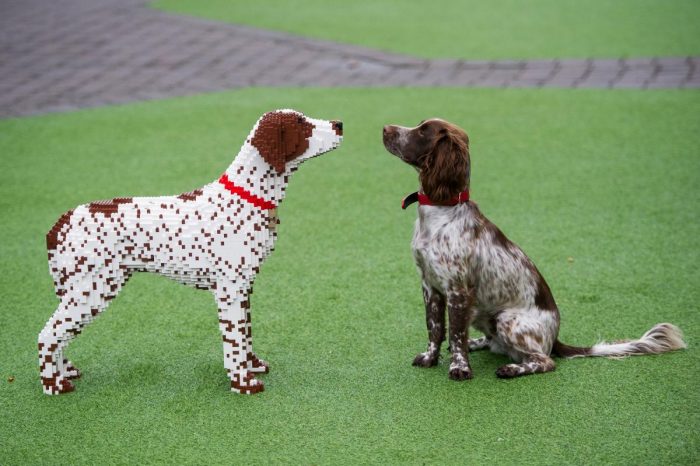 Sully is a life-changing, beautiful Sprocker Spaniel who earned a prize as Scotland’s top dog. Owned by Gavin and Kerry Harvey, Sully was fundamental in Gavin’s recovery from an injury. The dog soon formed a deep friendship with Ella, the couple’s daughter. It earned a LEGO version of itself, being featured in full size after Legoland’s Best Furry Friend contest.

8. Year of the Dog by ZiO Chao 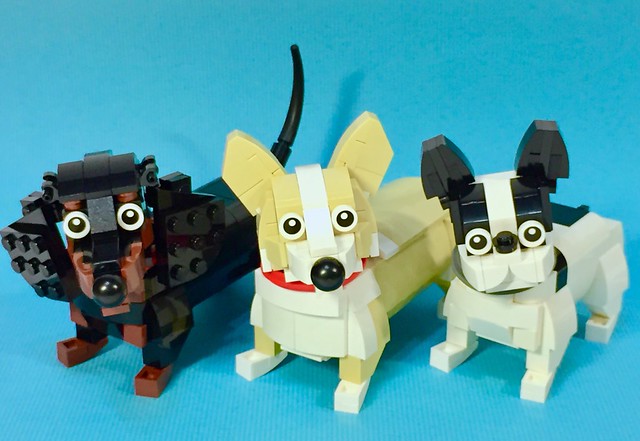 2018 is the Year of the Dog, and LEGO builder ZiO Chao honours this with a collection of LEGO dogs! There are six in total, but these three are our favourite: the French Bulldog, the Daschund, and a Corgi.

This beautiful sculpture by LEGO artist Sean Kenney is as realistic and expressive as it gets, even though it only has bricks in a single colour. Still, the details on the dog’s position, mouth and even ears are enough to impress and charm at the same time. 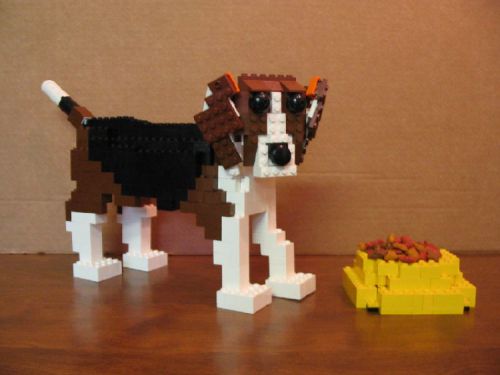 This Beagle may not look as realistic or sophisticated as some of the other builds in this article, but look at him! Look at those sweet ears! This build still manages to capture the spirit of the Beagle, the cuteness and expression of this breed. A very good job! 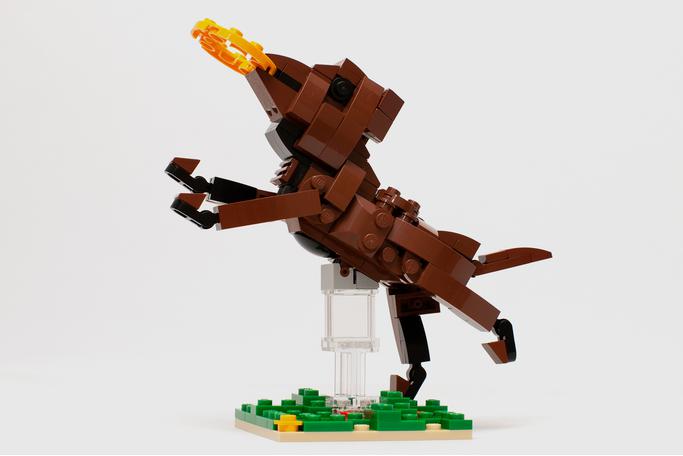 One of the best things you can do with your doggo is to spend time outside with them. And what better way to do that then to play fetch? This “Frisbee Dog” LEGO MOC was created in memory of an old dog’s younger years. It represents a time when this furry friend was still able to blitz around and play fetch with its owner. The build captures a dog catching a frisbee in its mouth while suspended in midair. It’s most definitely a happy site to see. See the full feature of this MOC on the LEGO news website Brick Pals. 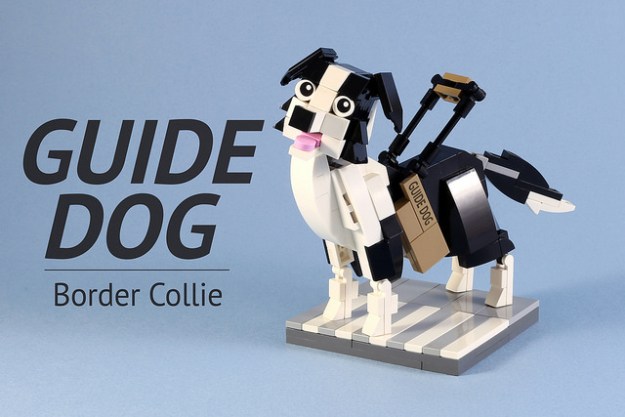 This guide dog is ready and at your service. Guide dogs are of great help to disabled people, ensuring their comfort and safety. This MOC is of a border collie who’s more than eager to assist. With its tongue is sticking out, you can almost see its tail wagging. The animated expression on this LEGO MOC is absolutely adorable. This border collie’s handle bar is in the upright position, and he/she is ready to lending a helping paw to anyone in need. See more amazing animal LEGO MOCs here.

So these are 10 of our favourite LEGO MOCs featuring dogs! As you can see, there is a lot of stuff you can do with LEGO.