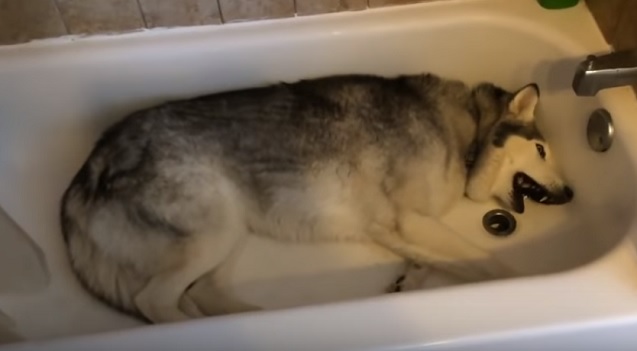 Most dogs don’t like to get into the bathtub because they hate getting a bath.

But this funny Husky must really love water because he is lying down in the tub and throwing a tantrum because his owners won’t turn on the spout.

He lays their stubbornly and howls and whines and sounds like he is dying.

The owner wants him to get out and go for a walk, but the dog doesn’t want to do that at all.

He wants to take a bath.

His whines and howls get louder and louder as he complains and refuses to get out of the tub.

What’s an owner to do when their dog is being a big baby?

All they can do is try to entice him out and that isn’t working.

The dog’s name is Zeus and he sure is acting like he is a god in charge of the situation, but eventually he has to get out of the tub when he realizes his tantrum is not going to be successful.

But in the end, he gets out of the tub and we see him go off with another dog and his owner.

Health issues of Goldendoodles? Here are the things you need to...