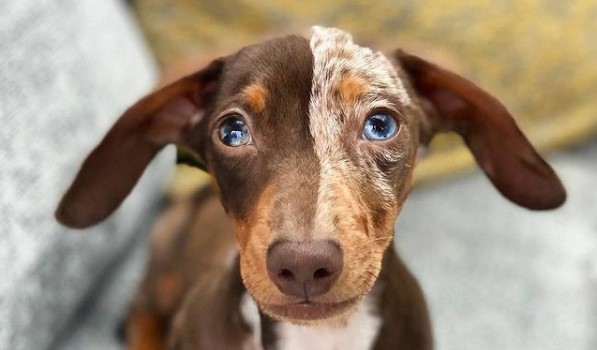 Dachshund is an example of an amazing contrast between a seemingly unremarkable appearance and the perfection of internal content. 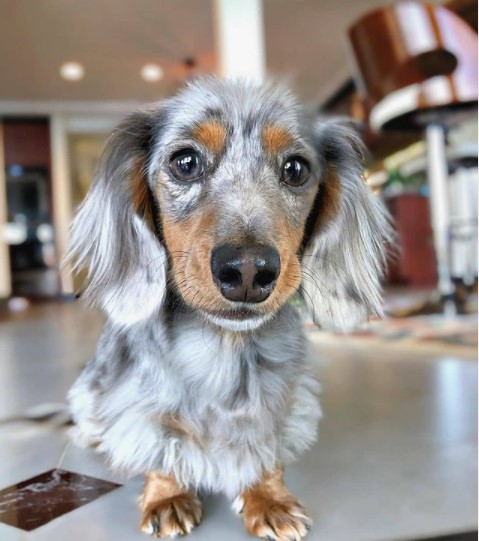 The problem caused by badgers and other burrowing animals has occurred in many countries. Therefore, the selection of short-legged dogs with an elongated body had a special need, because only such dogs could drive the pest out of the hole. The first representative of such dogs was the Dachshund breed, and it appeared in Germany. For 500 years, dachshunds have spread throughout the country. They were prized for their keen sense of smell, small size, tenacity in digging, and courage in the face of a formidable enemy.

Dachshund may be the smallest representative of hounds, but she is undoubtedly the smartest of them. The first thing you pay attention to is the dog’s physique. People who know this breed well appreciate the Dachshunds for their character, intelligence, hunting abilities, and absolute dedication to their owner.

Dachshunds are very active and funny dogs that are sometimes difficult to train at home. They are distinguished by their waywardness and sufficient anger, inherent in hunting dogs, in connection with which many families with children do not dare to start such a breed.

These animals are wary of strangers, usually, at the slightest suspicion, Dachshund barks loudly, sometimes even at the rustling of fallen leaves. The peculiarity of barking at the slightest reason is the reason why the dachshund should not be left alone in the yard or kept in the fresh air.

This breed originated from dogs that were bred to fearlessly pursue prey that hides in burrows. Therefore, the Dachshund has such qualities as aggressiveness towards other dogs, persistence, and a special love for digging.

Dachshunds are of two types: miniature and ordinary. The weight of an ordinary Dachshund can be from 7 to 14 kilograms, and a miniature one – less than 5 kilograms. Also, these dogs differ in three types of coats: smooth-haired, wire-haired, long-haired. Representatives of all types of wool can have different colors: monochromatic, variegated, with light spots, etc.

Basically, Dachshunds have proven themselves to be family dogs, the main thing is to control them so that children when playing with dogs, do not cause them inconvenience. Such dogs adapt well, they are not particularly whimsical, therefore they are suitable even for lonely people and retirees.

The color of the Dachshund, as already mentioned, is very diverse. Solid red is probably the most common color, but cream, black, or chocolate are also common. You can also find fawns or apples in Dachshunds when dark spots are combined with contrasting red ones.

Dachshunds are always on the alert and they differ with a piercing bark. These qualities make these dogs excellent watchdogs. It would be nice for the owners of these dogs to have ramps or low steps near the home furniture so that the Dachshund, jumping off the sofa or bed, does not hurt its back. It is also necessary to hold the Dachshund correctly: holding it by the back and front of the body, otherwise, you may injure your pet’s back. 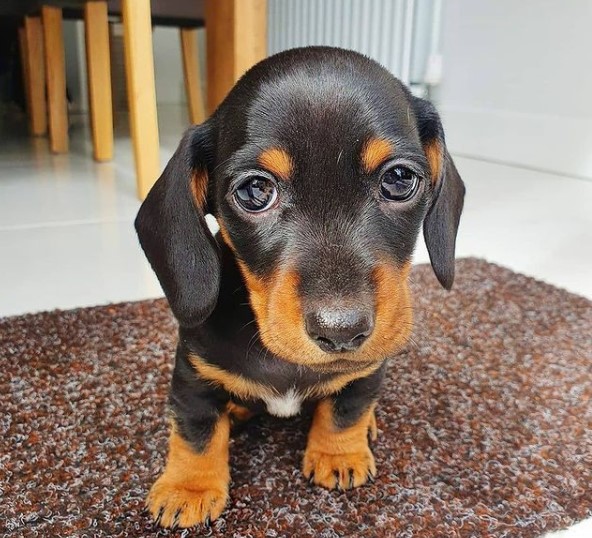 Most dogs of this breed have a similar anatomical structure: an elongated body and a very powerful, strong, and muscular front part of the body, well suited for digging holes in the ground. The ribcage is well defined, with noticeable depressions on both sides, elongated, the back is straight, the lumbar region is wide and rounded. The feet are short and strong, the forelegs are more prominently outward than the hind legs, which are directed forward. The head is set on a long, muscular, slightly arched neck, wedge-shaped. The shape of the skull is not very prominent; the hump of the nose is clearly visible on the muzzle. The eyes are dark, almond-shaped, of medium size with an expressive superciliary arch. The ears are pendant, long, close to the head. Compared by breed type, compared to wire-haired and short-haired Dachshunds, the long-haired Dachshund’s head is neater and the ears are longer and lower set. 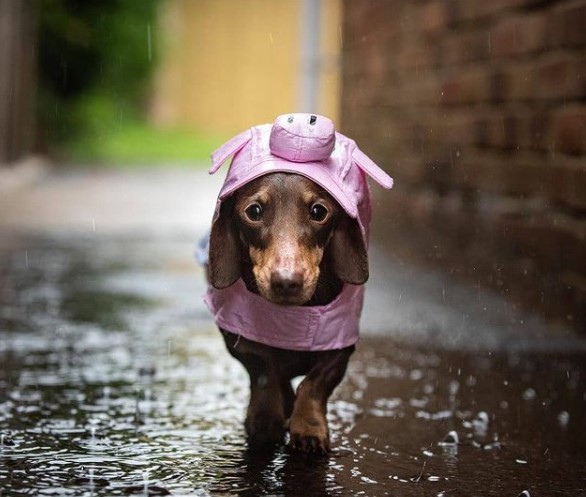 When images of short-legged dogs with a long torso were found in the tomb of the pharaoh (which is dated by historians as 4000 BC), connoisseurs of Dachshunds received confirmation that the origin of the breed goes back to ancient Egypt. In our time, it is difficult to say for sure whether, in fact, the images were the progenitor of Dachshund, or just a dog with short legs and a long body, which very much resembles it.

However, despite the studies of such distant times, the statement that the Dachshunds homeland is the vastness of today’s Germany is more convincing, because it is there that the first mentions of this breed appear. Already in the XIV century, there are such records: “dogs with short legs are much easier than others to penetrate the ground, and they are more suitable for hunting badgers.” These were dogs specially adapted for tracking badgers in burrows, hence their name: “Dachshund” – translated from German “Dachs” means badger, and “Hund” – dog. Representatives of the same breed, but of a smaller size, were taken to hunt rabbits and ermine.

The emergence of the Dachshund in the form in which it is familiar to us today was preceded by a large number of dog breeds: Bavarian Mountain Hound, Miniature Pinscher, and Terrier. The breed standard was first adopted in 1879 and since then Dachshunds have become more and more popular. In 1880 it was first included in the breed standard book, and in 1888 the first German dachshund club was founded. Soon, literally three years later, in 1891, the first club exhibition took place, at which about three hundred individuals of dachshunds were presented! Four years later, a compulsory division of the breed was introduced for the first time, taking into account its coat and body weight. This division has survived to this day.

These three breed varieties are presented in different weight categories: standard, miniature, and rabbit. They all have certain differences and are evaluated at exhibitions separately. Therefore, according to the MKF-148 standards, one sample of the breed was adopted with nine possible varieties, which may differ from each other in the type of coat and body weight. 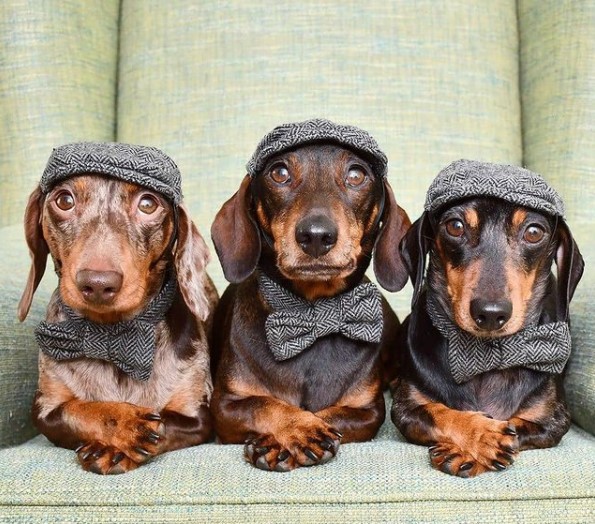 This dog breed is described as intelligent and brave. Its representatives never give up, this is where it will be appropriate to say that size does not matter.

Although all Dachshunds are brave and fearless, yet each species has its own personality. Wire-haired Dachshunds, for example, have a bit of a ridiculous quality. They can be spotted doing some pretty funny activity, such as grabbing one end of a roll of toilet paper and running around the house.

Many words can be used for Dachshund: stubbornness, curiosity, independence, activity, but the only word that is in no way associated with this breed is shyness. The dog happily goes to meet friends, while fighting enemies well, it is an excellent watchdog, and at the same time happily greets guests. 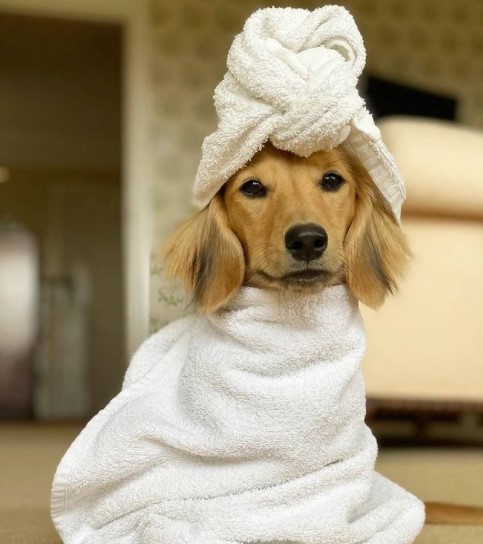 Any dog ​​needs to be bathed, Dachshund is no exception, although it does not often need baths. Bathing is considered normal once every six weeks. Naturally, if the dog is very dirty, then it is necessary to bathe it without waiting for a month and a half.

Remember to keep your ears clean. They must be cleaned with a special solution, which must be prescribed by a veterinarian. You should clean your ears carefully, when using cotton swabs, you do not need to push them deeply. Try to clean only the visible part of the ear.

And the last thing to do is trim the claws. This procedure is performed approximately once every two weeks. Never let your claws grow so long that you can hear them tapping as you walk! 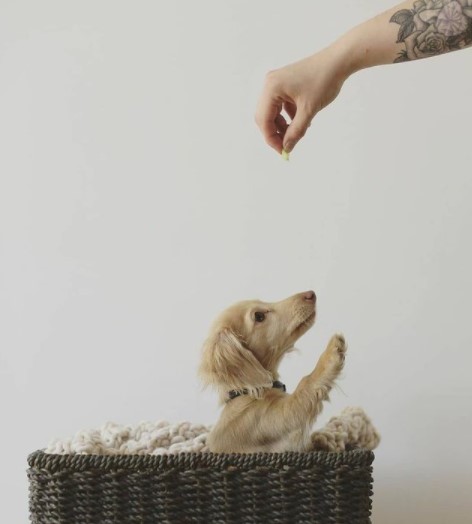 In matters of training and education, the special obedience of Dachshunds cannot be noted. It is quite difficult to train representatives of this breed, but nothing is impossible, because the main thing is to find good motivation for the dog. Food is a good motivation for Dachshund, but with a special mindset, Dachshund’s desire does not always coincide with the trainer’s desire. This is why learning requires a lot of patience, attention, and sometimes a sense of humor. 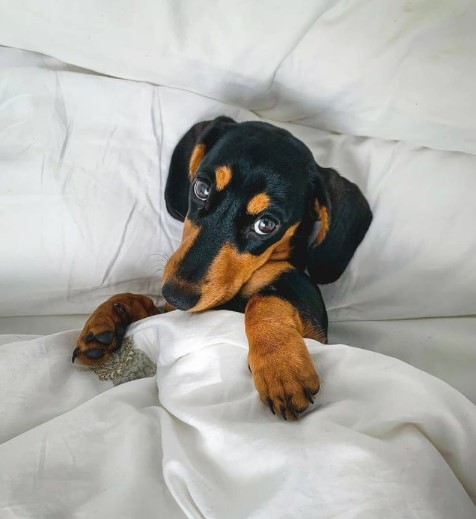 The most common diseases of this breed are related to the back. Dachshunds are prone to paralysis of the hind limbs like no other breed, and they are always at risk of being in dog wheelchairs.

The length of the spine and small stature, combined with the activity of the dog, can cause the occurrence of intervertebral hernias and their infringement. Sometimes, with injuries to the spine, the dog has trouble defecating. If your pet has difficulty walking, or if you find any indicators that indicate back pain, contact your veterinarian immediately! Often, timely surgery can prevent loss of normal limb function. It is quite difficult to engage in physical exercises with Dachshund, without giving a special load on the ridge. As already mentioned, from an early age it is advisable to arrange ramps in the apartment so that the dog does not jump on the sofa, but calmly walks on it.

Like many other breeds, Dachshunds are prone to problems associated with bloating. First of all, this can be caused by the excessive tendency of this breed to overeat. An absolutely healthy dog ​​can suddenly feel bad and even die. You should always carefully observe the behavior of your pet. At the first sign of bloating, you should go to your veterinarian immediately.

Epilepsy, skin, and eye diseases, even diabetes mellitus – all these diseases can affect the body of your beloved Dachshund. There are times when a dog stalls due to a hereditary factor. The researchers noticed that mainly those dachshunds that were born to parents with a spotted color are prone to deafness.

One way to obtain reliable information about possible genetic diseases in a dog is through so-called dog health registries. This is a great way to get information not only about your puppy’s health but also about the health of his parents. Dachshund health information may be included in the Dog Health Information Center database. For example, the Dachshund Club of America requires their owners to register their pet’s health status with the Eye Disease Registry and have a health certificate from an Orthopedic Center.

A fairly good way to identify problems with retinal atrophy and a tendency to deafness is to conduct a DNA test. You should not trust those breeders who insist that such a study is not necessary due to the fact that their dogs are absolutely healthy!

Most people who breed dogs make every effort to keep their pets healthy and beautiful. But Mother Nature is not always kind to everyone. Sometimes even the healthiest dogs get sick. When acquiring a little friend, ask the seller to provide information about the diseases of the puppy’s parents, and if they died, be sure to find out the cause of death.

It should be noted that after the Dachshund got into your house from one disease, you can definitely save your pet – from obesity. Maintaining a healthy weight and preventing spinal injuries will help your dog live a long and happy life. Remember, prevention is much easier than cure! 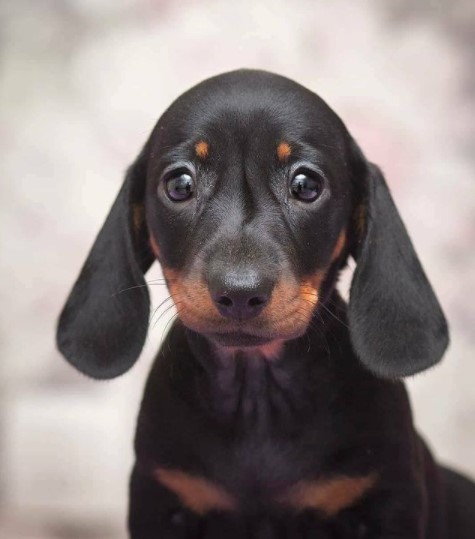