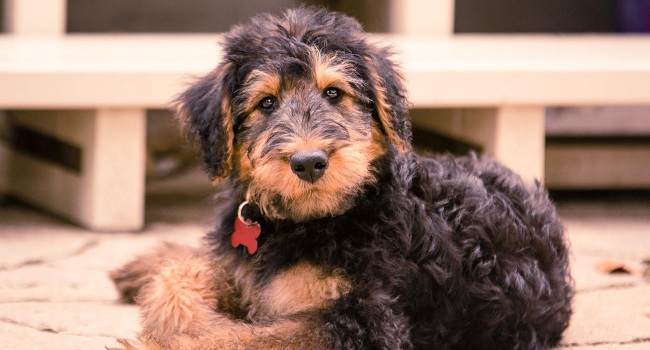 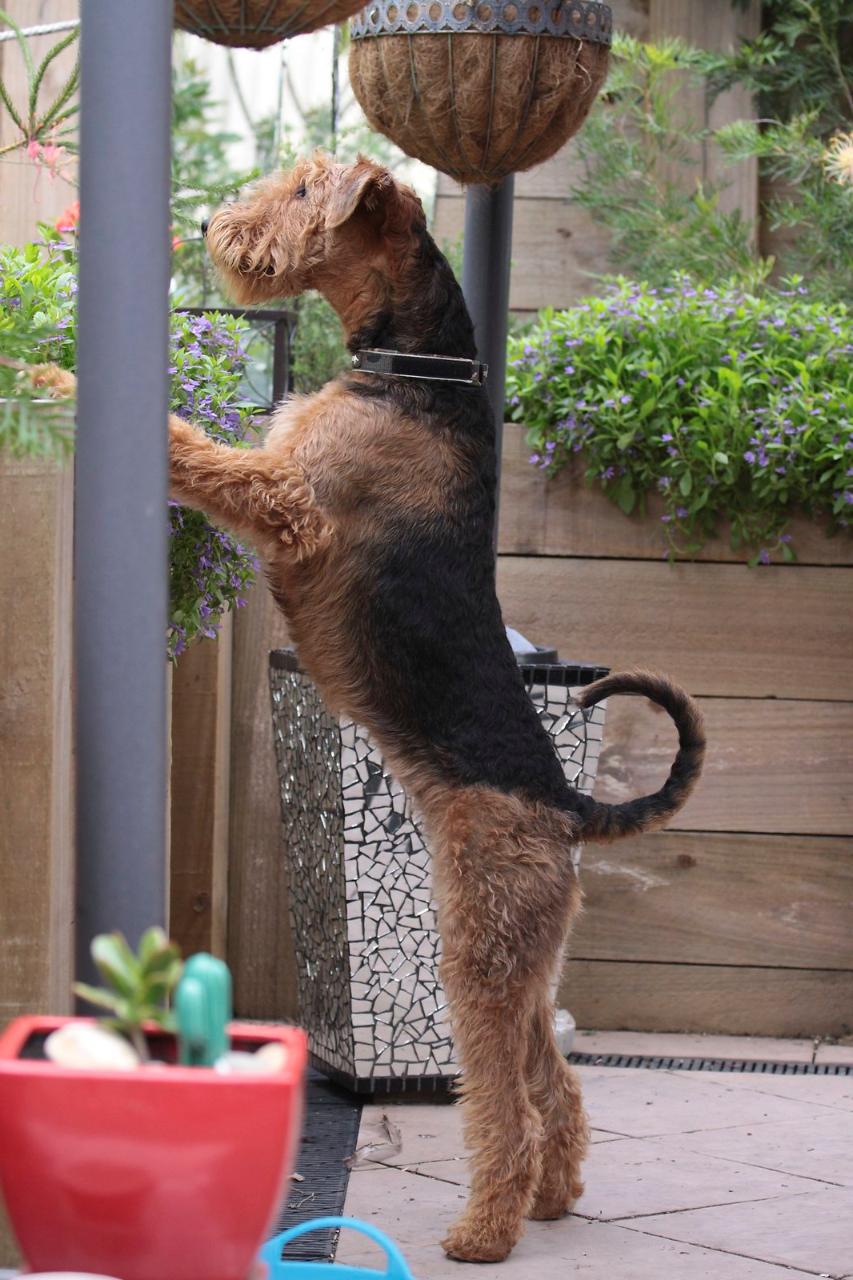 Airedale terriers are cheeky merry fellows, harmoniously combining such character traits as independence, gambling, and boundless devotion to the owner. With these bearded “Yorkshires”, both authoritarianism and excessive liberalism will not work. They are ready to recognize the authority of a person only if he respects their desires and at the same time does not allow himself to be manipulated. If the stars converge and in relations with animals you adhere to exactly this tactic of behavior, the airedale is 100% your pet. 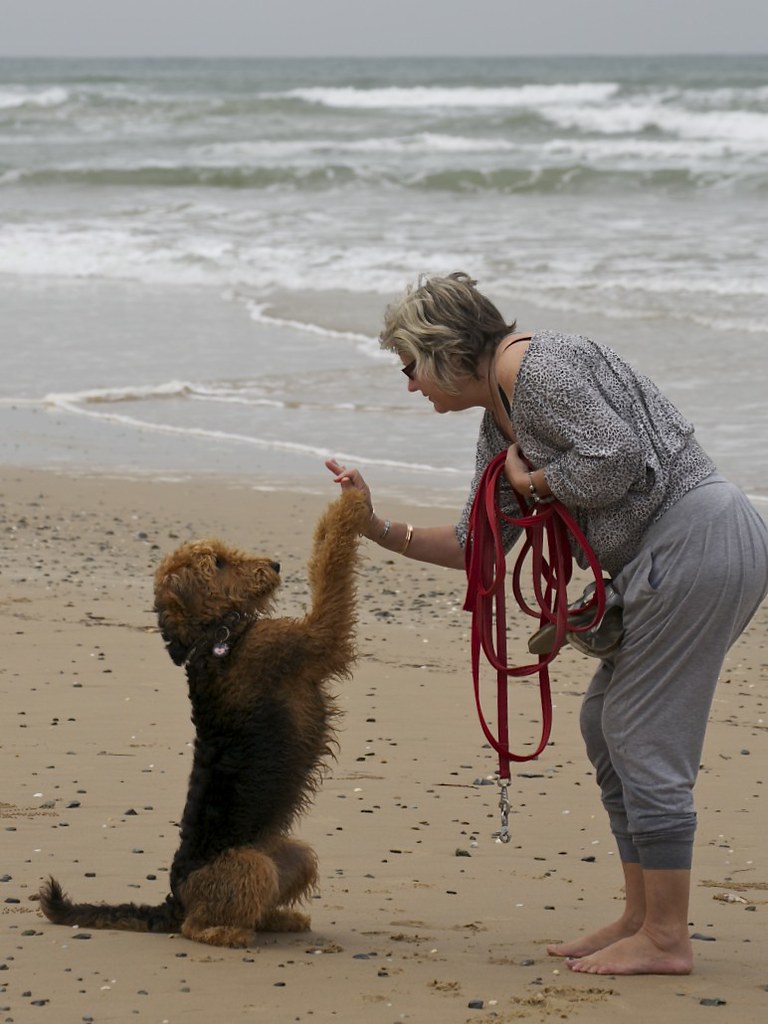 The largest of the British terriers was bred around the middle of the 19th century, in the Erdel Valley (western part of Yorkshire), which later gave the name to the breed. Carried away by such unpretentious entertainment as baiting river otters, English hard workers from time to time indulged in the crossing of certain varieties of terriers. In a similar way, the inhabitants, addicted to the cruel game, planned to bring out a strong, grasping dog, capable of breaking records for catching rodents. In the end, one of the experiments in which the red and Old English black and tan terriers took part bore fruit. This is how the first airedales were born. Initially, these four-legged “Yorkshire” did not have a separate name, so in different parts of the country, they were called aquatic, working, wire-haired and coastal terriers. It was only in 1886 that the animals were officially renamed the Airedale Terriers, approving them as an independent breed.
The gene pool of dogs gradually expanded. Cynologists are sure that at some stage they received the blood of the Irish wolfhound, the Basset Griffon Vendee, and the Otterhound, and that it was these breeds that gave the Airedale phenotype the necessary completeness and expressiveness. As for the working qualities, it almost immediately became clear: Airedale terriers are able to find animal holes, but not make their way into them. In this regard, in England, animals were used in classic gun hunting. Possessing a keen sense of smell, these bearded fidgets never lost track, and they were not distracted by the smell of gunpowder. They also worked professionally on the water.
Since the end of the 19th century, the breed began to smoothly expand its habitat. For example, in 1880, several individuals emigrated to the United States. 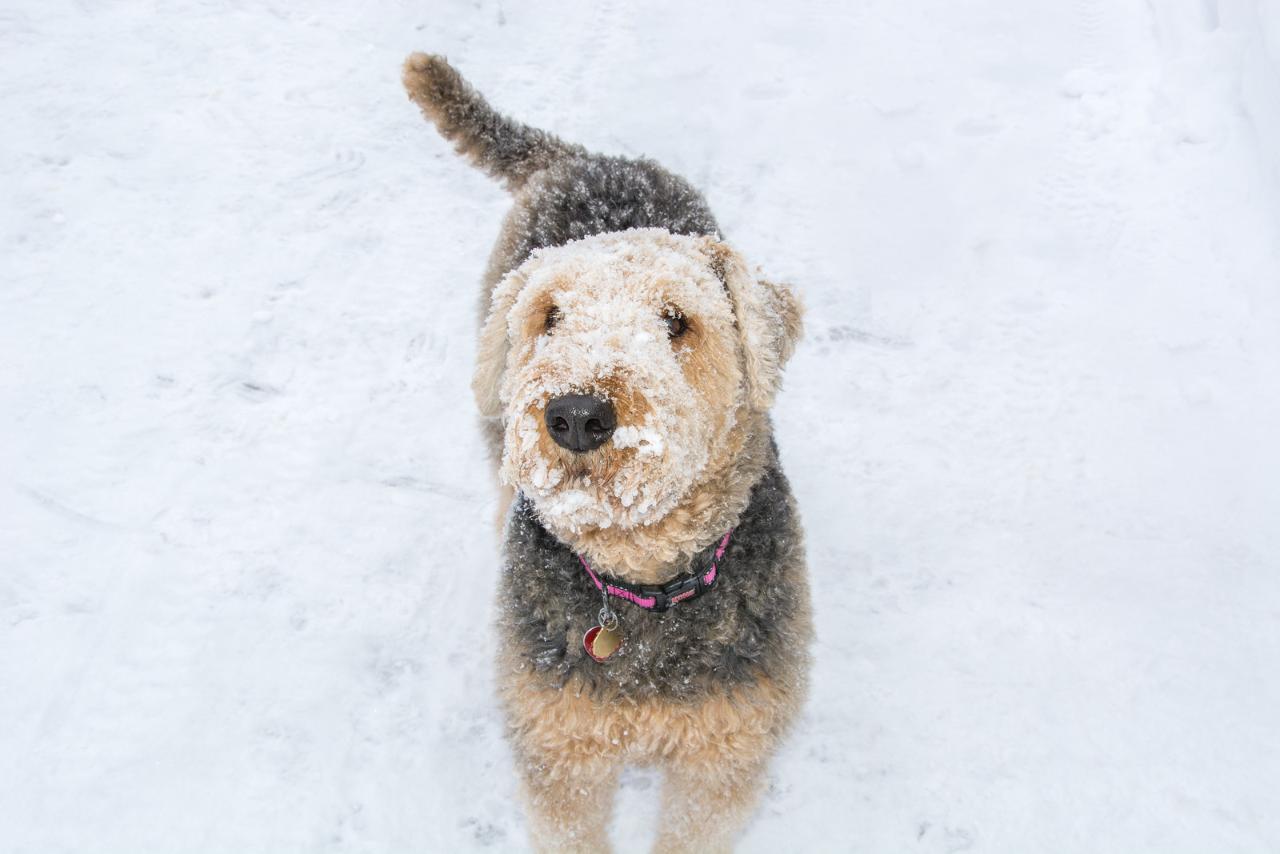 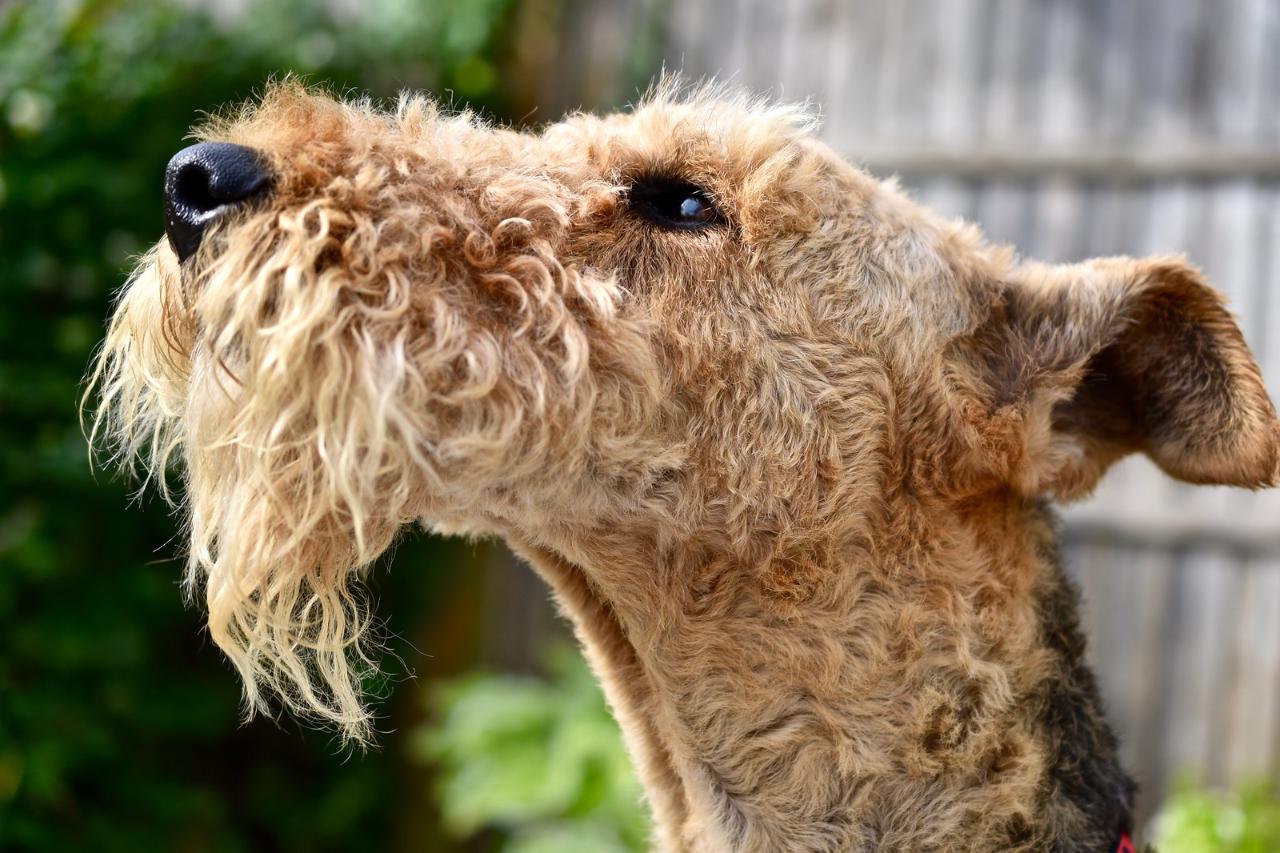 The Airedale is a harmoniously built, bearded liveliness with a curious, penetrating look and a tough, funny dog shaggy on its paws. In fact, the Airedale is not such a giant, although it is considered the largest of the British terriers. Nevertheless, tamping it into a backpack, like some Jack Russell, is unlikely to work.

The Airedale Terrier has a small head that flows into a voluminous but neat muzzle. The skull of the dog is flat, elongated, tapering towards the eyes. The stop is weak.

The massiveness of the muzzle of the Airedale is given by strong, deep jaws. At the same time, overdeveloped jawbones, which enhance the cheekiness of the muzzle, are not welcomed by exhibition commissions. The teeth of the representatives of this breed are strong, closed in a regular scissor bite.

Airedale Terriers have small, alert eyes: not too deeply set, but not protruding either. The darkest possible color of the iris is encouraged and light is very undesirable.

The ears of dogs are small, have the shape of an isosceles triangle, and fit well to the head. The fold of the ear canal should go above the skull line, while high-set or pointedly drooping ears are a serious drawback.

The neck of the Airedale Terrier is of medium length, good muscularity, and general dryness.

Housing. The Airedale is relatively compact. The dog’s topline is short, but flat, with an emphasized muscular loin. The chest is deep (reaching to the elbows), with prominent ribs, although not wide.

The legs of the Airedale Terriers are straight, moving freely, and in a straight line while running. The dog’s shoulder blades are long, strongly laid back, the elbows freely “walk” along the body. The hind legs provide springy propulsion through massive thighs, good angulation, and strong hocks. Paws are compact, rounded, with moderately arched toes and dense pads.

Until recently, the tail of the Airedale was docked. Today the procedure has been abolished, therefore the tail of modern individuals is strong, moderately thick, and long, raised upward.

Airedale Terriers have rather tough “clothes”. The undercoat of this breed is short but without pronounced puffiness. The awn has a rough, wire-like structure with a break. In general, the dog fits snugly to the body of the animal, forming something like a protective suit.

Typical color variations of the Airedale Terrier are reddish-brown with black or brownish-brown (so-called “grizzly”) saddlecloth. The shade of the coat on the outside of the tail and the upper part of the neck of the dog matches the color of the saddle-cloth. Areas with a darker color of the dog – ears, lower neck, lateral parts of the skull. A small amount of white hair on the chest is allowed. 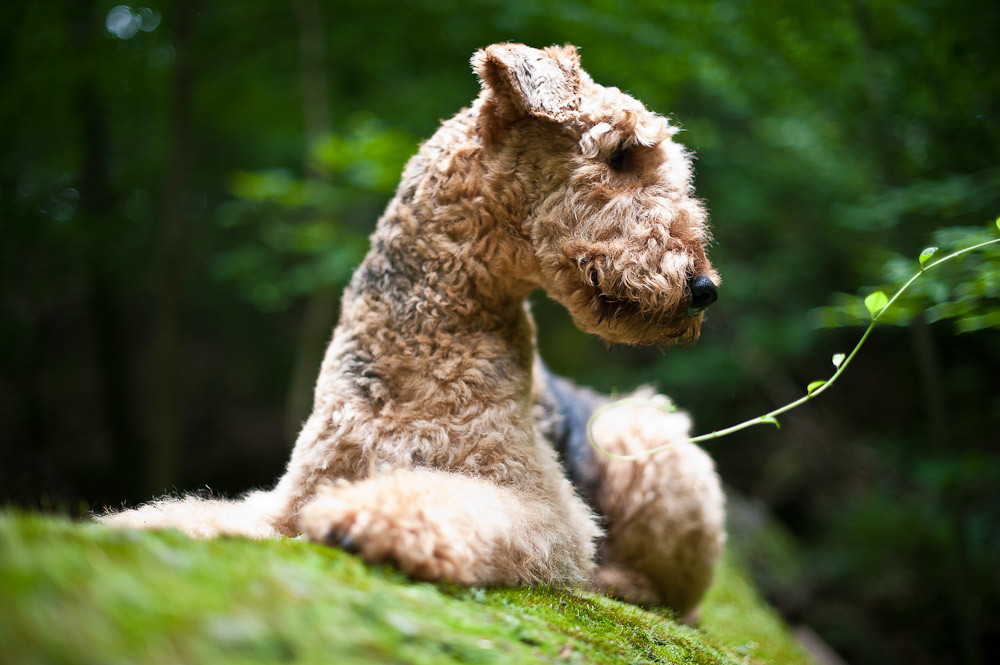 The Airedale is a positive, energetic prankster, which is difficult to push into the frame, but with whom it is quite possible to agree on peaceful coexistence. The pronounced independence of animals, inherited from the clan of terriers, can cause certain inconveniences to the owner, so opponents of any difficulties should prefer some spineless decorative creature to the representative of this breed. But you really won’t get bored with the airedale, so if you urgently need an active companion with your own views on life in general and friendship in particular, take a closer look at this bearded “meteor”.
Like its congeners in the group, the Airedale is distinguished by increased “talkativeness” and mischievousness. The silent and phlegmatic airedale is so out of the ordinary that it makes you think about the mental health of the dog. In the family, the animal behaves adequately, gets along with all household members, if they show due respect to him, and do not encroach on his property (yes, the Airedale does not like to share anything, and especially his own toys). This “Yorkshireman” has good fighting inclinations, but he is not at all a bully or a provocateur. The dog can rush into the attack only to protect the owner, but not for the sake of sports interest.
Airedale Terriers have a noticeable tendency to guard activity, so if you want to direct the pet’s “talkativeness” in the right direction, entrust him to guard the house, and you will be the first to know about the arrival of invited and uninvited guests. The increased sociability of the breed makes it difficult for it to calmly endure loneliness, therefore, taking an Airedale Terrier, knowing in advance that he will have to sit locked up for most of the day, is a frankly disastrous idea. In addition, a bored dog always trades in petty sabotage, and this is fraught with stripped furniture, ripped off wallpaper, and worn-out shoes. 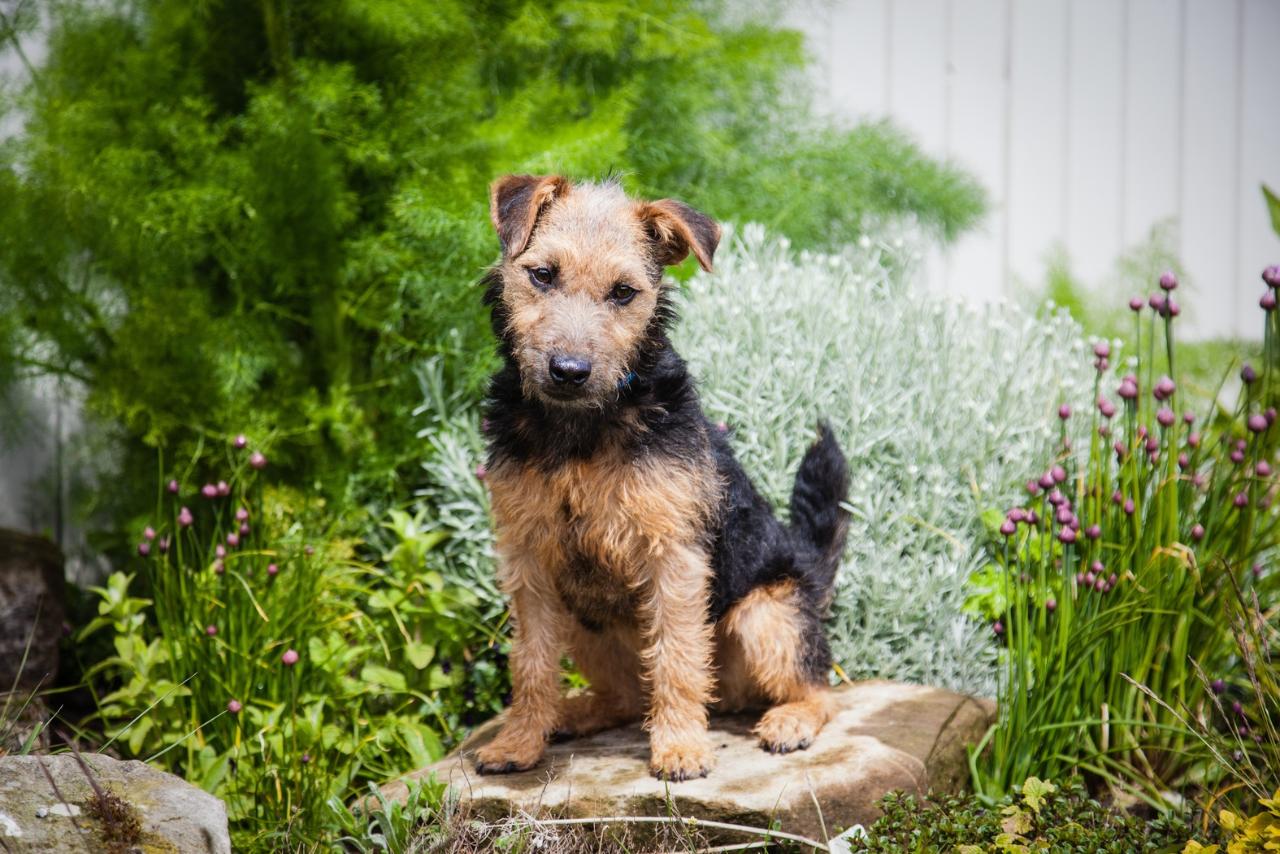 Like other breeds, Airedale Terriers are fed either “dry” or “natural”. The choice of the type of feeding is a matter of personal preferences of the owner, his employment, and financial capabilities. The natural menu of the Airedale does not include any special exotic products. Everything is like most dogs: raw lean meat every day; once a week, sea fish with previously removed bones; salads of beets, carrots, cabbage, cucumber, and pumpkin – every day, but in moderation. Cereal porridges (buckwheat, rice) help to increase the calorie intake of a portion. Airedale Terriers will not refuse sour milk and chicken eggs, but in the second case, it is better not to overdo it: once or twice a week is enough. The dog is fed twice a day, in the lick, focusing on the weight of the animal. So, the norm of one portion for a 20-kilogram individual can vary from 400 to 600 g, for a 29-kilogram – 600-900 g. If we talk about industrial feed, then here you will have to focus on varieties of at least premium class. On the other hand, when feeding the Airedale Terrier with high-quality “drying” there is a chance to save on the purchase of dietary supplements and vitamins, which cannot be avoided in the case of a natural diet. 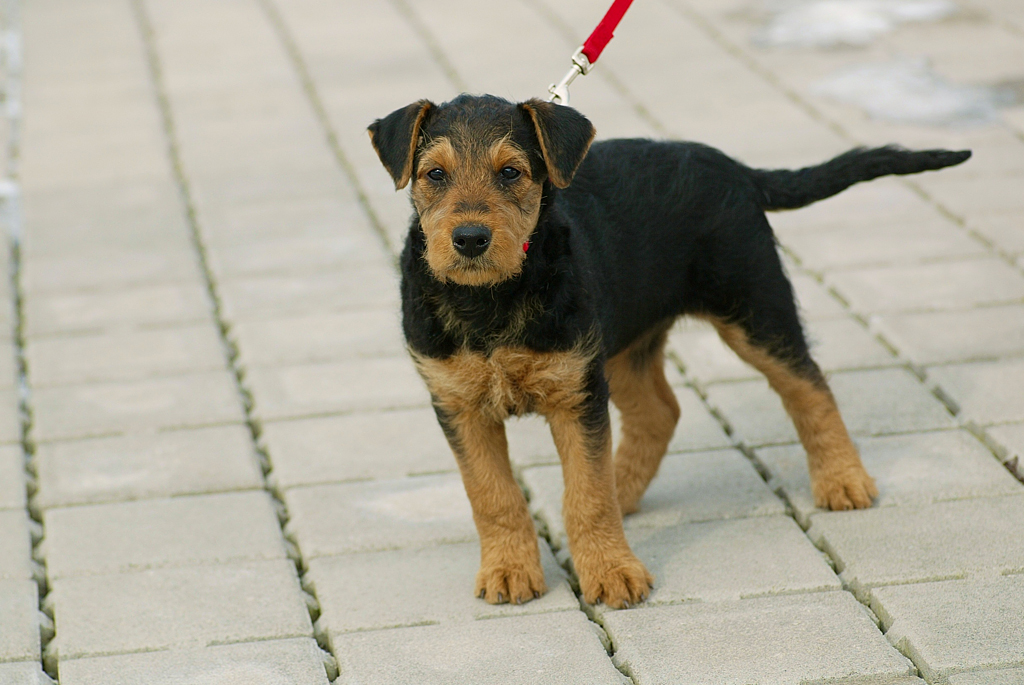 Even such energetic and hardy breeds as the Airedale are not immune to a genetic predisposition to certain types of diseases. In particular, the most “popular” ailment among Airedale is hip dysplasia. A little less often, animals are diagnosed with:

How to Choose a Puppy 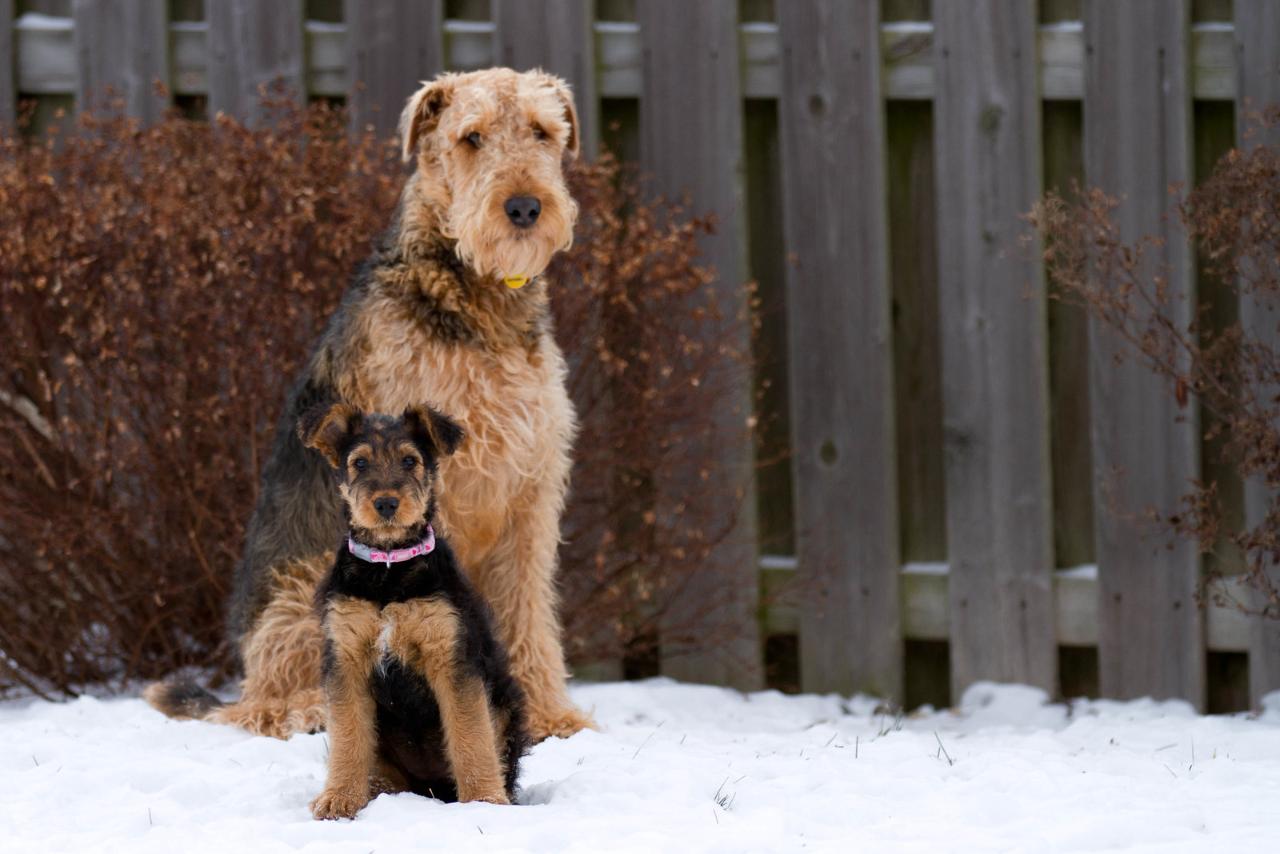