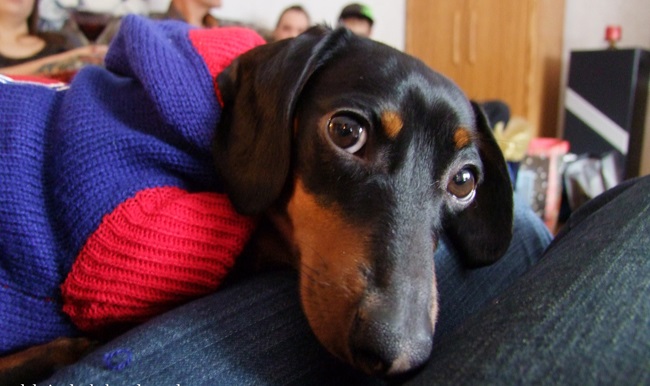 There is no psychiatrist in the world like a puppy licking your face.
—Ben Williams

I think dogs are the most amazing creatures; they give unconditional love. For me, they are the role model for being alive.
—Gilda Radner

Only my dogs will not betray me.
—Maria Callas

Dogs laugh, but they laugh with their tails.
—Max Eastman

When you feel lousy, puppy therapy is indicated.
—Sara Paretsky

Dogs are not our whole life, but they make our lives whole.
—Roger Caras

The more boys I meet, the more I love my dog.
—Carrie Underwood

One reason a dog can be such a comfort when you’re feeling blue is that he doesn’t try to find out why.
—Unknown

A dog is the only thing that can mend a crack in your broken heart.
—Judy Desmond

When a man’s best friend is his dog, that dog has a problem.
—Edward Abbey

Dogs act exactly the way we would act if we had no shame.
—Cynthia Heimel

The pug is living proof that God has a sense of humor.
—Margot Kaufman

The better I get to know men, the more I find myself loving dogs.
—Charles de Gaulle

If I have any beliefs about immortality, it is that certain dogs I have known will go to heaven, and very, very few persons.
—James Thurber

Heaven goes by favor. If it went by merit, you would stay out and your dog would go in.
—Mark Twain

If there are no dogs in Heaven, then when I die I want to go where they went.
—Will Rogers

You think dogs will not be in heaven? I tell you, they will be there long before any of us.
—Robert Louis Stevenson

Heaven’s the place where all the dogs you’ve ever loved come to greet you.
—Unknown

Dogs are our link to paradise. They don’t know evil or jealousy or discontent. To sit with a dog on a hillside on a glorious afternoon is to be back in Eden, where doing nothing was not boring—it was peace.
—Milan Kundera

Acquiring a dog may be the only time a person gets to choose a relative.
—Mordecai Siegal

There is nothing truer in this world than the love of a good dog.
—Mira Grant

Histories are more full of examples of the fidelity of dogs than of friends.
—Alexander Pope

You really have to be some kind of a creep for a dog to reject you.
—Joe Garagiola

The greatest pleasure of a dog is that you may make a fool of yourself with him and not only will he not scold you, but he will make a fool of himself too.
—Samuel Butler

Thorns may hurt you, men desert you, sunlight turn to fog;
but you’re never friendless ever, if you have a dog.
—Douglas Mallock

You call to a dog and a dog will break its neck to get to you. Dogs just want to please. Call to a cat and its attitude is, ‘What’s in it for me?’
—Lewis Grizzard

It is scarcely possible to doubt that the love of man has become instinctive in the dog.
—Charles Darwin

If your dog doesn’t like someone you probably shouldn’t, either.
—Unknown

The friendship of a dog is precious. It becomes even more so when one is so far removed from home….I have a Scottie. In him I find consolation and diversion…he is the one person to whom I can talk without the conversation coming back to war.
—Dwight D. Eisenhower

Any man who does not like dogs and want them about does not deserve to be in the White House.
—Calvin Coolidge

One of the happiest sights in the world comes when a lost dog is reunited with a master he loves. You just haven’t seen joy till you have seen that.
—Eldon Roark

The reason a dog has so many friends is that he wags his tail instead of his tongue.
—Unknown

Buy a pup and your money will buy love unflinching.
—Rudyard Kipling

The world would be a nicer place if everyone had the ability to love as unconditionally as a dog.
—M. K. Clinton

Blessed is the person who has earned the love of an old dog.
—Sidney Jeanne Seward

Even the tiniest poodle is lionhearted, ready to do anything to defend home, master, and mistress.
—Louis Sabin

The psychological and moral comfort of a presence at once humble and understanding—this is the greatest benefit that the dog has bestowed upon man.
—Percy Bysshe Shelley

Dogs really are perfect soldiers. They are brave and smart; they can smell through walls, see in the dark, and eat Army rations without complaint.
—Susan Orlean

There’s just something about dogs that makes you feel good. You come home, they’re thrilled to see you. They’re good for the ego.
—Janet Schnellman

Love is the emotion that a woman feels always for a poodle dog and sometimes for a man.
—George Jean Nathan

I don’t trust anybody in my life except my mother and my dogs.
—Cheryl Cole

No animal I know of can consistently be more of a friend and companion than a dog.
—Stanley Leinwoll

Dogs are the best example of a being who doesn’t need to lie to protect someone’s pride.
—Ammiel Josiah Monterde

Dogs are the only mammals that will actually stare and look into a human’s eyes.
—Jerry O’Connell

I’m not alone, said the boy. I’ve got a puppy.
—Jane Thayer

I wish all men were like dogs.
—Halle Berry

Dogs are often happier than men simply because the simplest things are the greatest things for them!
—Mehmet Murat Ildan

You can’t have a pristine house with ten dogs, and I’d rather have the ten dogs.
—Glenn Greenwald

Dogs lead a nice life. You never see a dog with a wristwatch.
—George Carlin

Sometimes I think I like dogs more than I like humans. The only time a dog has ever betrayed me…was by dying.
—José N. Harris

Dogs just need you and love, that’s all.
—Jennifer Westfeldt

I’ve seen a look in dogs’ eyes, a quickly vanishing look of amazed contempt, and I am convinced that basically dogs think humans are nuts.
—John Steinbeck

Investigators have discovered that dogs can laugh, which can’t be too big of a surprise.
—Tony Snow

The more I see of the depressing stature of people, the more I admire my dogs.
—Alphonse de Lamartine

Dogs are how people would be if the important stuff is all that mattered to us.
—Ashly Lorenzana

Dogs are mute and obedient, but they have watched us and know us and can smell how pitiful we are.
—Tove Jansson

A hound will die for you, but never lie to you.
—George R. R. Martin

A dog is the only thing on earth that loves you more than he loves himself.
—Josh Billings

The only creatures that are evolved enough to convey pure love are dogs and infants.
—Johnny Depp

The greatest fear dogs know is the fear that you will not come back when you go out the door without them.
—Stanley Coren

Hardly any animal can look as deeply disappointed as a dog to whom one says no.
—Jeffrey Moussaieff Masson

I love a dog. He does nothing for political reasons.
—Will Rogers

You can usually tell that a man is good if he has a dog who loves him.
—W. Bruce Cameron

Dogs are the leaders of the planet. If you see two life forms, one of them’s making a poop, the other one’s carrying it for him, who would you assume is in charge?
—Jerry Seinfeld

There is no faith which has never yet been broken, except that of a truly faithful dog.
—Konrad Lorenz

Dogs are the magicians of the universe.
—Clarissa Pinkola Estés

A dog doesn’t care if you’re rich or poor, smart or dumb. Give him your heart…and he’ll give you his.
—Milo Gathema

Many of the qualities that come so effortlessly to dogs—loyalty, devotion, selflessness, unflagging optimism, unqualified love—can be elusive to humans.
—John Grogan

Dogs’ lives are too short. Their only fault, really.
—Agnes Sligh Turnbull

A dog is grateful for what is, which I am finding to be the soundest kind of wisdom and very good theology.
—Carrie Newcomer

The more I see of men, the more I like dogs.
—Clara Bow

Dogs are better than human beings because they know but do not tell.
—Emily Dickinson

Dogs are actually very smart, it’s just that they’re rather clumsy, but it’s this trait that makes humans attracted to them and why I love dogs so much.
—Hiromu Arakawa

My dogs have been the reason I have woken up every single day of my life with a smile on my face.
—Jennifer Skiff

A well-trained dog is like religion, it sets the deserving at their ease and is a terror to evildoers.
—Elizabeth Goudge

The more I see of the representatives of the people, the more I admire my dogs.
—Alphonse de Lamartine

Everything I know, I learned from dogs.
—Nora Roberts

When an eighty-five pound mammal licks your tears away, then tries to sit on your lap, it’s hard to feel sad.
—Kristan Higgins

I have found that when you are deeply troubled, there are things you get from the silent devoted companionship of a dog that you can get from no other source.
—Doris Day

I always like a dog so long as he isn’t spelled backward.
—G. K. Chesterton

We are alone, absolutely alone on this chance planet; and amid all the forms of life that surround us, not one, excepting the dog has made an alliance with us.
—Max DePree

Dogs and philosophers do the greatest good and get the fewest rewards.
—Diogenes

DOG: A kind of additional or subsidiary Deity designed to catch the overflow or surplus of the world’s worship.
—Ambrose Bierce

Did you know that there are over three hundred words for love in canine?
—Gabrielle Zevin

I never met a man half so true as a dog. Treat a dog right, and he’ll treat you right. He’ll keep you company, be your friend, and never ask you no questions. Cats is different, but I never held that against ’em.
—Mary Ann Shaffer

If I could be half the person my dog is, I’d be twice the human I am.
—Charles Yu

A dog will teach you unconditional love. If you can have that in your life, things won’t be too bad.
—Robert Wagner

In my lap I had my dear little pug, the smell of whose ears will always be sweeter to me than all the perfumes of Araby and the scent of heliotrope combined.
—Kathryn Davis

If a dog will not come to you after having looked you in the face, you should go home and examine your conscience.
—Woodrow Wilson

Health issues of Goldendoodles? Here are the things you need to...