At some point the time has come for every dog owner: Our dogs will grow up. Especially for masters with bitches, a very special time begins with many hormonal processes and some interested male dogs can no longer hold back in the fertile phase. Heat begins in female dogs unless they are neutered early, in the first year of life. This process is entirely natural and can vary from bitch to bitch at fertile age.

From puppy to adult bitch: The puberty of dogs Most bitches can expect their first heat at the age of six to twelve months, in rare cases only after about two years. When dogs reach sexual maturity, they are at the same time in the middle of the developmental phase of their bodies and go through puberty. This mental and physical state can be compared to puberty in young people on their way to adulthood. All character traits that the dogs have acquired by then can initially be forgotten when they reach sexual maturity. The changes caused by puberty do not only differ according to race, the respective gender also makes the difference. While males change their character significantly, appear cheeky and pubescent, so to speak, bitches often feel vulnerable and insecure in their physical and mental condition and strength. In this phase, males question the leadership qualities of their humans and often dominate the household. For bitches, however, this phase of life is a time that requires a lot of understanding and attention from their owners.

Time of first heat according to dog breed

A bitch’s first heat is often an irritating experience for owners, despite the natural process. So that this uncertainty does not spread to the already young bitch, we explain all details of the heat of dogs here.

The exact age sensitivity of the first heat can vary depending on the dog breed and the individual.

A decisive factor that smooths and heralds the first heat is when the adult body weight has been reached. In growing dogs, attention should therefore be paid to balanced and, above all, sufficient food and feeding.

The first heat is usually not without problems and later hardly resembles the regular cycle of a bitch. For example, there is sometimes a so-called ‘silent heat’. Despite the typical hormonal changes, there are no physical signs of heat. The bitch behaves, controlled by hormones, like during a normal heat, but no physical or external characteristics such as discharge or spotting can be detected. It is not uncommon for the bitch to experience undiscovered ‘heat’. Mental difficulties or behavior disorders can thus be misinterpreted and misunderstood. Some bitches have a dysfunctional cycle. The heat is divided into different stages, which means that the “hot days” are constantly interrupted. The bitch goes into heat several times, in short intervals, one after the other. Unfortunately, a so-called “split cycle” can often represent a strong psychological burden for the animal concerned. Such anomalies in the first heat develop in young bitches because they are not yet fully physically developed. The incidence of irregular heat in bitches is very high, but small deviations from normal cycles are not a cause for concern. Bred dogs have changed in their original genetics over thousands of years, while physical characteristics have also adapted to their environment and posture.

The first stage of heat is called Proestrus (pre-oestrus). This phase lasts an average of nine days but can vary from three to seventeen days due to breed and size. The bitch is now going through various stages of physical change: the vulva swells and bloody vaginal discharge appears. The amount of body fluids excreted differs in dogs and varies from breed to breed and size. At this point, it is important to mention that the bitch is not yet fertile but already smells noticeably good for males. The bitch in heat is not yet impressed by the increased interest shown by the male dogs. On the contrary, she perceives strong attention as stressful and stressful and tries to help herself through aggressive counter-reactions. A meeting with extremely pushy males at this stage can also be dangerous for dogs.

In the second phase, also called oestrus (oestrus), the bitch is now ready to mate. The so-called “standing heat” also describes the now willing pairing. The bitch no longer bites off males, she plays with the males who are inclined to her and is extremely interested in the opposite sex. A stressful time now begins for owners who do not want their dogs to have offspring. Every male that is of interest to the bitch now receives full attention, so walks can become a gauntlet. The uncastrated bitch keeps standing, runs away, and acts improperly. On average, the standing heat lasts about nine days, but some females even manage to stay in oestrus far beyond that, up to 21 days. The vulva is no longer quite as swollen and the discharge from the vagina becomes more watery, usually slimy. During this phase of oestrus, several ovulations take place every few days. Especially in the first days, usually between the second and the fourth day, the bitch is in the fertile time. In order to safely avoid sexual intercourse, owners with a bitch in heat should be particularly careful when dealing with other, male dogs. Dog parks and exercise areas can be avoided in the first few days, the stress of the ‘hot’ bitch subsides faster and uncastrated males are not exposed to the smell unnecessarily.

The after-oestrus, also metestrus, describes the penultimate phase of heat. The hormonal changes slowly subside. The vulva swells, the discharge changes color turns yellow, and disappears. From this point on, the bitch is officially and biologically no longer in heat, but due to hormonal factors, she may still show symptoms of heat for a few weeks. Since the process of heat in dogs does not follow a monthly cycle as in humans, but only occurs several times a year, the hormonal changes can take some time to completely break down again. The corpuscles formed during ovulation and continuously produced the hormone progesterone. Progesterone is used by the embryo to grow and implant successfully in the uterus. The yellow corpuscles produce the hormone in the cycle phase, however, independently of possible fertilization, which means that the breakdown must be broken down more slowly if the bitch is not successfully pregnant. The complete breakdown can therefore take up to twelve weeks. In some cases, periods of heat without successful fertilization can also have serious consequences: in some bitches, who tend to have a severe and slow breakdown of cycle hormones, the falling progesterone level can trigger the release of pregnancy symptoms. This leads to the release of the hormone prolactin, which is responsible for the bitch’s milk production, which means that the bitch is now exposed to what is known as pseudo-pregnancy. Cases of pseudopregnancy in bitches are not only due to hormonal reasons. In the further course of the article, we refer again in detail to the reasons and effects.

The last phase of the cycle is called anestrus. The so-called resting phase of heat describes a complete cessation of the external signs, but sex hormones are still produced in large quantities. This phase is therefore not only described as the last section of the heat, but it also introduces a new “hot phase”. Hormones such as progesterone and estrogen fluctuate. In the transition between the phases from anestrus to proestrus, a new heat is already being prepared physically, i.e. hormonally. Here, follicles, follicles, form on the ovaries. The egg cells can mature in the follicles until they ovulate.

Bitches in heat: What dog owners should consider 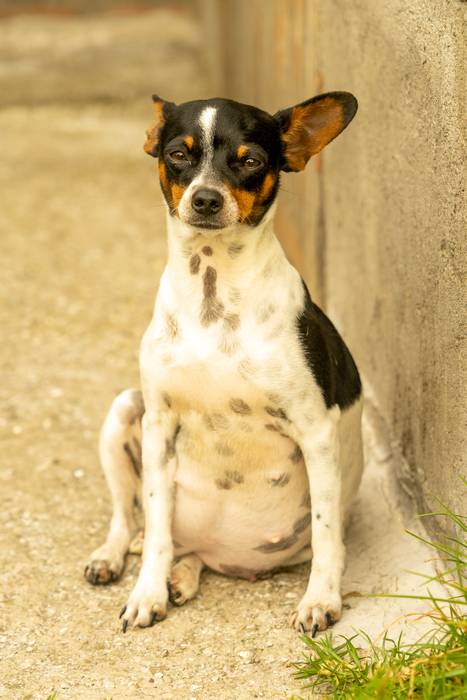 The first heat is a special time for every dog ​​owner that requires a lot of understanding and calm. In these moments, many bitches sometimes even forget their good upbringing and appear drive-controlled instead of responsive. Other females even become more affectionate and turn more to their owners. It is important to understand that these phases are hormone-controlled and bitches are exposed to a great stress factor, sometimes even prone to depression or melancholy behavior. The process of heat is a natural course of life. Dogs instinctively understand what to do. They clean away secretions of heat themselves and naturally pay attention to cleanliness. If a bitch has lost this instinctive character or has not developed it enough, owners can help with special “panties” for bitches in heat. Even in the encounter with interested and potential candidates, so much can be prevented and the bitch can be less stressed. 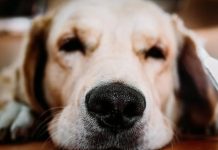 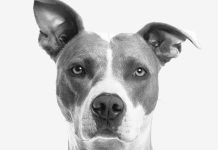 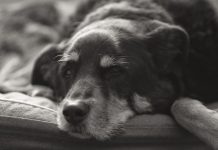