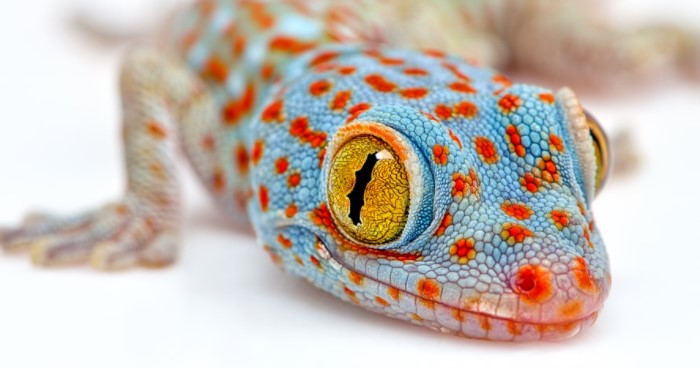 In the folklore of some peoples, Tokay Gecko settling in a new house is a guarantee of happiness and well-being. And his cry is peculiar – a good omen, especially if he is heard on the day the baby is born. A cuckoo from Southeast Asia – so affectionately named Tokay Gecko. Unlike many other reptiles, this lizard is naturally endowed with a real voice. And even the specific name of the reptile is rooted in its characteristic sounds “tokay”. On their basis, a kind of game has even developed among the population of Southeast Asia – in it, bets are made on the number of shouts that Tokay Gecko will reproduce at one time or another.

Tokay Geckos, like most geckos, are nocturnal lizards. Their males are much larger and females, their size is 30-35 cm, and are also brighter colored. The back of reptiles is gray, bluish, olive, or dark green with terracotta and white blotches, turning into stripes on the tail. Large eyes without moving eyelids with a vertical pupil expanding in the dark are responsible for the vision adapted to the nocturnal lifestyle. The body of Tokay Gecko is quite dense, slightly flattened, the head is large, the legs are short, and the tail is of medium length. The ability of these lizards to move even on vertical surfaces is provided by scales on the lower part of the toes. On the scales are microscopic brushes made of tiny hairs, which scientists were able to see using a 35,000-fold magnification under a microscope. There are over 200 million of these brushes on one Tokay Gecko finger. Due to their small size, their hooked hairs can cover any irregularities even on a surface that seems absolutely smooth to people. One gets the impression that there are suckers on the geckos’ fingers. Nevertheless, people have not yet been able to fully understand this mechanism. 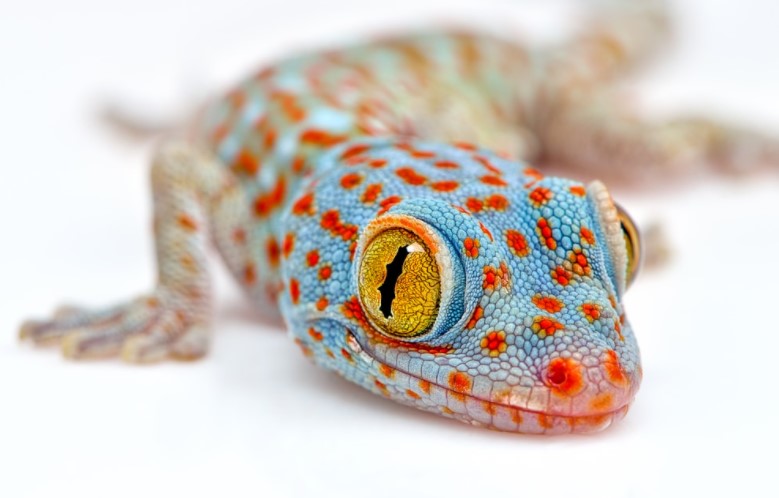 Not so long ago, the scientific world started talking about the possibility of isolating two subspecies of Tokay. One of them is the above-described typical gecko that lives throughout the range. And the other is found in southern China and northern Vietnam. It is a larger reptile, colored dark gray with slightly more muted orange spots. The back of a gecko can be dazzled with both white blotches and black spots, especially contrasting in males. The eyes of these lizards are dark brown, while those of the typical subspecies are light. And most importantly, representatives of the second possible subspecies of geckos do not make any sounds, unlike typical Tokay.

Tokay Geckos live in Southeast Asia, in tropical rainforests, including mountainous ones, on rocky low mountains, as well as near people. But if Asia is the original place of residence of Tokay Gecko, then in some other countries the gecko was introduced. For example, today Tokay Gecko can be found in the southern United States, in states such as Florida. Without avoiding human proximity, these lizards live in various residential buildings – outside cities in palm huts and even in urban stone skyscrapers. You can sometimes see Tokay Gecko on the wall in the living room, where lizards hunt various insects, for example, cockroaches. But these geckos always live alone. 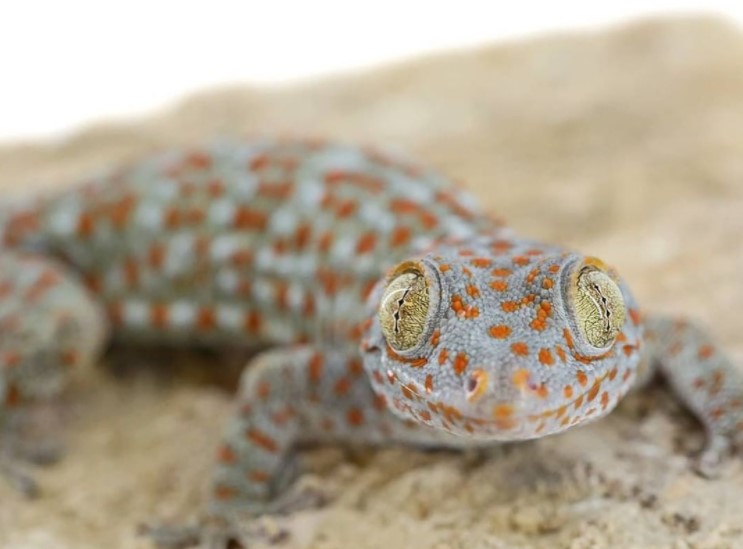 Tokay Geckos give the deceptive impression of clumsy and slow reptiles. In fact, these lizards are surprisingly dexterous in moving around any object – trees, rocks, walls of houses, and even absolutely smooth glass surfaces. Tokay Geckos are crepuscular or nocturnal, alternating with daytime reptiles at sunset. In the evenings, geckos hunt various insects attracted by electric light and, because of this, are valued by people as useful creatures. Tokay Geckos are even specially launched into new homes. However, the nature of these lizards is far from the most friendly. They are quite aggressive towards their relatives and do not let strangers into their territory, claiming the right to it with loud cries. And these geckos are capable of screaming for a long time, almost all night, but if something frightens them, then the screams immediately stop. By these sounds of geckos, hunters find, catching lizards for food. Themselves Tokay Geckos during the hunt never go far from their homes. And their females are silent, so they become prey much less often. However, catching a gecko is not easy. The Tokay Geckos have strong jaws that are almost impossible to unclench without damage. There are known cases when a snake attacking Tokay in response was tightly gripped by the jaws of a gecko, and this confrontation lasted more than 4 hours.

So Tokay is quite capable of grabbing onto any object and even hanging on it, holding only with his jaws. However, you can still catch a gecko. To do this, it is enough to sprinkle the surface on which Tokay is running with water – from the moisture, the lizard’s paws lose their tenacity. Once in the hands, the gecko swells with a hiss and opens its mouth wide, trying to attack the enemy. This lizard does not at all look like an affectionate and cute creature, and if he does not like something, then the gecko is able to bite painfully.

To maintain Tokay Geckos, a sufficiently spacious enclosure measuring 80 x 50 x 80 centimeters in length, width and height are required. Despite Tokay Gecko’s ability to walk on vertical glass, it is recommended to decorate the back wall with pieces and layers of bark. It is advisable to plant greenery in the terrarium: various philodendrons, white-veined arrowroot, and dwarf creeping ficus make the interior beautiful and maintain the high air humidity.

Plant pots are buried in a layer of fine gravel or high moor peat. Tokay Geckos practically do not damage green spaces. A green terrarium should be brightly lit. You can do without vegetation, then a low-power incandescent lamp (preferably blue), closed with a cap on top, is enough. The lamp is suspended in one of the corners of the terrarium for local heating. The temperature is maintained with a thermostat: during the day in different parts of the terrarium, it ranges from 25 to 32 ° C, at night it is 22-24 ° C. The optimum air humidity is 70-80 percent. The terrarium follows daily (morning and evening
rum) spray with warm (40-50 ° C) water, avoiding waterlogging of the soil. Slots in the ceiling and in one of the end walls, tightened with a fine mesh, ensure good ventilation.

To ensure that Tokay Geckos have a suitable diet, herpetologists recommend that food breed their food on their own. These can be mealworms, various cockroaches, and crickets. In specialized nurseries, Tokay Geckos are fed with quail eggs and newborn rodents. Here are some tips on how to make the diet more nutritious. As for mealworms, they cannot be considered a particularly high-calorie food, and the hard chitinous integuments of these larvae impede digestion and can lead to inflammation of the stomachs of lizards. Therefore, before feeding, it is recommended to hold them on the nutritious feed so that they gain weight. And in no case should you store mealworms in damp rooms; containers with bran or oatmeal are better suited for this. 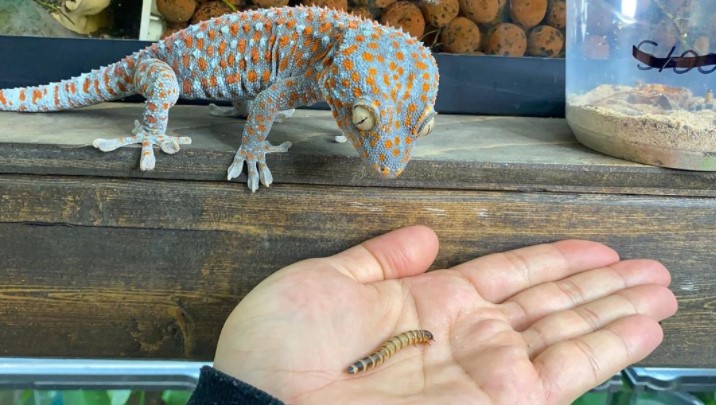 A more suitable treat for Tokay is crickets. These insects are somewhat milder and better absorbed. True, they are capable of singing quite loudly, so it is better to place the crickets in a place where their singing will not annoy others. Tokay Geckos owners most commonly breed crickets and spotted crickets following specific conditions described in the relevant insect breeding literature.

Finally, another type of Tokay food is tropical marble cockroaches. Don’t be intimidated by the fact that these insects are hard to come by. They can be replaced with the most common red Prussians. They, like crickets, are bred according to certain conditions of detention and kept in a special aquarium. So taking care of the power supply of Tokay turns out to be quite troublesome. In nature, everything is much simpler. There, the gecko chooses suitable insects by itself, and also catches small lizards, frogs, and even ravages bird nests with small eggs. This lizard does not specifically drink water – it collects moisture by licking the dew from the plants, so it is not necessary to put a drinker in the terrarium, it is enough to periodically spray it, creating an imitation of dew for the gecko.

It will not be a surprise to anyone that Tokay Geckos are oviparous. This feature is common to most lizards. In order to make a clutch, the female of the Tokay Geckos needs shelter. In nature, this most often turns out to be a hollow or a gap in some structure. In the terrarium, special shelters made of pieces of bark are adapted for the female. 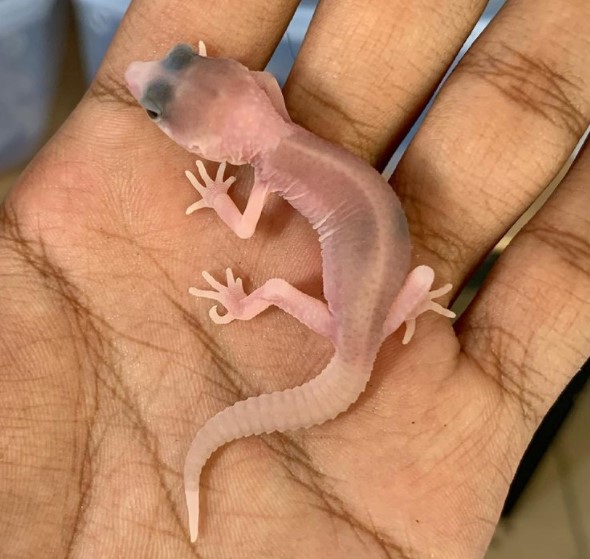 Tokay Geckos are extremely fertile, but this fertility is not expressed in the number of eggs, but in the year-round mating. During the year, except for the winter months, the female gecko is able to make 4-5 clutches with an interval of one and a half months. In a clutch, there are 1-2 eggs. Tokay Gecko eggs are glued to the nest walls in a special way, and it is almost impossible to peel them off without damaging them. The incubation period takes place at a temperature of 28-30 degrees and takes about 5 and a half months. The female who has laid eggs should be fed especially carefully, adding various calcified additives to her diet. And when the cubs hatch, the mother will eat the eggshells, which are also rich in calcium. Tokay Geckos of newborns are not more than a centimeter. Small geckos are brightly colored and move their striped tail very quickly – this scares off predators. However, parents are able to eat their offspring if the terrarium seems too cramped for the whole family. For example, there were cases when the male-producer from the emerging litter ate only males, thus eliminating possible competition. Of course, cannibalism in the family does not always happen, but nevertheless, it is recommended that young animals be removed from adult geckos. Females do clutch mostly at night. Sometimes she is placed in an incubator, and sometimes she is left in a terrarium. There are also common clutches of several females in one nest. At the same time, the mother gecko never strays far from the nest, although it cannot be said that she is characterized by conscious care for the offspring.