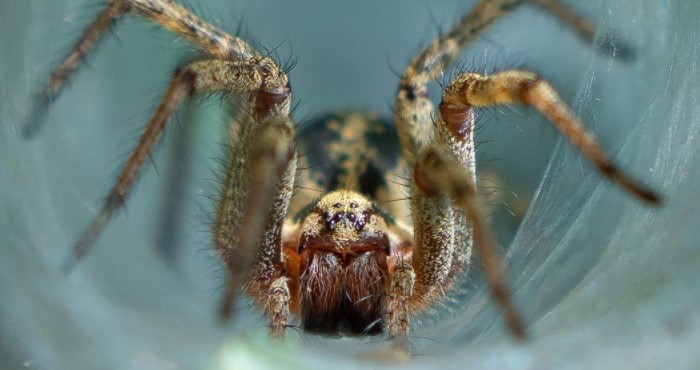 The Labyrinth Spider (Agelena labyrinthica) belongs to the funnel spider family, class arachnids. The spider received its specific name for a kind of intermittent way of movement: it suddenly stops, then freezes, and again moves intermittently. The definition of the funnel is related to the shape of a woven spider web, which looks like a funnel. 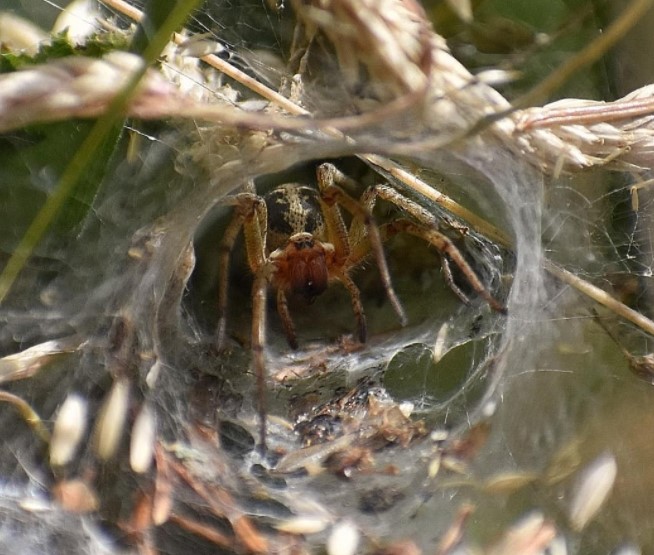 The Labyrinth Spider is conspicuous, both the spider itself and its spider webs. It is large, the body length is from 0.8 cm to 1.4 cm. The body is densely pubescent, with long legs. On the abdomen, like a tail, two posterior arachnoid warts, thin and long, stand out. At rest, they are tightly pressed against each other by their tips.

The color of the cephalothorax is sandy with dark brown spots; the number and shape of spots vary from individual to individual. On the abdomen, there are light lines located obliquely, they are either noticeable or coincide with the main color. The female has two noticeable longitudinal stripes on the cephalothorax. The limbs are brown, darker at the joints, they are equipped with powerful spines. There are three comb claws on the tips of the feet. The eyes form two transverse rows.

The Labyrinth Spider constructs a funnel-shaped spider web in an open space and stretches it among herbaceous plants and low bushes. The construction of the spider web lasts two days. Then the spider strengthens the funnel by adding new webs to it. The spider weaves a trapping net at dusk and early morning, sometimes even at night.

Cobweb funnels hang on rigid stems that support a half-meter net. In the center of the web is a curved tube with holes on both sides – this is the home of the spider. The “main entrance” is turned towards the spider web, and the spare serves as an exit for the owner in times of danger. The beginning of the living tube gradually expands and ends with a dense horizontal canopy, which is reinforced with vertical threads. 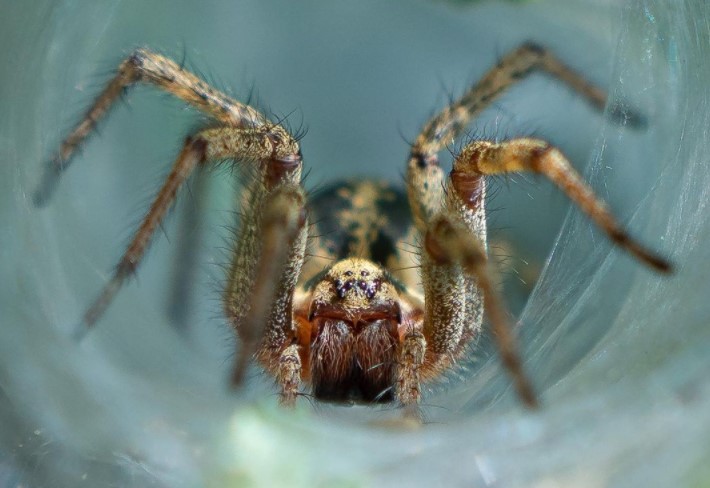 The spider waits for prey, sitting in the depth of the tube or on its edge, and the caught insect drags inside the shelter. Then Labyrinth Spider watches over the next victim after 1-2 minutes attacks the third one. When the prey is caught and immobilized, the spider eats insects in the same sequence in which the insects fell into the trap. In the cold season, Labyrinth Spider becomes inactive and does not hunt. Sits on a cobweb and drinks water droplets.

The web consists of threads that do not have adhesive properties. Therefore, the vibrations of the web as a signal for the spider that the prey has been caught, and it moves unhindered along the threads, attacking the victim. The Labyrinth Spider moves in its normal position, not upside down. The spider is oriented towards the light and becomes especially active in sunny weather.

The Labyrinth Spider is a polyphage that feeds on arthropods. In addition to insects with a soft chitinous cover (mosquitoes, flies, small spiders, and cicadas), potentially dangerous insects, such as large orthopterans, beetles, bees, and ants, are often found in a spider’s net in significant numbers. The Labyrinth Spider is a predator and in large beetles, it bites through the soft connecting membrane between the abdominal sternites. Eats prey in the nest, makes one or more bites if a large prey is caught. Sometimes the spider leaves the caught prey for 2-4 minutes but does not move far from it. The rate of food absorption ranges from 49 to 125 minutes and averages 110 minutes.

The spider takes the rest of the meal to the edge of the funnel or completely throws it out of the nest. If necessary, the spider even cuts the nest wall with chelicerae and uses the new “door” to enter and exit several times. Having destroyed the prey, the spider tidies up the chelicerae, removes food debris from them for several minutes. If the victim is caught small, then the chelicera cleaning is not observed. When more than one fly enters the net, the spider chooses an insect for the attack, which shakes the web more strongly than others and pierces. After a while, leaves the first fly and bites the second victim. 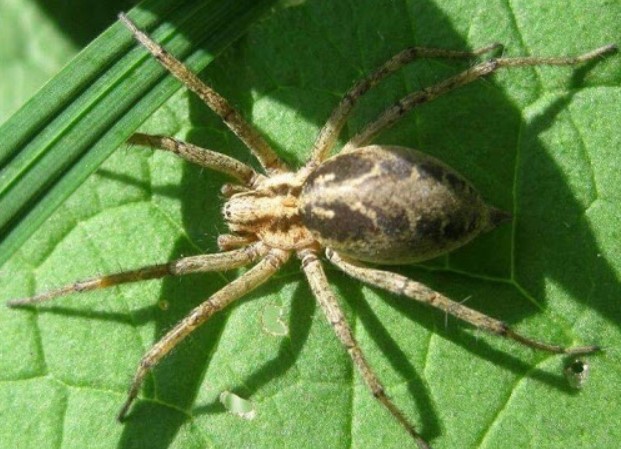 The Labyrinth Spider breeds from mid-June to autumn. Adult females lay eggs in cocoons from July to September. The courtship and mating ritual is simple. The male appears in the female’s net and taps on the web, the female falls into a trance state, then the male transfers the sluggish female to a secluded place and mates. A couple of spiders live on the same web for some time. The female lays her eggs in a flat cocoon of the web and hides them in her shelter. Sometimes weaves a separate pipe for him.

Labyrinth Spider numbers are now decreasing even with minor climatic changes. Any anthropogenic impact on meadow ecosystems is especially dangerous for this species: plowing of land, pollution with waste, oil spills. In extreme conditions, the survival rate of spiders is extremely low.

Labyrinth Spiders weave a web that sometimes bothers us even in the house. The appearance and extraordinary agility of spiders make us shudder at the mere mention of them. But all these insignificant shortcomings are covered by their undoubted merit. All spiders are predators. They destroy a huge number of insects, including annoying midges, flies, and mosquitoes. The spider venom is too weak to harm humans. A Labyrinth Spider sits in a dark corner of our home, and she catches ants and flies in her nets and does nothing wrong. But such cases are rare, they usually do not enter people’s homes.