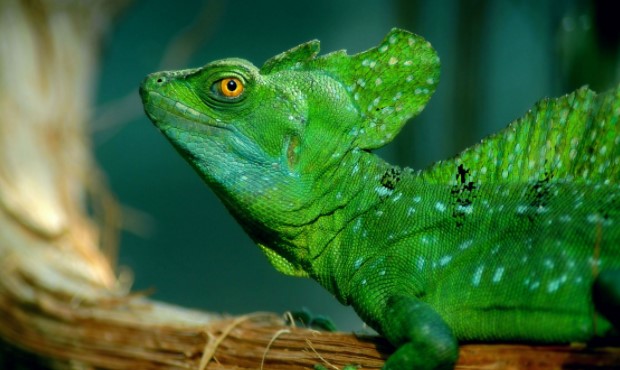 The Basilisk Lizard cannot be confused with anyone because of its ability to move and run in water in a funny way. Basilisk (Greek “little king”) is called because of the resemblance to a monster that resembles a rooster, a snake, and a lion, which can turn a person to stone with a gaze (Greek mythology).

These lizards can run in water on their hind legs for 1.5 to 4.5 meters before settling on all fours for swimming. This type of reptile has recently become a popular pet.

History of the Name

The Basilisk lizard got its name because of its resemblance to the mythical creature Basilisk, which is mentioned in the Latin version of the Bible. The legend about this terrible creature with a rooster’s head, snake tail, and the body of a toad was especially widespread in the Middle Ages. “Basilisk” is translated as “king”. Such a comparison appeared due to the fact that his head is crowned with a tuft that looks like a crown. The mythical Basilisk was credited with the ability to kill a victim with just one glance, he also had poisonous breath, fangs, and claws. But the Basilisk lizard, which we will talk about, is completely harmless and has a peaceful disposition. She herself has many more enemies among the fauna than animals that she can harm.

The Basilisk belongs to the Iguana family. The lizard grows to about 80 cm in length, including the tail, accounting for 70 to 75% of the total body length. The animal weighs less than 2 grams at hatching, and the adult weighs more than 500 grams. Females and males are brown to olive in color with a white, cream, or yellow stripe on the upper lip and small stripes on the sides of the body. They are more contrasting in young individuals and disappear as the Basilisk matures.

The lizard has long limbs with thumbs and sharp claws. The belly is usually yellow, the mouth is large, and has many sawtooth teeth located on the inner sides of the jaw. On the ground, the lizard is capable of speeds up to 11 km / h. Even though these strange animals are best known for their ability to run on water, they are also great climbers, swimmers, and even divers! Adults can stay underwater for up to half an hour! 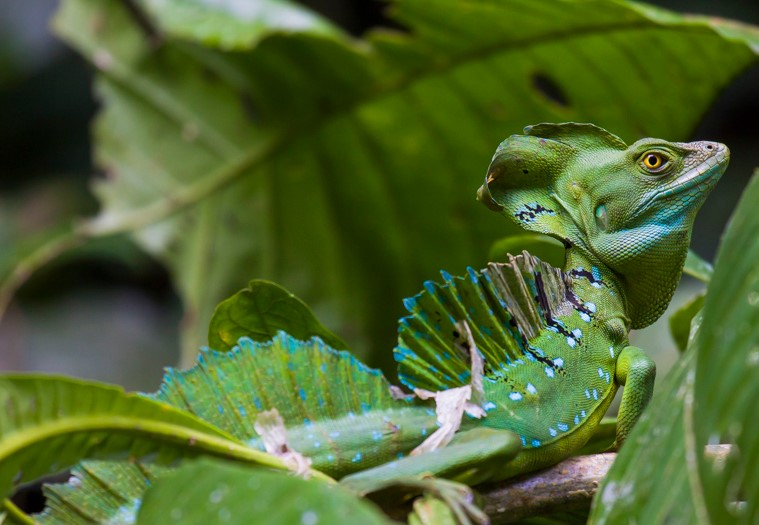 In captivity, individuals usually reach the age of 7 years. However, their average lifespan in the wild is considered to be much shorter due to predators (snakes, birds, turtles, possums). Today, these bizarre reptiles are on the verge of extinction, therefore they are under protection.

Basilisks are abundant in the rainforests of Central America. Their habitats stretch from southern Mexico to Panama. Reptiles spend most of their time in trees near water. When the lizards are in danger, they jump into the water (in an upright position).

Walk on the Water

Most animals that try to walk or run through water drown immediately, like water, unlike solid soil, provides little support or resistance.

In order to understand how the Basilisk lizard moves on the surface of the water, work was carried out to observe and fix the run. With the help of computer programs, the researchers match adjacent video frames, so that the balls of water can be seen moving, supporting the amphibian on the surface. This allows you to calculate the strength of the reptiles and prevent them from drowning.

Basilisks achieve running on the water with the help of their long fingers on their hind limbs with a fringe. They unfold in water, increasing the contact surface area. The principle of such movement can be determined in three stages. 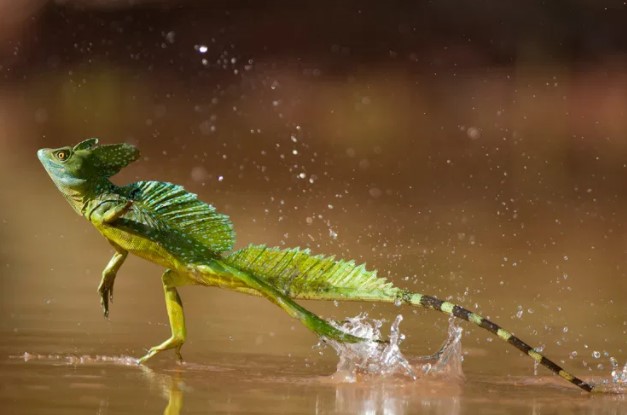 First, the foot slams in the water and is repelled from its surface, while air pockets form around it. Next comes the movement of the foot backward, and the body of the lizard is pushed forward. In the end, the limb rises up out of the water, the clap occurs again, and the cycle continues. The maximum distance traveled depends on the size and weight of the lizard. Young individuals, as a rule, run longer distances (from 10 to 20 m) than the older generation (up to 4.5 m).

This running is similar to cycling, but the moment the pedaling stops, the bike stops, loses its balance and falls. The same happens when a Basilisk runs on water. The reptile stays on the surface only under the condition of continuous footwork. These reptiles remain one of the most mysterious creatures in nature. Basilisk can run on water up to 400 meters at a speed of 12 km / h.

The most popular exotic domestic reptiles are Green Basilisks. People have learned to grow them at home. Wild individuals do not take root well in an unnatural environment, unlike those that were bred in an incubator. Characteristically, the coloration of domestic Basilisks has changed slightly. It became not bright green, but bluish. It is better to keep a Basilisk lizard in pairs.

Each Basilisk needs a terrarium of up to 200 liters. In addition, a swimming pool is required. It is necessary to create conditions that are as close to natural as possible. That is, the bottom of the terrarium should be sandy or with small pebbles. In the arrangement of the territory of residence, driftwood, moss, plants should be present. Temperature (25-35 degrees) and light conditions (up to 14 hours) are very important for reptiles. For this, lamps are installed, heating and daylight.

In nature, Green Basilisks, at the slightest danger run away at full speed or jump from the branches into the water. In the terrarium, however, they can crash into a glass that is invisible to them. So it’s a good idea to keep them in a terrarium with opaque glass or cover the glass with paper. Especially if the lizard is young or caught in the wild. A 130x60x70 cm terrarium is sufficient for only one individual, if you plan to keep more, then choose a more spacious one.

Various types of soil are acceptable: mulch, moss, mixes, rugs. The main requirement is that they retain moisture and do not rot, and are easy to clean. The soil layer is 5-7 cm, usually enough for plants and to maintain the air humidity. Sometimes, Basilisks begin to eat the substrate, if you notice this, then replace it with something inedible at all. For example, a mat or paper.

The terrarium needs to be illuminated with UV lamps for 10-12 hours a day. UV spectrum and daylight hours are critical for reptiles to help them absorb calcium and produce vitamin D3. If the Basilisk does not receive the required amount of UV rays, then it may develop a metabolic disorder. Note that the lamps must be changed according to the instructions, even if they are not out of order. Moreover, these should be special lamps for reptiles, and not for fish or plants. All reptiles should have a clear separation between day and night, so the lights should be turned off at night.

Natives of Central America, Basilisks still endure fairly low temperatures, especially at night. During the day, there should be a heating point in the terrarium, with a temperature of 32 degrees and a cooler part, with a temperature of 24-25 degrees. At night, the temperature can be around 20 degrees. For heating, you can use a combination of lamps and other heating devices, such as heated stones. Be sure to use two thermometers in a cool and warm corner.

In nature, Green Basilisks live in a fairly humid climate. In the terrarium, humidity should be 60-70% or slightly higher. To maintain it, the terrarium is sprayed with water daily, monitoring the humidity with a hydrometer. However, too high humidity is also bad, as it promotes the development of fungal infections in lizards. Green Basilisks love water and are great for diving and swimming. For them, constant access to water, a large body of water where they can splash is important. It can be a container or a special waterfall for reptiles. The main thing is that the water is easily accessible and changed daily.

The Green Basilisk is a predatory animal, so ninety percent of its diet should consist of meat, the rest is plant food. Animals are very fond of newborn rats, mice, and lizards. You can also throw raw fish pieces into a pool or aquarium. They will like various midges and insects, cockroaches and locusts, grasshoppers, and worms. Some eat naked mice, but they should only be given sporadically. They also eat plant foods: cabbage, dandelions, lettuce, and others. You need to cut them first. Adult Basilisks need to be fed plant food 6-7 times a week, or insects 3-4 times.

Small lizards are fed several times a day and only live food, be sure to sprinkle with a food supplement for reptiles. And already an adult is fed four times a week, adding the vegetable feed to the diet. 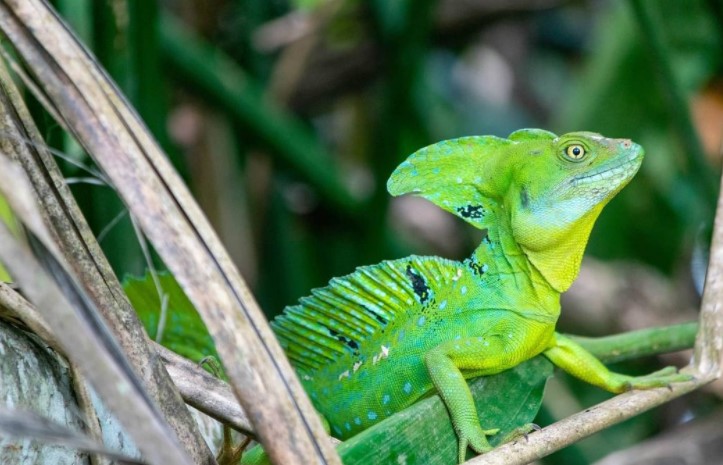 Females are smaller in size, weighing about 200 grams. Males are distinguished by high ridges on the head and back, which they use to impress females. The female lizard reaches maturity at the age of 20 months, while the males mature after 16 months of life. However, males actually cannot mate until they reach sufficient status in the dominance hierarchy, which can take 3-4 years.

The breeding season can last up to ten months. In January and February, mating is rare in such a reptile species as the Basilisk. A female lizard, being pregnant, prepares a shallow trench, in which she then lays up to 20 eggs. The mother then leaves them and the babies must hatch on their own. On average, this happens after about 88 days. Cubs are able to swim in water from birth. 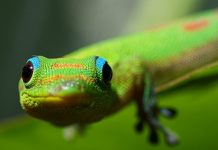