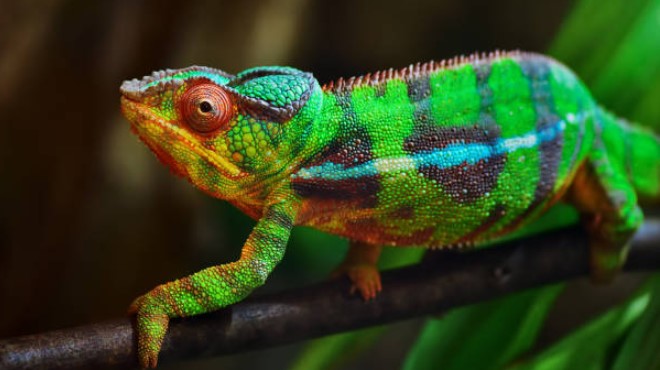 The Panther Chameleon is a brightly colored lizard reptile species that lives in the rainforests of the Republic of Madagascar. These rainbow Chameleons are very common in the pet trade, and their popularity is largely due to their outstanding variegated, mottled body. The creatures change color in the same way as other Chameleons, but in a very impressive way. The shades and tones of geographically isolated populations are extremely different from each other, depending on their species.

For the first time, a Panther Chameleon was described by the naturalist Frenchman Georges Cuvier in 1829. The generic name Furcifer, derived from the Latin root furci, meaning “forked”, and characterizes the shape of the animal’s legs. The specific name pardalis refers to the color of the animal because in Latin it sounds like “leopard” or “spotted panther”. The English word Chameleon comes from the Latin chamaeleō, borrowed from the ancient Greek χαμαιλέων (khamailéōn) – a combination of two words, χαμαί (khamaí) “on earth” + λέων (léōn) “lion”. The oldest described Chameleon is Anqingosaurus brevicephalus from the Middle Paleocene (about 58.7–61.7 Ma), originally from China.

It is interesting! Chameleons are probably much older, a common ancestor with iguanids and agamids over 100 million years ago. Since fossils have been found in Africa, Europe, and Asia, Chameleons were certainly more common before than they are today.

Although almost half of all Chameleon species now live in Madagascar, this does not suggest that Chameleons originate from there. In fact, it has recently been shown that they most likely originated on the African mainland. There may have been two distinct migrations from the mainland to Madagascar. Scientists have hypothesized that the various Chameleon species directly reflect the increase in the number of open habitats (savannas, grasslands, and wastelands) that accompanied the Oligocene period. Family monophyly is supported by research.

Male Panther Chameleons can grow up to 20 cm in length, but the most typical length of animals is about 17 cm. Females are smaller, about half. Males are more brightly colored than females. The body is colored in various shades of blue and green, and sometimes black, with bright spots of yellow, pink, orange, and red. Male Chameleons often have vertical stripes of red and blue on their bodies. Yellowish Chameleons are also not uncommon.

It is interesting! The coloration varies depending on the location. The various color schemes of Panther Chameleons are commonly referred to as “locales,” meaning the species are named according to their geographic location. 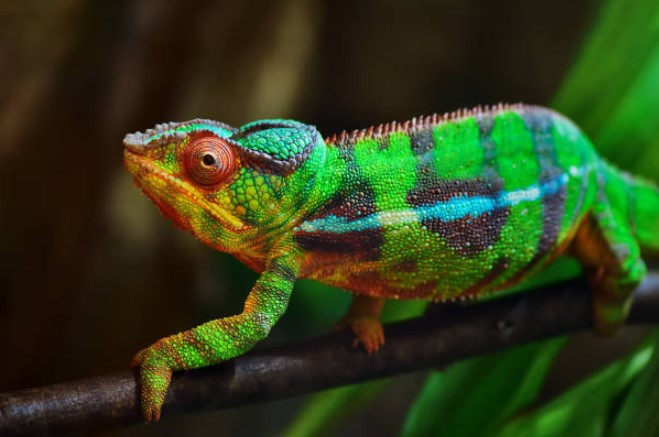 Females tend to remain brown or brownish with shades of pink, peach, or bright orange no matter where they are, but there are slight differences in patterns and colors between the different color phases of different species. Males weigh between 140 and 185 grams and females between 60 and 100 grams.

Male Panther Chameleons have small protrusions protruding from their heads.

Although the Chameleon Panther is native to Madagascar (near Africa), the species has also been introduced to the main island of Mauritius and the neighboring island of Reunion, where it has settled in the wild as an invasive species. In Madagascar, this species is found mainly in the flat areas in the eastern and northeastern part of the island, ranging from 80 to 950 m above sea level, although less often found above 700 m.

Panther Chameleons live much closer to forest soil than many other species. They live in the foliage of small trees, in areas covered with rainforest. Their range is a small range of places, mainly in areas with abundant vegetation. The green cover helps them to survive, since they are arboreal animals and live exclusively in trees, and not on the ground. 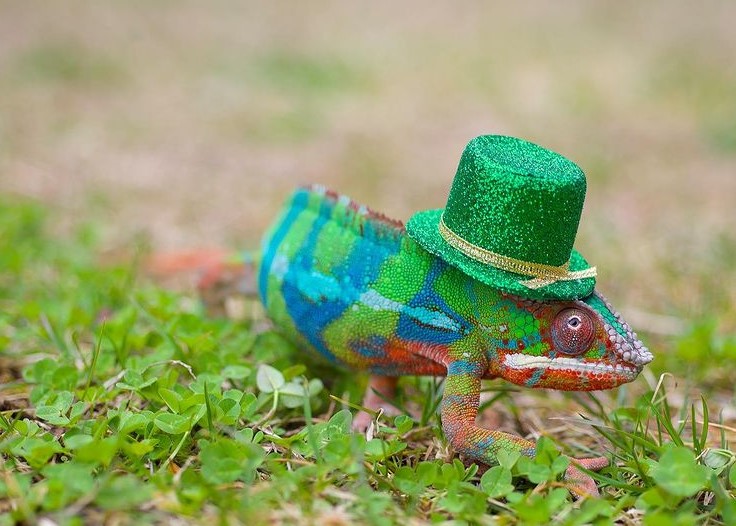 These lizards vary in color, and each variant corresponds to a specific area that the species has naturally occupied. Panther Chameleons get their names according to the locality where they come from, followed by the term “chameleon”. The following types are currently defined:

Their natural habitat is the coastal rainforest in the northern regions of Madagascar. Outside the island, they live as pets all over the world around the world as pets and as invasive species in Reunion and Mauritius.

A spacious upright terrarium is required to keep the Panther Chameleon. The minimum dimensions for keeping one animal are 60x40x80. It should be noted that in small terrariums it is extremely difficult to control the temperature. Also, such terrariums are poorly ventilated, which can lead to serious illness of the pet. In general, ventilation is one of the most important parts of a Chameleon’s terrarium. It should consist of two mesh-covered technical holes, of sufficient width, located in the lower front of the terrarium and its ceiling.

Lighting is an important component of any terrarium. As the main light in terrariums, fluorescent lamps with a low content of the ultraviolet spectrum are used. Such lamps are produced by various import manufacturers and are marked with 3.0; 5.0; 8.0; 10.0. The numbers indicate the percentage of the ultraviolet spectrum. That is, a lamp with a marking of 5.0 contains 5% of ultraviolet rays in its spectrum. For Chameleons, lamps with 5, 8, and 10 percent ultraviolet light will go. The fluorescent light should be connected to an electronic timer. Daylight hours should be 11-13 hours. 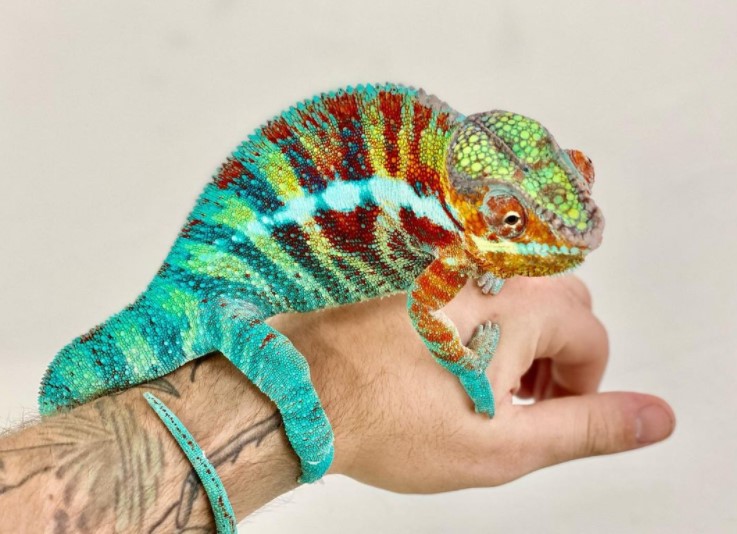 Mirror incandescent lamps are usually used to heat the terrarium. In most cases, a 40-75 watt lamp will be required. The lamp is placed from the inside of the terrarium, in the upper part, near the ventilation hole. The heating lamp must be connected via a thermostat. Otherwise, you will not be able to control the temperature, which in the case of overheating can lead to the death of the Chameleon. Overheating is much more dangerous than hypothermia! Use the heating lamp only during the daytime. At night, for the health of a Chameleon, a natural drop in temperature is required.

For a Panther Chameleon to live comfortably, humidity needs to be in the range of 60-90 percent. It is achieved by systematic spraying of the terrarium from a spray bottle. You can also equip your terrarium with a sprinkler. Too low humidity can affect the quality of the Chameleon’s molt, and can also increase the risks of respiratory diseases.

The main food of Panther Chameleons is all kinds of insects, small reptiles, and rodents. Adults occasionally hunt small birds. Chameleons hunt in a peculiar way. Reptiles are distinguished by excellent patience and can wait for prey in ambush for hours, disguising themselves as part of a tree branch or its foliage. When the prey gets into the reach of the Chameleon, he immediately throws out his tongue, at the end of which there is a similarity of a sucker with which, almost as quickly, he pulls the caught victim into his mouth. But Chameleons chew food slowly, not in a hurry.

Young Panther Chameleons should be fed every day. Adults are allowed to feed every other day, otherwise, you should sometimes arrange so-called fasting days. Females are especially prone to overeating, which can negatively affect their health. All Chameleons have rather weak livers and obesity is not good for them.

Cricket is the optimal food for the home. It has an optimal balance of nutrients and is available in almost all more or less large pet stores. Crickets are easy enough to breed on your own. Locusts are also excellent food. Chameleon Panthers love these large and phlegmatic insects. When feeding large locusts, it makes sense to remove the hind limbs covered with sharp thorns. Slightly less nutritious and loved by Chameleons are various types of forage cockroaches. Many of them have a repulsive musky smell that a lot of reptiles don’t like. Fatty foods, such as mealworms, wax moths, should be fed to the Chameleon no more than 5-6 times a month. Newborn mice should not be offered to the Chameleon more than once a month. This type of food is not required at all and can also overload the reptile’s liver.

Before feeding insects to a Chameleon, they should be properly dipped in calcium and vitamins for reptiles. As a rule, a ratio of 3 parts of calcium to one part of vitamins is used. Growing and sick animals need vitamins and mineral supplements the most. With a varied diet, the number of vitamins for adult Chameleons should be significantly reduced. Calcium without vitamin D3 can be given with every meal. Calcium overdose is not possible. The surplus will be excreted naturally.

Panther Chameleons in nature replenish their moisture reserves by licking abundant morning dew from tree leaves. At home, adult Chameleons, as a rule, need to be drunk with a syringe or pipette, or a decorative waterfall or drip bowl is installed in the terrarium. Drinking bowl, it is easy to make yourself from a medical dropper. Newborn and juvenile reptiles are most easily induced to drink by sprinkling the foliage and glass of the terrarium with a spray bottle liberally.

Panther Chameleons are considered quite aggressive reptiles, but not as aggressive as their Yemen counterparts. However, keeping females and males together in the same terrarium is not recommended.

The female should be planted with the male-only for the time of mating. For Chameleons, courtship begins with a mating ritual. The male “swells”, demonstrates to the female all his brightness and beauty. He approaches the chosen one nodding his head from side to side. If the female is ready to mate, will most likely reciprocate. In the case of reciprocity, she will calmly wait for his approach, tightly clinging to the branch. If the female is not ready for mating, she responds to the courtship of the male with an arched back, hiss, and warning threats. In this case, the male usually leaves the chosen one, waiting for better times.

During mating, the male Panther Chameleon climbs onto the female and pushes her several times, after which she lifts her tail, demonstrating her readiness. Copulation time is about half an hour. Moreover, the female remains ready for mating for another 3 days. Having become pregnant, females become nervous and their appetite increases sharply. As a rule, within a few days after mating, females change their usual color, to chocolate or even black with pink spots. Pregnancy lasts up to 2 months. When it is time to lay eggs, the female descends to the bottom of the terrarium and begins to look for a place for future laying. As soon as the female begins to descend, it is necessary to place a container filled with wet vermiculite or coconut fiber in the terrarium. Having found a loose and moist substrate, the female will dig a small hole in it where she will lay 15 to 30 eggs. Two weeks after laying, the female will be ready to mate again. 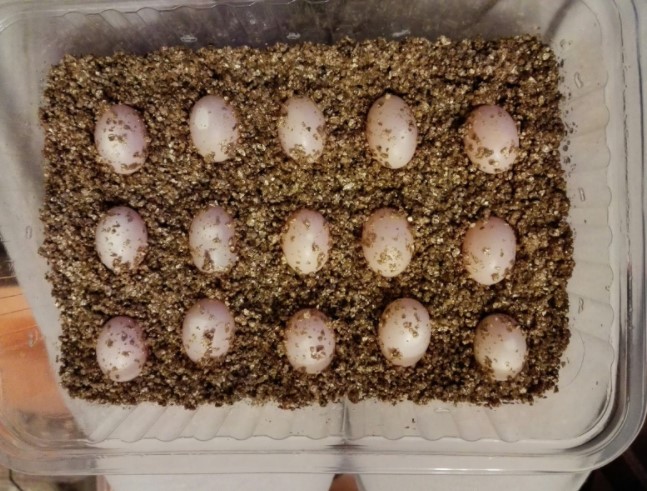 The eggs laid by the female should be immediately transferred to the incubator, digging them in with a moist substrate by two-thirds. The eggs in the incubator should be positioned in the same position in which the female laid them. Otherwise, the embryo will die. The eggs are located at a short distance from each other. The incubation period in Panther Chameleons lasts on average 8-9 months, and it also covers the winter season, which requires an additional decrease in temperature. The masonry must be ventilated periodically. The substrate must be kept moist. Otherwise, the eggs will die. Spoiled eggs should be removed from the incubator immediately. They can cause mold, which can spread to healthy eggs over time.

If everything goes well, then after 9 months tiny babies will be born, which should immediately be transplanted into a previously prepared terrarium. Babies are fed fruit flies, “cricket dust” and newborn cockroaches. As a rule, Chameleons begin to eat on the same or the next day.