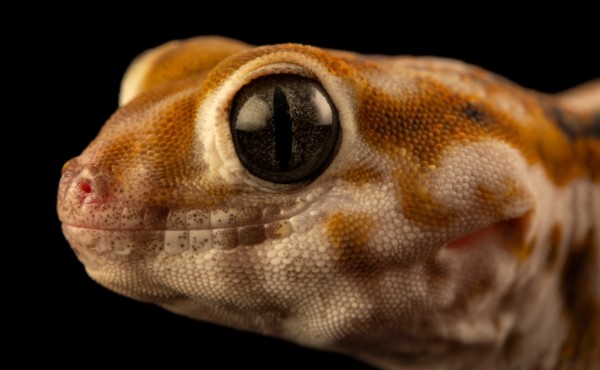 Frog-Eyed Geckos (Teratoscincus) are prized for their beautiful coloration. However, as a pet, this lizard is not very popular due to its circadian rhythms. It is active mainly in the dark, so it is not very convenient to watch the gecko. And although this genus includes only 6 species, sometimes it is distinguished into a separate subfamily Teratoscincinae. Its most typical representative is the Teratoscincus scincus gecko. The eyes of the gecko have an amazing feature in the dark to shine with a ruby ​​sheen.

The Frog-Eyed Gecko is not a very large lizard with a wide and high head, adorned with large protruding eyes. The approximate size of a reptile is 16-20 cm. Its body is rather short and awkward, covered with almost identical large rounded scales as if overlapping each other and thus resembling tiles. On the head, these scales become noticeably smaller and take the form of polygons. Only the shields near the corners of the mouth are more aesthetic and correct. The color of the gecko is quite varied – yellowish or greenish with a gray tint on top, rusty-red in the upper lateral part, and purple-smoky in the lower. On the back, there is a pattern of several dark stripes or more chaotic stains and coffee-colored spots, and the same dark stripe runs along each side, and the abdomen is almost white, only a lemon tint appears on the throat. Males have dark spots on their hind legs, and a large genital bursa is noticeable near the tail. Females are generally more restrained in color. The short tail of Frog-Eyed Geckos is covered with large nail plates and is a rather fragile part of their body. Lizards easily throw it back in the event of an attack by a predator. And the scales on the tail are also fragile, easily peeling off when touched carelessly.

Also, Frog-Eyed Geckos lack the femoral and preanal pores found in some other reptiles. And the main distinguishing feature can be called eyes glowing with ruby ​​light in the dark – this feature was immediately noted by observers of the nightlife of these lizards. The Frog-Eyed Gecko has an average lifespan of about 10 years. And he becomes mature when he reaches one and a half years.

Frog-Eyed Geckos are terrestrial lizards, burrowing deep enough in the sands, up to a meter of burrows. They are active at night, in the mornings or evenings, when the sun has not yet risen or has already disappeared. These loners are territorial and prefer not to violate the boundaries of other creatures. Only during the mating season can two males clash in a fight.

Frog-Eyed Geckos can squeak and emit a characteristic crackle with scales on their tail, designed to distract the attention of a predator and serve as a warning signal for other reptiles. They go to winter in the fall at different times, depending on the surrounding climate in a particular area. And in March-April, the first individuals are already coming out of the winter torpor. However, the Frog-Eyed Gecko is preparing carefully for winter. He digs a deep passage in the sand at an angle, climbs inside, reaching the wet layers of sand, and closes the entrance to it with the same sand plug. So the lizard not only hibernates but also spends the daytime, going hunting only at night. 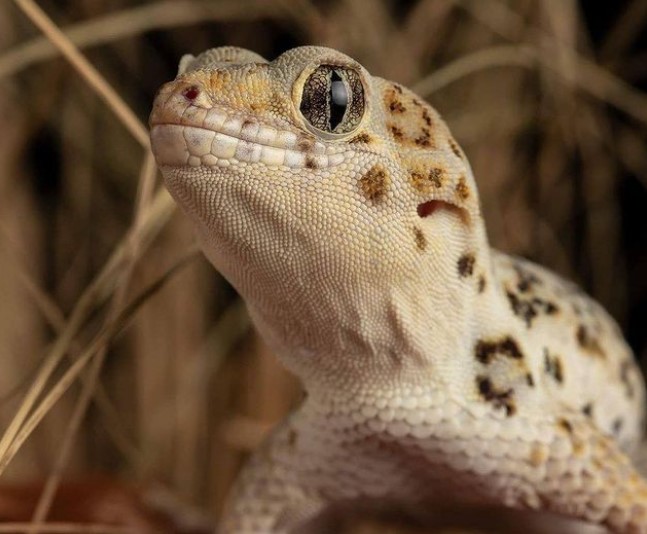 The Frog-Eyed Gecko hunts mainly for insects and their larvae, which it finds on the surface of the earth. It is interesting to watch its movement: this reptile runs quite fast, raising its body high on outstretched legs and lifting its tail, becoming more like some small animal. However, the Frog-Eyed Gecko still does not go far from its shelter. True, you can hardly see him during the day, except that you can find footprints-stars from his paws in the sand. But at night with a lantern, people easily catch these reptiles, since the bright light blinds them and leads to a state of short-lived numbness, sufficient to catch them. But even if the gecko is captured, he still has the opportunity to escape, leaving the enemy only a wriggling and crackling tail. Zoologists noticed that if you place such a tail in an aviary with other geckos, then they will immediately panic because of the possible danger of which it is a sign. These reptiles generally easily part with this part of their body and quickly restore it to its original form. And they also shed surprisingly, climbing into burrows for this in nature. But in the nursery, zoologists managed to see how Frog-Eyed Geckos grab the skin lagging behind the body, tear it off and eat it. And from the limbs, they remove the scales, like a glove. In captivity, Frog-Eyed Geckos gradually get used to humans. And when they get used to it, they begin to boldly take the food offered with the help of tweezers and are even able to climb into the palm to warm up.

Frog-Eyed Geckos are very cute terrarium dwellers. But you need to keep in mind that the scales and skin of these lizards are very fragile, they instantly peel off, exposing the muscles. This is one of the gecko’s forms of protection – leave scraps of “clothing” to the enemy and run away. Because of this feature, these geckos are very difficult to catch and completely impossible to take with your hands. However, they quickly get used to a person, tame, and can climb on their own. However, when a gecko is angry, it bends in an arc, opens a pink mouth, hisses, shakes, makes deceptive swoops sideways, and wags its tail threateningly. It might even bite, but it doesn’t hurt. 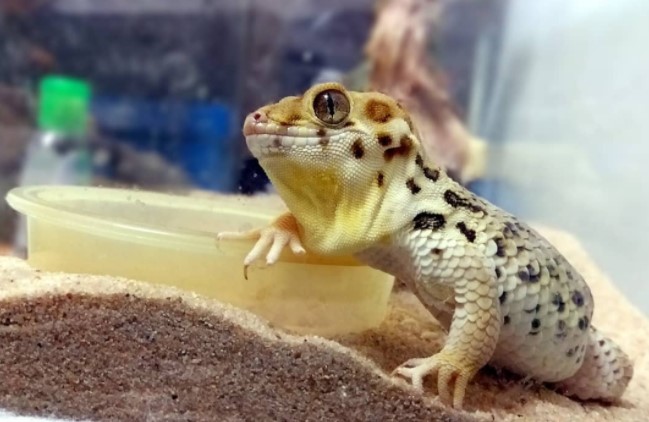 They contain geckos one by one or one male for 2-3 females. Adult males do not get along in the same terrarium. A horizontal terrarium is required as a dwelling: its minimum size for 1-2 individuals is 40x30x30 cm. A layer of clean dry sand (at least 10 cm) is poured onto the bottom with a bottom humidification system. The terrarium should be illuminated and heated from below with a heating mat. The temperature in a warm corner should be maintained at 30-32 ° C during the day and 20-22 ° C at night. Daylight hours are about 12 hours. In the terrarium, in both warm and cold corners, shelters are needed: driftwood, ceramic pots with an entrance, pieces of bark, etc. The terrarium is sprayed once a day.

Frog-Eyed Geckos, like other lizards, feed on various insects and small invertebrates that they manage to catch. These are, for example, darkling beetles or May beetles, sometimes an ant or some kind of arachnid can be the prey.

And in terrariums, lizards are recommended to give banana crickets, various cockroaches, self-bred or purchased mealworms, and even small newborn mice – but not very often. Young animals should be fed in the same way as adult lizards, only in slightly smaller portions. The feeding regimen is at least once every two days, but daily is better. And of course, you should not leave your pet without water, which also needs to be changed every day. You can occasionally mix mineral water with ordinary water, and once a month it is necessary to fortify the diet of geckos with various additives and feeds for reptiles. 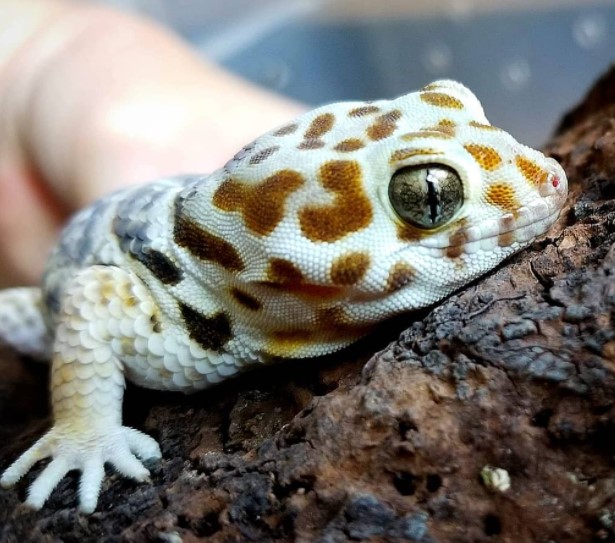 Breeding Frog-Eyed Geckos is unlikely to reveal any new information for connoisseurs. It is an oviparous reptile species. They reach maturity at 1, 5 years of age when the body length becomes approximately 10 cm. The female Frog-Eyed Geckos nest in a complex burrow with several passages, where they hide in the main chamber during the day and lay their eggs.

Moreover, in some cases, lizards can share their refuge with other creatures, for example, a large ground beetle, dung beetles, or even jerboas and gerbils. The peak mating season for geckos is in mid-spring, and laying is done in early summer. Pregnant female lizards go for about a month. In a clutch of various types, there can be from 1 to 4 small, but with a hard, calcareous shell of eggs. Sometimes people happened to find common clutches of several females in one nest. But, one way or another, the warm and dry atmosphere of the burrow leads to the fact that after 2, 5-3 months, small geckos are born, only 5-6 cm in size. First, newborns feed on the reserves of the yolk bladder, and then they can begin to eat small insects. And young animals need calcium, at least every other day. In good conditions, a female can produce offspring 2-4 times a year.

Breeding Frog-Eyed Geckos in a terrarium is also possible, and this species is bred quite well. True, he first needs to arrange an artificial wintering, and then pick up the laid eggs in time. Interestingly, in nature, incubation takes place in a dry and warm climate, and it is recommended to create a higher humidity in an artificial incubator. 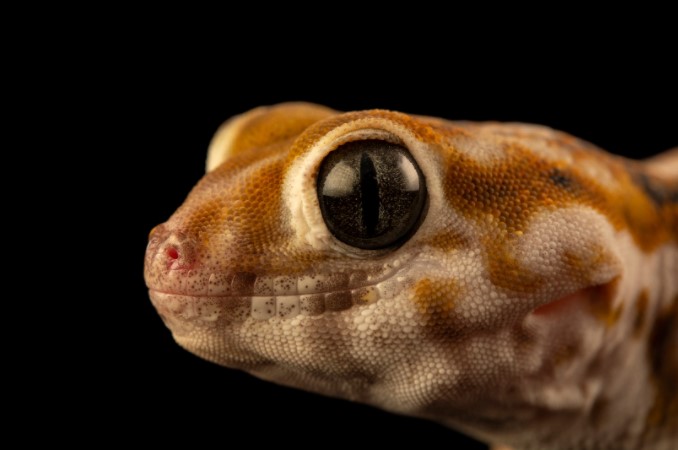 For home maintenance, the Frog-Eyed Gecko is suitable, but it must be remembered that in everyday life it manifests itself as too gentle a creature. A male and female Frog-Eyed Gecko in the same space can easily injure each other even during mating. Therefore, after mating, you need to try to remove the male as quickly as possible. These lizards have many interesting features. And one of them is the ability to make sounds … with a tail. The fact is that the gecko’s tail is covered with nail plates, which rub against each other during its movement, and a characteristic crackling occurs. 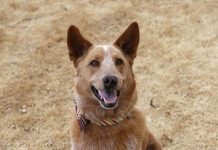