Blue-Tongue Skinks (Tiliqua) are large, smooth-bodied lizards primarily found in Australia and Oceania. These animals call “house cats” among lizards, they are so affectionate, friendly, and absolutely not aggressive. About 7-8 species of different Blue-Tongue Skinks are known in nature.

They owe their amazing name to the bright purple color of the tongue. Australian Skink species are named according to their habitat. For example, Intermedia skinks live in the north. And they differ from the southern species in color. Northern Blue-Tongue Skinks are the easiest to distinguish from others – their color is predominantly light brown with a pattern of black, orange, or yellow stripes. And southern Skinks have a darker body color.

It is almost impossible to buy a real Australian Blue-Tongue Skink for your own terrarium today, since the laws of Australia prohibit the export of these lizards, like other representatives of the local fauna, out of the country. Therefore, most likely, it will be possible to buy a Skink artificially bred in some nursery. The breeding of these lizards is widespread since it is necessary to maintain the number of their artificial populations due to the inability to acquire and breed real Australian Skinks.

The common Blue-Tongue Skink is perhaps the most typical member of the genus. He, like many other Skinks, is large in size, in length it can grow up to half a meter or more. But standard terrarium Skinks rarely reach more than 50 cm. There are also very small lizards – these are Dwarf Skinks up to 10 cm in size, and there are also giants, for example, the northern subspecies of the common Blue-Tongue Skink can grow up to 70 cm. The body of Blue-Tongue Skinks is wide, powerful, but as if flattened, with large scales, smooth and even iridescent in the light.

Despite the large size of the body, the triangular head of the lizards with powerful jaws still stands out. But the legs of the Skinks are short. There is a whole legend about these paws, as well as about the blue language of the reptile. It says that in order to heal its sick owner, the Skink had to carry healing ink in his mouth and run very quickly. Since then, these lizards are short-footed and blue-tongued. In fact, scientists have not fully figured out the origin of the color of the tongue in Skinks. There is an assumption that the lizard needs it to scare off enemies, making a bright contrast with the pink color of the mouth, as well as for the mating ceremony, when males, as they say, “measure their tongues” – who is more impressive. 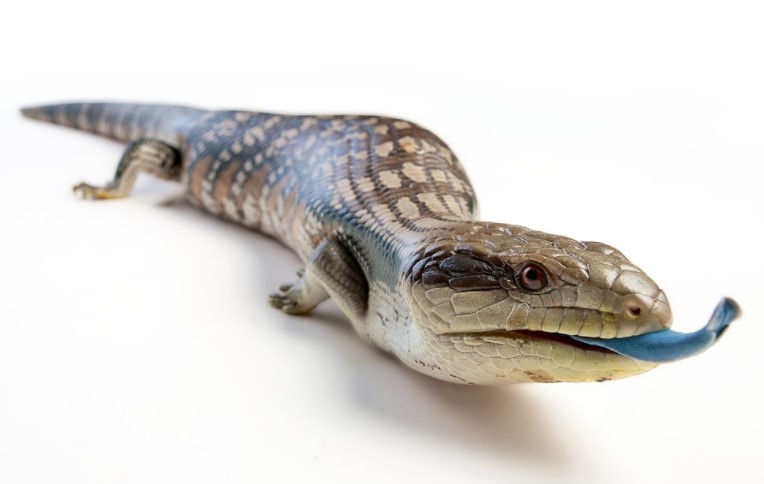 Blue-Tongue Skinks have 5 toes. Also, lizards have short and thickened tails, occupying about 60% of the body in length. The jaws of all Skinks, although powerful, are not sharp, but rather blunt, serving to crush food, and there is also a secondary palate.

Coloring in different species of Blue-Tongue Skinks, as already mentioned, is quite diverse. Take, for example, the common Blue-Tongue Skink – depending on the habitat, gray, brown, or yellowish tones prevail in the color of its body. Some individuals have black longitudinal stripes on the shoulders, transverse ones on the back and sides, as well as a dark stripe from the eye to the shoulder. All Skinks have eyes on the sides of the head and have a movable lower eyelid. Some members of the genus have several large scales on their temples, while others do not have this feature. If we talk about other types of Blue-Tongue Skinks, then perhaps the most interestingly colored one can be called a Yellow-Black Lizard. The top of her body is brown to black, and her belly is light yellow.

It so happened that the genus Blue-Tongue Skinks isolated on the Australian mainland and the nearby islands – Tasmania, New Guinea, and eastern Indonesia. And already various types of Skinks have chosen suitable places for themselves on this territory. For example, the common Skink is found mainly in the southeastern regions of the mainland, in the north, as well as on some islands, for example, on Tanimbar. The Black and Yellow Lizard lives in the neighborhood of the common Skink, as well as in northern Tasmania and the Bass Strait islands. Otherwise, these lizards settled in the west and south of Australia, in states such as New South Wales and Victoria.
The biotopes preferred by Blue-Tongue Skinks are diverse. They adapt easily to life in desert and arid areas, as well as in the lowland and mountainous Australian forests and along the coast. For some Skinks, it is important to have available vegetation nearby, and for some, a semi-desert with poor food is suitable, since it has enough resources hidden in its tail. And sometimes Blue-Tongue Skinks settle in the suburbs of Australia next to people, in gardens, and in the backyards of houses.

Lizards are also unpretentious in terms of climate. They can choose humid tropical forests, but they feel fine in cold mountain regions, and in savannas, and in shrubs, and in dry vegetation. During the day, they get out to bask in the sun and look for food, and at night they hide in various shelters – burrows, heaps of leaves, or under fallen tree trunks.

For the comfortable well-being of one pet, a spacious terrarium with a volume of 200x50x50 cm is needed. When keeping several individuals, it must be increased by 20% for each subsequent animal. Coconut substrate or shavings of fruit trees are used as soil. There should be one wet spot in the terrarium. It can be laid out with moss, which retains moisture well. Shelters are laid out of stones or spacious pottery is taken. To satisfy the pet’s need for climbing, driftwood, and thick branches are installed. 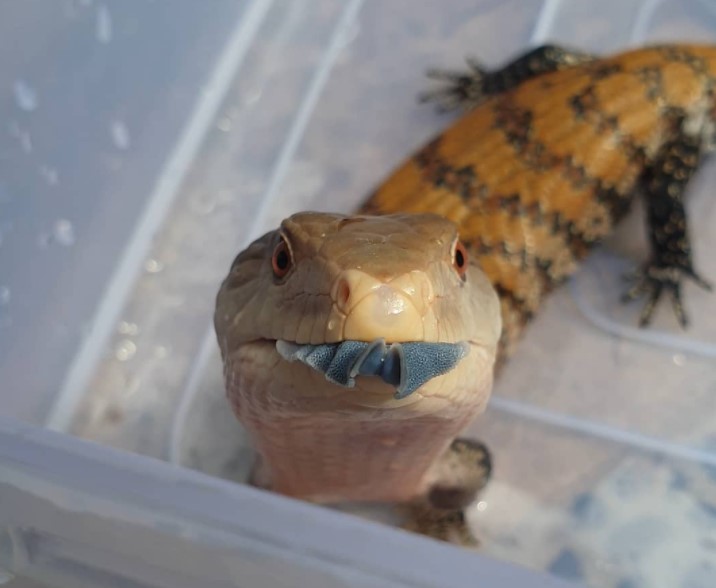 During the day, the temperature is maintained in the range of 25 ° -30 ° С, and at night it drops to 20 ° С. There must be a place for heating, heating up to 40 ° C. In this case, general overheating should not be allowed. It is desirable to maintain air humidity within 60-70%. For this, in the morning and in the evening, the walls of the terrarium are sprayed with warm water. The lighting should be uniform, using several lamps over a period of 12 hours. If possible, the terrarium is placed in a corner illuminated by the sun’s rays. Periodic illumination with ultraviolet lamps is necessary for the production of vitamin D in the body of reptiles.

Blue-Tongue Skinks are active during the day, but they don’t like the heat very much, so they hide from the heat in various shelters. They can, for example, take someone else’s hole or even climb into a crack in the ground. The Blue-Tongue Skinks guard their territory strictly and aggressively drive away strangers who have wandered into it.

In vegetation, lizards are able to crawl on the ground under the lowest branches due to the flat shape of their bodies. By nature, Blue-Tongue Skinks are loners. They live in pairs only during the breeding season. If the lizard senses danger, then it immediately becomes in a defensive pose of intimidation – inflates its body, hisses, opens its mouth wide, and shows a blue tongue. Often, the contrast between tongue and mouth frightens the opponent. How many years these reptiles live in the wild is not exactly defined, but in a terrarium or nursery, they can survive for up to 20 years. And their behavior in artificial conditions, of course, differs from the wild. 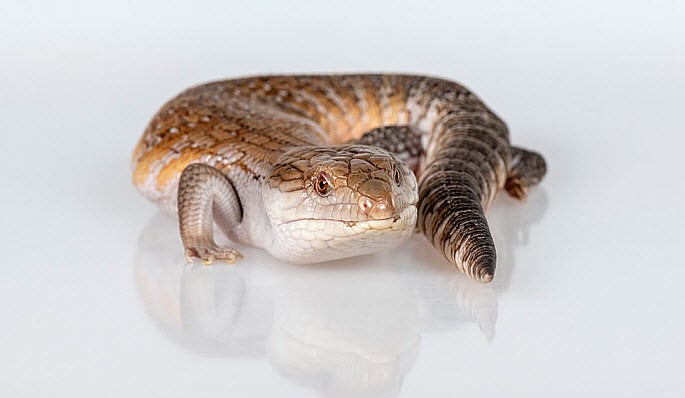 Blue-Tongue Skinks quickly get used to people and become very curious. But keeping several Skinks of different or both genders together is not recommended, as they may start to fight. Lizards move very slowly, because of their short legs, they seem to waddle, and from this, they give the impression of clumsy creatures, although, in fact, they are not. Blue-Tongue Skinks, like other lizards, shed periodically. To peel off old, dead skin, they rub against various hard objects, such as tree trunks or stones.

Lizards must be handled with care, as they are able to bite noticeably, even though the teeth are not sharp. And young Skinks are generally quite aggressive. In fights, they easily bite off each other’s tails or limbs.

Blue-Tongue Skinks are omnivorous. Most of their diet consists of various plants, but sometimes lizards dilute it by hunting small animals and insects. They will never give up the fruits, leaves, and flowers of plants, but they will gladly eat the snail they have found, as well as ruin a ground nest with bird eggs or feast on an accidentally found carrion. Large Blue-Tongue Skinks sometimes catch rodents and small lizards, while small individuals catch cockroaches, ants, crickets, and spiders. 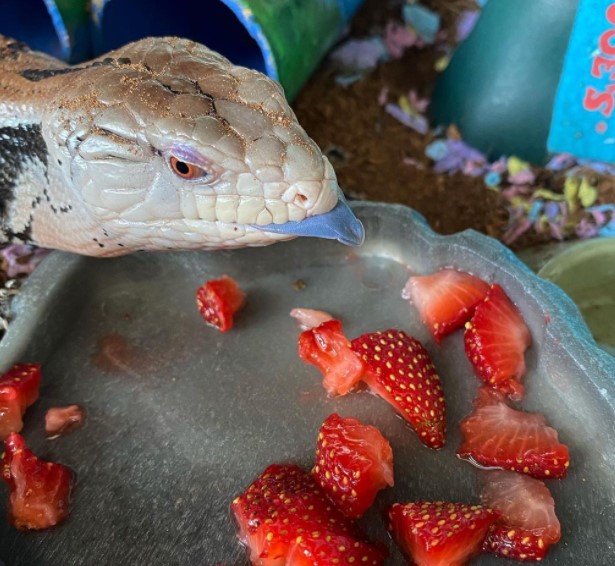 Feeding Blue-Tongue Skinks in captivity herpetologists recommend building according to this principle: it is better to make plant foods, vegetables, fruits, leaves, flowers, and shoots as the basis of the diet, and gradually add pieces of meat, boiled eggs, small rodents, and even canned cat food. And of course, it is very important to maintain the vitamin balance in the body of the Blue-Tongue Skink. For this, special supplements for reptiles are sold in veterinary pharmacies. In general, Skinks are not particularly picky about food, so the owners will have to carefully monitor so that their pet does not chew anything harmful.

The breeding season for these lizards begins in autumn, in September-November. Almost all species of Blue-Tongue Skinks are characterized by monogamy, that is, they can reproduce offspring with the same pair for several years in a row.

Mating in Skinks occurs with courtship. The female demonstratively walks in front of the male, and in order for fertilization to proceed normally, the male ready for mating grabs the female by the neck.

Blue-Tongue Skinks, unlike other lizards, are viviparous. During pregnancy, a yolk placenta is formed in the female’s body, that is, we can say that she bears developing eggs inside, and when the embryos are ready to hatch, they are born together with the placenta, which is immediately eaten. The pregnancy of Blue-Tongue Skinks lasts 4 months. In nature, they give birth no more often than once every two years. The number of young Blue-Tongue Skinks is usually 10 to 25 individuals. Babies are usually large and almost immediately independent. After a couple of days, they molt for the first time and begin to feed on their own, and within six months, the youngsters’ teeth change.