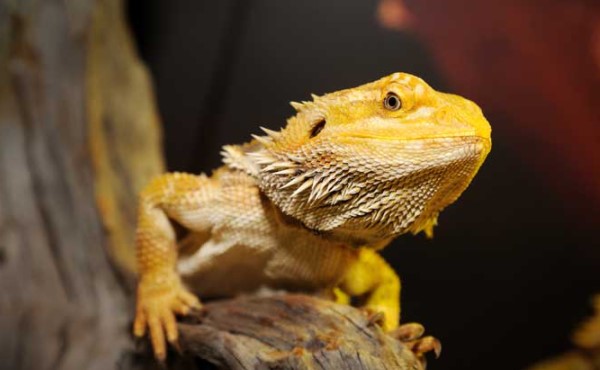 Bearded Dragon is a rather unpretentious Australian lizard, which is often recommended for beginners. Thanks to its unusual color, calm disposition, and ease of care, it is very popular today. Not to mention an interesting appearance, which casts doubt on her earthly origin.

This is a medium-sized lizard, its body is wide and slightly flattened. And the same head, a bit like a triangle. On the front of the neck of the Bearded Dragon, there are thorny scales – “beard” – located in a wedge. The same appendages surround the corners of the mouth and ear openings. Bearded Dragon has fairly strong paws of gray, brownish, or dark tone with short-clawed toes. 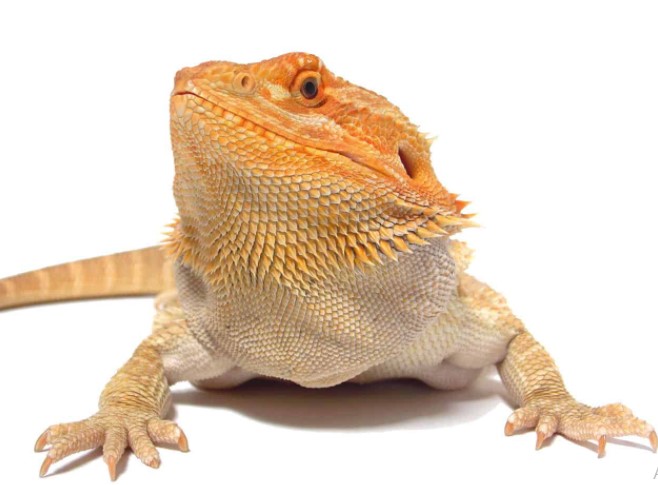 The skin around the jaws is noticeably lighter. Spiny scales cover the inside of the belly between the front and hind legs. Males are distinguished by a wider head and a thicker tail, especially at its base, around the hemipenis, the reproductive organ of lizards. The beard in males is also more prominent and darker in color, especially during the mating season, while in females it is orange or beige. The standard length of these lizards is 40-60 cm. The length of the tail is equal to about 40% of the body size. The beard becomes especially noticeable when the lizard puffs out its throat and pushes the throat fold forward strongly. In this, Bearded Dragon is helped by the elongated processes of the hyoid bone, which protrude when the Bearded Dragon opens its mouth. On the sides of the body of the Bearded Dragon, there are also spine-like processes in several rows. When a lizard is worried or prepares to defend itself, it kind of inflates its body, and these thorns spread out more to the sides. The color of the back of a Bearded Dragon can be green, bluish, or with a yellow tint and can also change depending on the mood of the lizard.

The Bearded Dragon is an indigenous Australian animal. She lives mainly in the interior rather than coastal areas of the mainland, in particular, in Queensland, New South Wales, and northwest Victoria, as well as in the east of South Australia and the southeast of the state with an interesting name – Northern Territory.

The biotopes preferred by Bearded Dragon are mostly desert and semi-desert – rocky or covered with dry vegetation, thickets of bushes. The lizard lives on the ground and sometimes in trees. She is especially active during the day, and at night and in extreme heat she hides in holes that she digs herself, or in other people’s holes, as well as in stone heaps and under the roots of plants. The Bearded Dragon also looks for coolness in the trees, in places that are well ventilated. Each lizard has its own territory, which it tries to keep. Sometimes a Bearded Dragon can be found in cities, next to people. 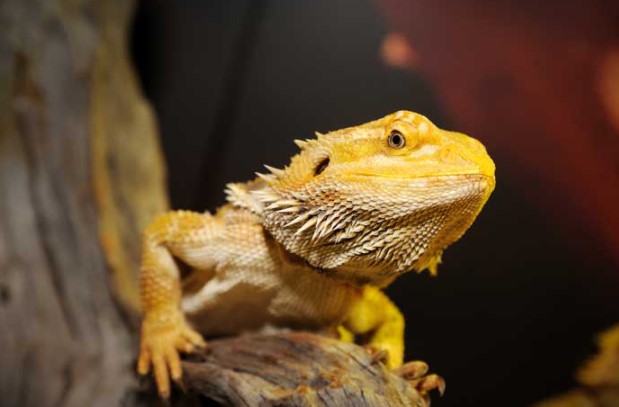 The menacing appearance of the Bearded Dragon can be confusing. In fact, this creature, if tamed, is very affectionate, easy to handle. However, during the mating season, males show a frightening outfit – they inflate their necks and protrude scales, which immediately noticeably darken. The lizard behaves in the same way when it defends itself. By the way, Bearded Dragon is quite fearless. She is in no hurry to run away from the enemy but tries to scare him. In addition to external changes during aggression, Bearded Dragon can snort, actively wiggle its tail, hiss, and jump, squatting on its paws, which is very reminiscent of a frog. It is easy to tell by the color of the beard the mood of the lizard – the darker it is, the more worried the Bearded Dragon is. And in terrariums, you hardly find Bearded Dragons with long tails, although this is a natural sign of the animal. When several lizards are kept together, collisions are possible between them, in which Bearded Dragons bite off each other’s tails. And although the place of injury soon heals, the tail itself, alas, never grows again. Therefore, experienced terrarium keepers try to keep Bearded Dragons separately, which is only possible in well-equipped nurseries.

Keeping a Bearded Dragon in captivity is a fairly simple task, but some features should still be remembered. If you divide them into several types, you get rules related to different aspects of the lizard’s life. Start with your terrarium equipment. It is desirable that it be horizontal, with a volume of 400-500 liters. Young Bearded Dragons can be placed in a smaller space, but over time it will become cramped for grown lizards. And in a glass terrarium, there must be good ventilation and not very high humidity, no more than 30%. 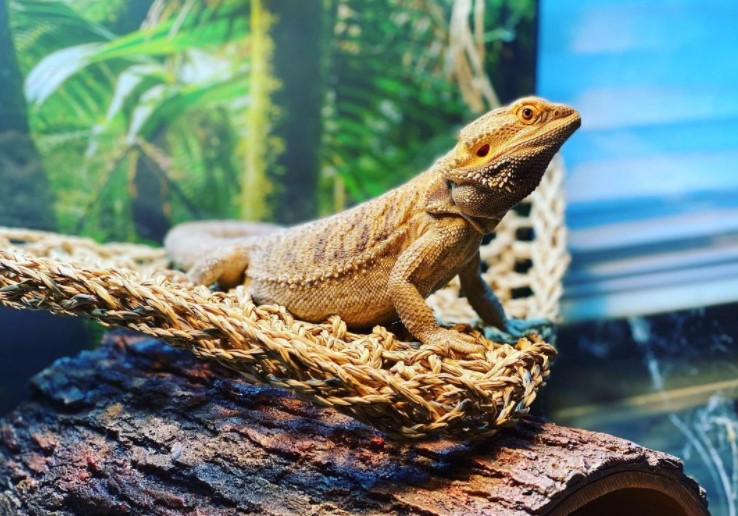 For “bedding”, some experts advise against taking sand or small stones, since a Bearded Dragon can easily swallow them with food. But large stones will not work either, since the lizard needs to bury itself in the ground. Therefore, it is best to choose some kind of non-clumping filler, for example, specially made for lizards in zoological stores. Filler for rodents may also work.

The Bearded Dragon is a thermophilic creature, so you should create ultraviolet lighting for it, for example, using special lamps for reptiles. And, of course, it is very important to provide the Bearded Dragon with a suitable temperature. It would be nice to install some kind of heat source in the terrarium, next to which the lizard can warm up, and find coolness in other corners. At night, the terrarium should keep at least +20 degrees. As additional heat sources, you can use, for example, heating mats, cables, warm stones. Stones are the most preferred option since they are the same natural material that Bearded Dragon uses in the wild.

Water is very important for a lizard. Bearded Dragons, accustomed to droughts, drink little. But in order to avoid dehydration, it is recommended to bathe the lizard a couple of times a week. And while bathing, she can drink.

And finally, like any originally wild creature, Bearded Dragon needs freedom at least sometimes. You can let the lizard go for a walk around the room, but only on the condition that there are no others in it, possibly posing a threat to the reptile or capable of scaring it. The heat-loving Bearded Dragon should not be lowered to the floor so that it does not catch a cold. It better to let her move around the furniture. But it is not recommended to plant it on a fleecy carpet, since the pile can get tangled around the lizard’s fingers and cause tissue necrosis.

The maintenance and care of the Bearded Dragon are not difficult. The main thing is not to forget about baths and feed them correctly. The continuation of the pet’s life will depend on this.

These lizards are omnivores, that is, they eat both plant and animal food. The ratio of these types of food is determined based on the age of the agama. So, the diet of young individuals consists of 20% of plant food, and 80% of animals. Gradually, this ratio changes, and upon reaching puberty, these indicators become exactly the opposite, that is, the number of insects on the menu is greatly reduced. Pieces of food must be cut, they should be no more than the distance from one eye to the other of the lizard. 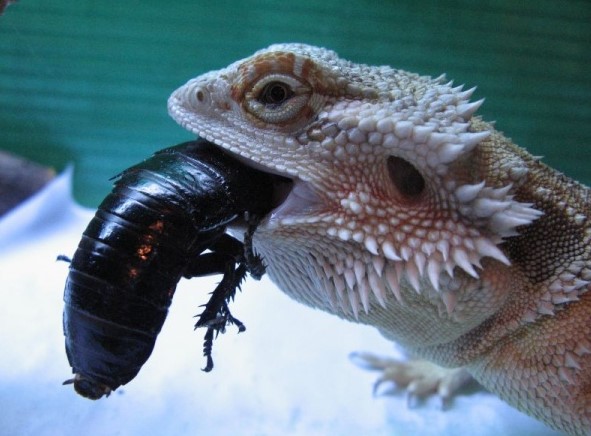 Small Bearded Dragons grow intensively, therefore they need a lot of protein. You can only get it from insects. Therefore, young lizards often refuse to eat plant food altogether. They are given insects three times a day. There should be enough food for the pet to eat in 15 minutes. After this time, all remaining food from the terrarium is removed. Adults no longer need so much protein, so they prefer vegetables, herbs, and fruits. Insects can only be given once a day.

Note that Bearded Dragons tend to overeat. If there is too much food, they will quickly become greasy and lazy.

Ripening in Bearded Dragons occurs at two years. Mating most often begins in March. To achieve it, one rule must be observed – to maintain a standard temperature regime and prevent sudden changes in it. Pregnancy in lizards lasts about a month. Bearded Dragons are oviparous. But in order for the female to lay the clutch, she needs to dig a hole 30-45 cm deep. Therefore, a pregnant Bearded Dragon is usually placed in a special container filled with sand. Do not forget that the temperature in it must be kept at the same level as in the terrarium. The lizard is capable of laying an average of 10 to 18 eggs at a time. They will ripen for about two months.

When the babies appear, they will need to be put on a protein diet. Do not leave babies in the aquarium with sand, they can swallow it and die. Place them in a container, the bottom of which will be covered with napkins. As you can see, breeding Bearded Dragons is not such a difficult process.