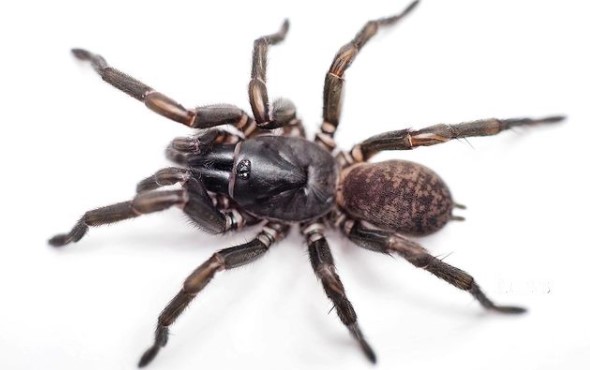 The Trapdoor Spider (Ctenizidae) belongs to the family of migalomorphic spiders. This family includes ten genera and just over a hundred species. A characteristic feature of such arthropods is the difference not only in size but also in body coloration.

Even though the appearance of this particular spider most often causes horror in all people suffering from arachnophobia, Trapdoor Spiders are absolutely safe for humans, and the maximum that a bite threatens is a weak allergic reaction. The small spider is called the Trapdoor Spider for its ability to build ingenious traps.

Spiders of the family Ctenizidae set up traps and are dangerous predators that lure their prey to a camouflaged tunnel, where the bloody massacre takes place. Different species of spiders of this family live all over the world in tropical, subtropical, and temperate climatic zones.
Habits: hide in an underground tunnel during the day, hunt at night. Food: Insects living on the surface of the earth and other invertebrates. Life Expectancy: Usually 1-2 years.

With the help of sharp claws, spiders form balls of earth and carry them to the surface. The entrance to the spider’s burrow is closed with a lid, which is a thick or thin shell, which consists of soil and several layers of yarn. The spiders spend a lot of time until they give the cap to the perfect shape and tightly close the entrance to the tunnel. The doors are provided with something like a curtain of cobwebs, covered with moss and plant particles. Spiders of the Ctenizidae family work for a long time, digging and equipping a tunnel, but the result of such a long work is a perfectly camouflaged underground shelter that simultaneously provides protection from the weather, enemies, and is a trap. 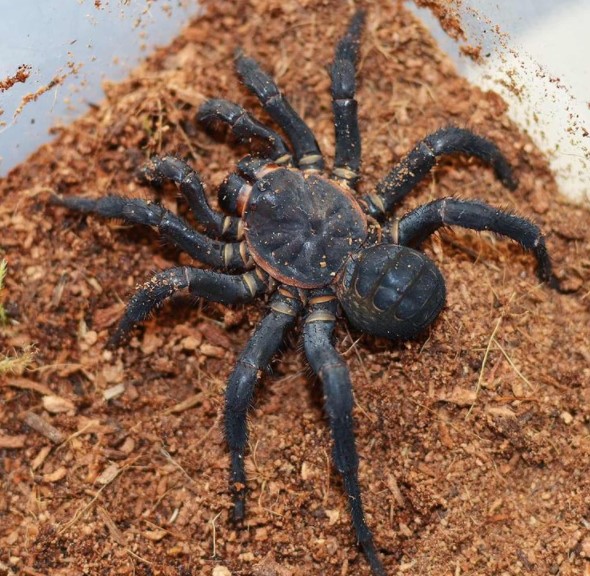 The short bristles on the spider’s paws fix at least the tremor of the earth’s surface when the insect is just approaching. Ctenizidae spiders also live in arid areas, where insects are less common. These spiders often pursue their prey, moving away at considerable distances from their burrows. Some spider species from entire settlements. An insect that has fallen into such a settlement will inevitably become their prey. Sometimes spiders weave nets near shelters and even hang them among the branches.

Mating for male Trapdoor Spiders can end tragically. Female spiders are usually larger than males. Sometimes in the female, instead of the reproductive instinct, the hunting instinct wakes up, and then the potential partner turns into a victim. Most females never leave their burrows, so they spend their entire lives in a tunnel. Males find females thanks to the scent of pheromones that females give off. Also, males find females behind the spider webs surrounding the females’ hiding places. Many males of the family Ctenizidae perform a mating dance, but females, who have very poor eyesight, usually do not pay attention.

Spiders are extremely strong – some individuals can move a load, the mass of which is 140 times their own weight, from their place. Female Trapdoor Spiders can spend their entire life in a burrow, gradually expanding their shelter. Spiders of the Ctenizidae family, which live in arid regions, often dig tunnels under lonely trees, the shade and moisture of which attract numerous insects. The tunnel can be of various shapes, the simplest is a straight corridor with round arches. It can be up to 60 cm long and about 4 cm in diameter. As soon as potential prey approaches the entrance to the hole, the spider immediately opens the door, grabs it, injects poison into it, and pulls it underground.

Of the forty known species of these spiders, less than ten have been described in detail and well enough studied, and thirty-three species have been discovered relatively recently. Despite the wide distribution area, insufficient knowledge is due not only to the nocturnal lifestyle but also to the secrecy of this arthropod.

It is interesting! Several species of Ctenizidae got their name after very famous characters or just famous people, including Sarlacc from the cult and world-famous saga “Star Wars” and the President of America – Barack Obama.

The diversity of the species makes it very difficult to carry out the most accurate identification, therefore, it is recommended to focus on the following main characteristics inherent in spiders from the family Ctenizidae: 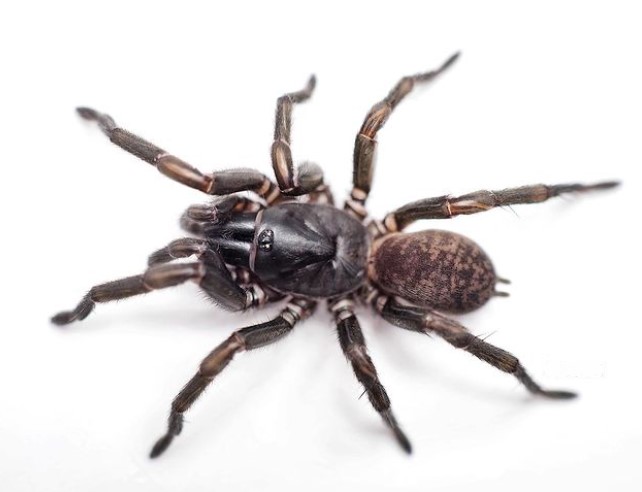 Males have short and coarse spinning organs. A double process is present in the middle of the forelimbs. A characteristic difference is the presence of a dull carapace covered with hairs of a pale golden color. The palps have an external resemblance to boxing gloves. The eyes are arranged in two close rows of four. A feature of some varieties is not two, but three rows of eyes. Trapdoor Spiders are often confused with murine and venomous Australian Funnel-Web Spiders.

From a geographical point of view, the distribution of Trapdoor Spiders can be considered chaotic, which is often explained by the characteristics of continental drift. Numerous species of the family are found in almost all countries. Populations of this arthropod inhabit the territory of the southeastern and Pacific States of America, Guatemala, Mexico, the Chinese provinces, as well as a significant area of ​​Thailand, Canada, and Australia. 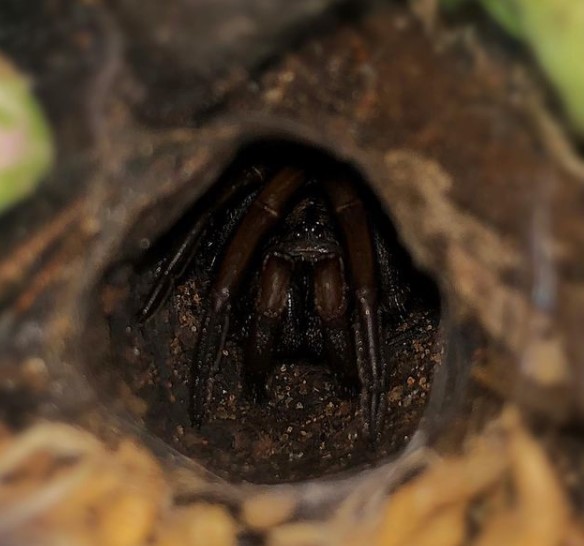 It is interesting! Almost all species have been described by the American Ctenizidae expert Jason Bond, who heads the Museum of Natural History. In a scientific article, the scientist expressed his sincere surprise at the extraordinary diversity of the environment suitable for the habitation of the Ctenizidae.

Trapdoor Spiders of various species are especially common in coastal dunes, oak forests, and the high mountain ranges of the Sierra Nevada. The Trapdoor Spider is distinguished by intelligence and cunning, therefore it can arrange trap holes with a blind branch. The entrance and branch are covered with a dense web cover, and the prey trapped in such a trap will no longer be able to get out.

A tropical spider living in an underground burrow can wait for its prey sitting in a dwelling, around which special signal threads of a web are located. As soon as a small insect runs past, the door of the mink is thrown open, and the arthropod pounces on its prey with lightning speed. To catch prey, very powerful forelimbs are used, and paralyzing toxins are injected into the victim with the help of hollow poisonous teeth. To catch any prey, Trapdoor Spider will take no more than 0.03-0.04 seconds.

It is interesting! Despite its small size, not only insects but also other medium-sized arthropods, as well as small vertebrates, can become prey for an adult Trapdoor Spider.

In the process of hunting, spiders themselves can unwittingly become prey for the road wasp. This insect stings a spider, resulting in incomplete paralysis of the arthropod. The parasitoid lays eggs in the body of an immobilized spider, and the spider itself becomes food for the emerging offspring of the road wasp.

The reproduction of the Central Asian Ctenizidae is most indicative. It is a small arthropod whose body does not exceed a couple of centimeters in length, has a reddish-brown coloration, and a naked, striated abdomen. Adults dig burrows, the depth of which is often more than half a meter. The finished mink is lined with cobwebs from the inside, and the entrance is closed with a special lid with a “closer”. Such a door closes on its own and makes the home safe and comfortable. The laid eggs are clothed in a cocoon and the spider’s offspring that are born live in the “parental dwelling” until they become completely independent. For food, chopped and semi-digested food is used, which is regurgitated by the female. 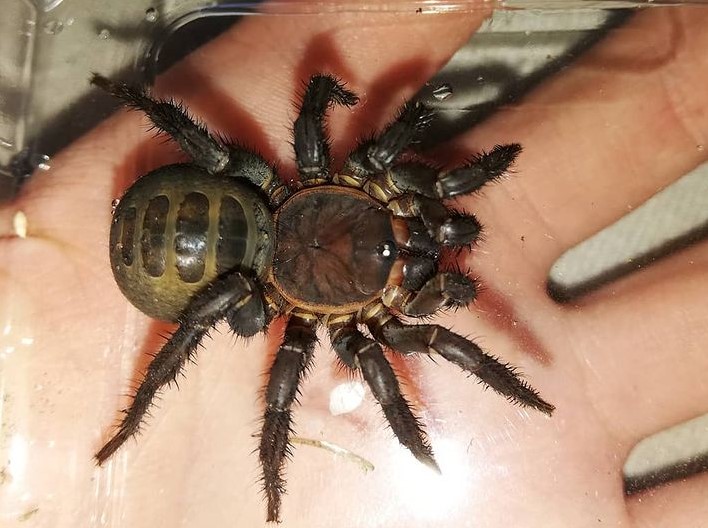 At home, these spiders are extremely rare. As a rule, individuals caught in their natural environment are used as pets. In captivity, it is advisable to keep those breeds that build their dwellings from wood. If in their natural habitat females can live for twenty years, and males – four times less, then at home such arthropods, as a rule, die quickly enough.

A characteristic feature of Trapdoor Spiders is the presence of sharp thorns on the chelicerae, thanks to which the arthropod can dig the ground quickly enough. When keeping such a pet at home, you need to allocate a roomy and deep terrarium filled with soil, which will allow the spider to make itself a home. A tropical arthropod needs a stable temperature regime and optimal humidity.

These original insects have a very aggressive character. Nevertheless, unlike the Tarantula Spiders, they are in no hurry to attack large prey. Small insects are included in their diet. At the same time, Trapdoor Spiders cannot be called gluttons, they are very moderate in food and can even starve for six months. But to withstand such a hunger strike, they first need to crawl into the shelter and surround themselves with a kind of cocoon.