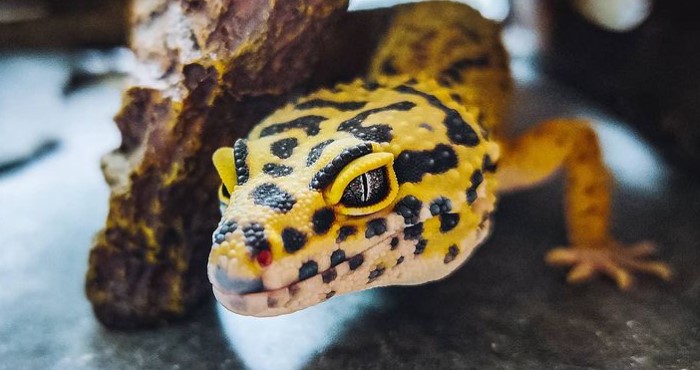 Leopard Geckos – smiling cute lizards. Living at home, they have established themselves as friendly and active pets. Few people know that in the wild, Leopard Geckos are tough predators.

Leopard Geckos are small lizards. Formally they belong to geckos, they are their suborder. Geckos have a fleshy, dense body, a large tail, and a short, flattened head. The progenitor of all geckos is the lizard Ardeosaurus brevipes. Its remains are found in fossils of the Jurassic period, in its constitution, it resembles an almost unchanged gecko. The body of Ardeosaurus was approximately 20 cm long, with a flattened head and large eyes. He was probably a nocturnal predator, and his jaws were specialized for insects and spiders.

Geckos are a very large order that includes more than a thousand species and about a hundred genera. The selection of individual species of lizards is controversial since many of them differ from each other only at the molecular level.

Leopard Geckos come in different types, depending on which their color and size vary. Usually, adults are about 160 cm in size, excluding the tail. The tail of these lizards is their characteristic feature. It is thick, much shorter than the body, and very mobile. It has a leaf-like shape. Leopard Geckos have a disproportionately large head. Unlike other lizards, it is not elongated but flattened, like an arrowhead. 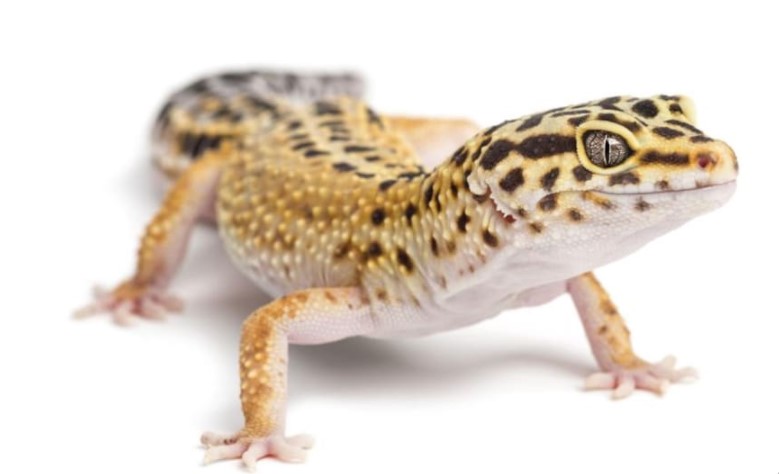 The movable neck expands into a rounded body, which also tapers towards the end. The eyes are large, from light green to almost black, with a thin black pupil. Small nostrils are clearly visible on the muzzle. The mouth line is also clear, the mouth is wide, which is why the Leopard Gecko is called the “smiling lizard”.

The Leopard Gecko has a thick, bright red tongue that often licks its face and eyes. The color of the lizards is very diverse: from white, yellow, red to black. They have a kind of pattern on the body – small brown spots, stripes, black asymmetric spots, etc. The whole body of Leopard Geckos is covered with soft relief growths. Despite their thin paws, Leopard Geckos run great. They move, wriggling with their whole body like a snake, although they cannot develop high speeds.

Scientists are aware of several species of these lizards, which differ in appearance and live in different places. The most popular ones are:

However, the most famous among terrariums remains Eublepharis macularius – the largest and best adapted for life in captivity.

Leopard Geckos prefer rocky or sandy terrain. It depends on their color, which is an important part of the lizard’s camouflage. They hide under stones or burrow into the sand, becoming invisible and immune to the scorching sun. 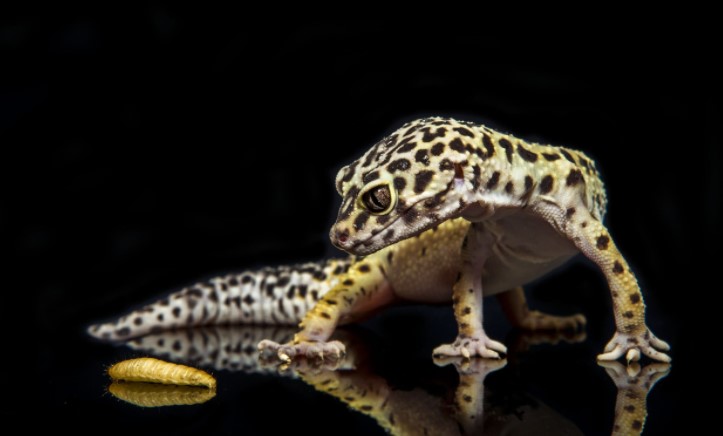 In the wild, Leopard Geckos are active hunters – they wait in ambush for various insects or even small mammals. For a short time, lizards are even able to chase their prey, making short rapid dashes.

At home, Leopard Gecko is fed the following foods:

Before feeding, they give plant food so that the insect meat is better absorbed. It is best to give specialized supplements in the form of vitamins, dry herbs, and calcium. The pet ignores berries, fruits, and vegetables. It is best to feed with tweezers, bringing the food directly to his face. Otherwise, during the hunt, the Leopard Gecko may eat the ground or pebbles, and the cockroach or cricket will successfully escape from the terrarium. Feeding occurs no more than 2-3 times a week, but you need to give from five crickets.

Leopard Geckos eat only live food, and if, for example, a grasshopper has been killed, it must be fresh. Also, Leopard Geckos need a lot of freshwaters – it needs to be changed every day, creating a small flat bath in the terrarium.

Leopard Geckos are friendly, nocturnal lizards. In the wild, during the daytime, they hide in dug shelters, under stones, and other objects. At night, they go out into the open area, where they disguise themselves as surroundings and wait for prey. Leopard Geckos have become popular pets due to their personality traits. They are not at all aggressive towards humans, they will never bite and will not be afraid (if, of course, they are competently handling a lizard). They are ideal for keeping in homes with other friendly animals or children. 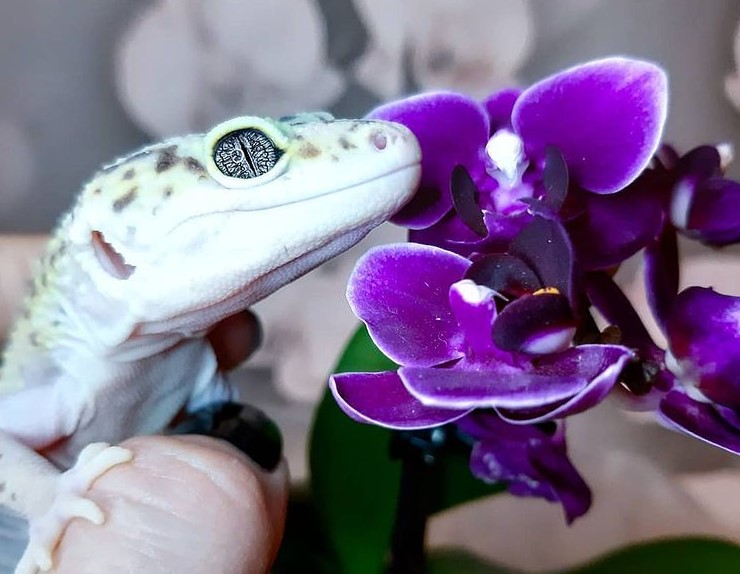 Leopard Geckos are solitary in the wild, but they can be kept in pairs in terrariums. The main thing is not to put several males in the terrarium since they will constantly divide the territory, fight, and may even injure each other. In the wild, males behave similarly: they protect the territory from the encroachments of other males. A certain number of females live on the territory of each male, but they can freely walk in different territories. One male and several females get along well in the terrarium.

For hiding places in the terrarium should be added bark, stones, fixed pieces of trees, where the lizard can hide during the day. But they quickly adapt to different lifestyles, especially if the Leopard Gecko was born in captivity. Then they willingly contact a person during the day, eat in the morning, and sleep at night.

For one Leopard Gecko, a 40 cm long, wide and high terrarium is suitable. For a pair of geckos, it is worth increasing the length to 60 cm, but if there are more of them – from 3 to 7 – it is better to buy a terrarium even longer, up to 100 cm. The height is not as significant for them as the ground area, so you can reduce it to 35 cm. 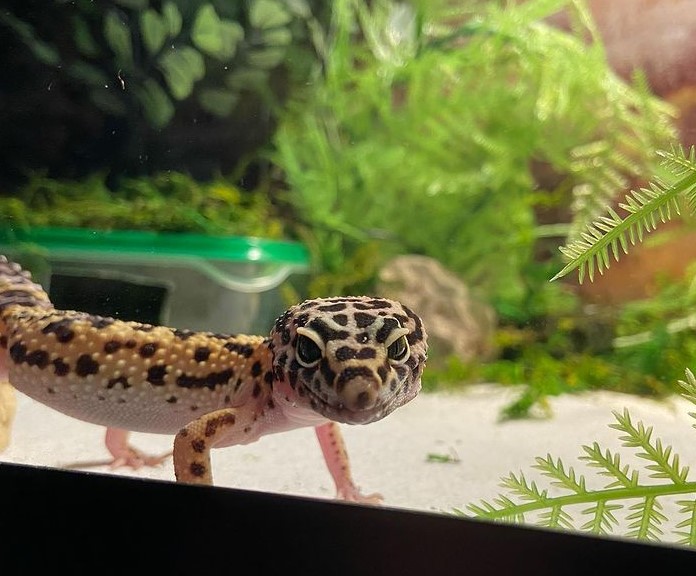 The walls of the terrarium should be glass, not plastic, as the lizard will scratch them with its paws, and over time, many scratches will appear on them. The gecko’s dwelling should have good ventilation and good ultraviolet lighting. The ideal temperature for this type of animal is between 27 and 31 degrees Celsius. Since these are tropical inhabitants, it is difficult for them to survive in conditions of a cold snap below 24 degrees. To maintain a suitable climate, you can put an infrared lamp or some kind of heated decor element in the terrarium. The humidity level should be between 40 and 55%. These parameters can be achieved by placing a drinker in the terrarium or by spraying the soil. At the bottom, it is best to place stones of a fairly large size or a rug that imitates grass. Other types of soil can be dangerous for the gecko: it can swallow small stones, and sand can get into the lungs or digestive system.

Cleaning will not be too much of a hassle, as the Leopard Geckos are clean and set up a toilet in one of the corners of the terrarium. It will be enough to remove the dirty stones and replace them with clean ones.

Because Leopard Geckos live in warm regions, they do not have a fixed mating season. The male on his territory randomly sticks to the females, regardless of whether they are mature. If the female is not ready to mate, she chases the male away. The male takes care of the female, which is ready to mate. Its tail begins to vibrate, and sometimes even a vibration sound can be heard. Then he gently bites her back and neck, and if the female does not resist, the mating process begins. 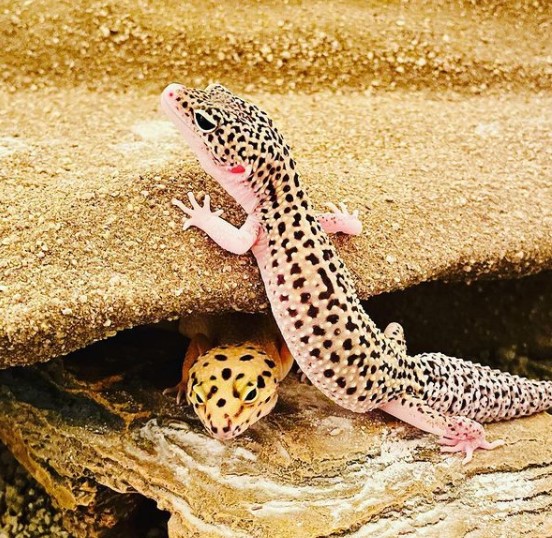 The female herself prepares the place for laying, pulling wet branches, leaves, moss, and pebbles there. She moistens the masonry with water. She lays eggs at night or in the early morning, carefully burying them in wet sand and moss. She guards eggs jealously, rarely leaving them.

The incubation process is interesting. The fact is that the child will be a female or a male, depending on the temperature:

Incubation can last from 40 to 70 days maximum. The small Leopard Gecko breaks through the soft shell of the egg on its own. Cubs are completely independent, and on the third day, they can already hunt.

Interesting fact: The courtship of a male for a female Leopard Gecko does not always end in mating. Sometimes the tail-shaking and biting rituals last for several days. If a male and a female form a permanent pair in the terrarium, then they can mate every day, but fertilization is not possible after each mating. The first pregnancy lasts one and a half months, all subsequent pregnancies last two weeks. 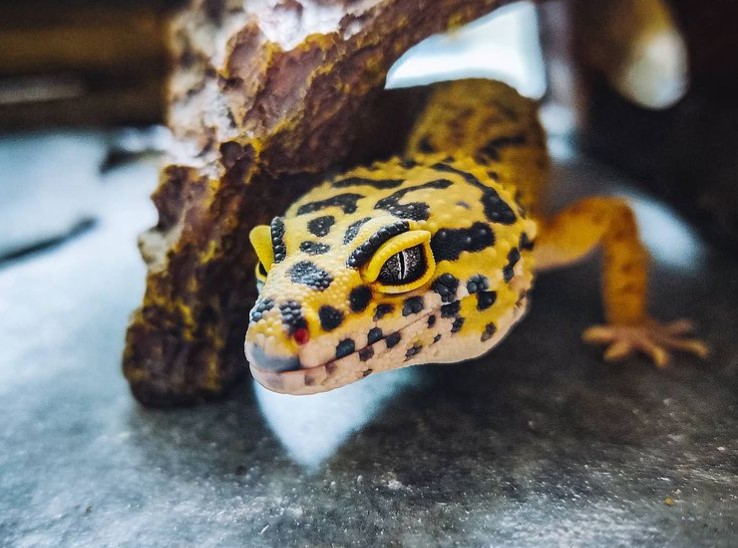 The Leopard Gecko is a lovable animal. This makes it a popular pet. When thinking about establishing a terrarium animal, you should always consider this smiling lizard. This lizard is suitable for both advanced reptile lovers and beginners. Caring for her is easy, and her character will not create problems: lizard is a peaceful and positive creature, easily attached to a person and able to show her love.