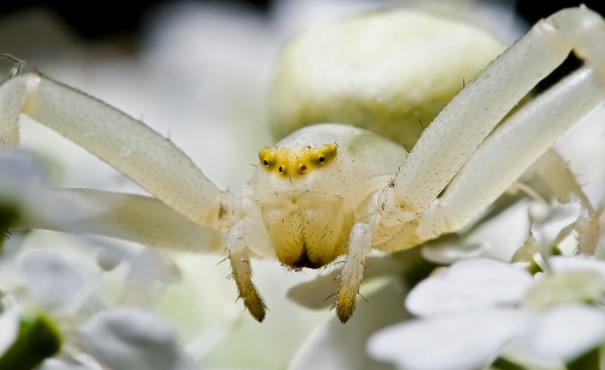 The White Widow Spider( Latrodectus pallidus)  is one of the most dangerous creatures on earth. Even though outwardly it does not seem so threatening, the poison of this arthropod is deadly.

In this regard, a spider bite for animals such as a horse or a cow will definitely end in death. For a person, an insect bite can also be fatal if the necessary amount of qualified medical care is not provided promptly. However, researchers and scientists argue that the poison of the White Widow is somewhat less dangerous than the black representative of this species.

Some scientists speculate that the most ancient ancestors of modern venomous spiders, including the White Widow Spiders, lived in water. However, during the Paleozoic period, they moved into thickets of huge grass and impenetrable bushes. In thickets of dense vegetation, they hunted various insects. Later, spiders appeared that could weave a web and entangle eggs in it for protection.

About two hundred and fifty million years ago, arthropods appeared who learned to weave webs to create traps. With the onset of the Jurassic period, spiders learned to weave multiple webs and hang them in dense foliage. To make spider webs, arthropods used a long, thin tail. Spiders spread widely throughout the land during the formation of Pangaea. Later they began to be subdivided into species depending on the region of their habitat.

The White Widow really looks sinister. It instills fear, and, worst of all, thanks to its color, it remains unnoticed. A distinctive feature of this particular species of arachnids is the body in the form of a large ball, as well as long and thin limbs. There are four pairs of limbs. The first and last pair of legs are distinguished by the greatest length. This spider is the only member of its genus that has a white, grayish, or yellowish tint.

In comparison with Black Widows, White Widow does not have an hourglass-shaped pattern. Four shallow rectangular depressions can be seen on the back surface. The lower part of the body is always white or milky. The rest of the body may be gray or yellowish. In these arthropods, males are significantly smaller than females in size. The size of the female can reach 2.5 centimeters, while the size of the male does not exceed 0.5-0.8 centimeters. 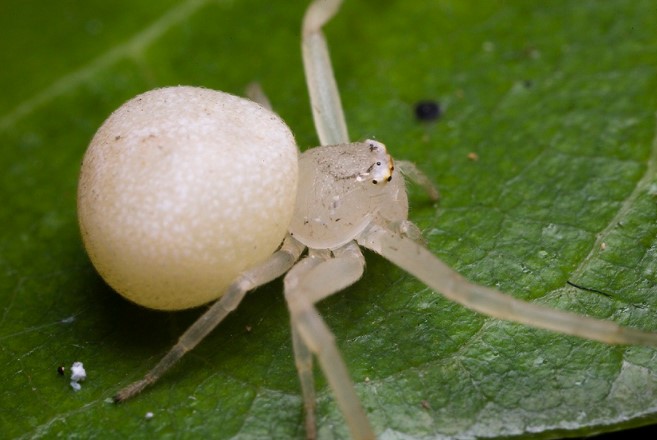 The head is small, much smaller than the body, most often brown. On the head, there are chelicerae, which are highly powerful and can easily bite through the chitinous shell of even large locusts. In the posterior part of the abdomen, there are several arachnoid warts, through which a cobweb is released into the environment. White Widow has a body structure typical of all other arachnids. It is divided into two parts – the cephalothorax and abdomen. Each of them contains vital organs. In the cephalothorax are located: a gland that secretes a poisonous secret, esophagus, sucking stomach, food outgrowths, anterior aorta. The abdomen contains:

There is an opinion that the White Widow lives only in the uninhabited regions of the Namib Desert. However, this is not true. Changes in climatic conditions lead to the expansion and change of the spider habitat. Geographic regions of arachnid habitat:

Spiders prefer an area where there is little rainfall and there is no big frost. Favorite habitats are steppes, ditches, ravines. They try to avoid flat, open areas in every possible way. Like the vast majority of arachnids, it chooses secluded, inaccessible places. Likes to hide in burrows of small rodents, crevices, in gaps between walls, and other remote, secluded corners. White Widow Spiders do not tolerate severe frosts and harsh climates. They try to avoid excessive moisture, too bright areas, and too hot climate. It is quite possible to meet White Widow on the territory of plowed farmlands, abandoned or residential buildings, in attics, under the roofs of houses and sheds.

The spider’s diet is insects that get caught in the spider’s web woven by it. Among them:

Black Widows have an extra-intestinal structure of the digestive tract. When the victim gets into the web, he pierces her body in several places and injects a poisonous secret so that the victim’s entrails are completely digested by the poison. After that, the spiders eat the liquid part of their victim’s body. 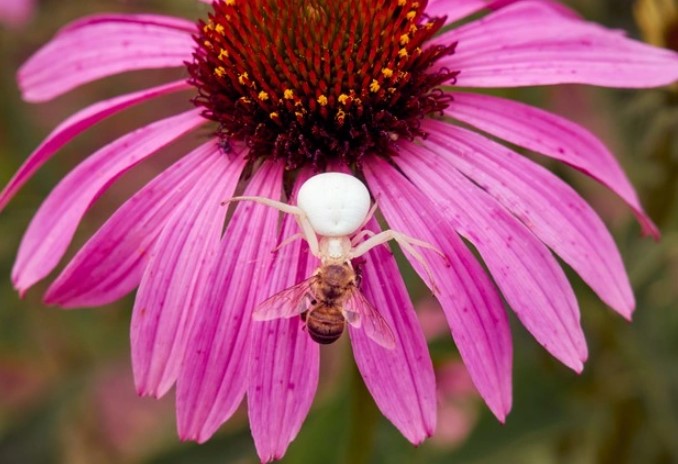 For catching insects, a horizontal web is most often used. It is characteristic that the web does not differ in a typical pattern of trapezoids, but has a chaotic arrangement of threads, which does not fold into any pattern. Most often they are placed among the foliage in such a way that it remains invisible for most insects or small rodents. Such traps are often left in holes, small depressions in the ground.

The process of assimilation of food proceeds rather quickly since almost everything has already been digested under the influence of a poisonous secret. Among the variety of food sources, locusts and grasshoppers are distinguished and preferred. White Widows literally manage to live without food or eat a very modest amount of food. With practically no food, White Widow can live for about 10-12 months.

White Widows are active regardless of the time of day or weather conditions. They can be active and go out in search of food, as well as to eat it both in the daytime and in the dark. Males are less active. They use cobwebs to make traps. Spiders do not weave it in the form of certain shapes and figures, but by simply winding threads. It can get food, like a hunter, that is, hiding behind bushes, or in thickets of dense vegetation.

Burrows of small rodents, cracks in walls, ceilings, depressions in the soil, pits, etc. are chosen as a place of residence. These representatives of arachnids have very sharply developed hearing. That is why human bites have been reported. Spiders react sharply to incomprehensible noise and, to defend themselves, try to attack first. Because a person, when meeting with him, becomes a source of unnecessary noise, spiders attack them in self-defense.

They do not tolerate frost and extreme heat. In the spring-summer period, large migrations are observed in the habitat regions. They are associated with the fact that spiders are trying to escape from the intense heat. After the White Widow finds a safe refuge, the females braid it with cobwebs and begin to prepare for the appearance of offspring.

The period of marital relations for this representative of arthropods is seasonal in nature and begins in the middle-end of the summer period. Males try to attract the attention of the opposite sex with the help of special pheromones. In the selected shelters, the females hang the web. This is necessary so that young individuals can gain a foothold on the web and fly away in search of their homes. After the end of the mating season, the female lays eggs. Their number can reach 130-140 pieces. 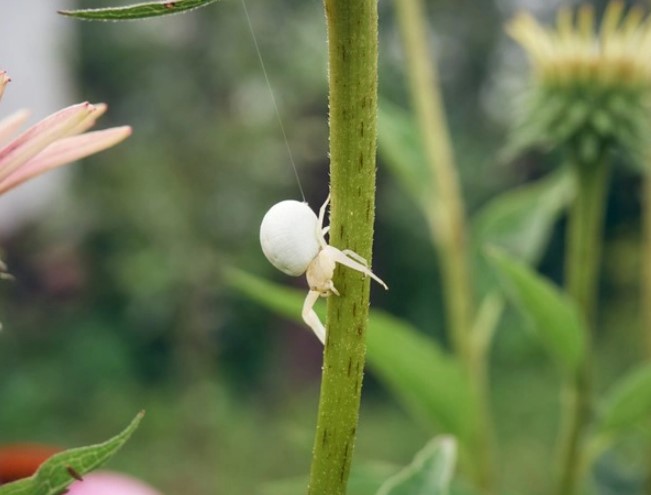 When the fall season comes, the female dies. The laid eggs wait on their own for spring in selected secluded burrows of other shelters. In the spring with the arrival of the wind, which helps to get rid of the eggshell and give birth to young individuals. The hatched spiders do not scatter in different directions but calmly remain in the hole to get stronger and acquire the necessary skills for independent survival. For this period, they have enough food, which their mother prepared in reserve.

After the maternal stores are depleted, the spiders begin to actively eat each other. As a result, only the toughest individuals survive. They leave the cocoon only the next spring, and by the summer of the same year, they become mature. White Widow is considered a very prolific arachnid. The female can give birth to offspring up to twice a year.

Even though these representatives of arthropods are practically the most dangerous in the world, they still have enemies in natural conditions, these are:

Most often, farmers who fear the mass destruction of cattle due to the bites of White Widows first allow sheep or goats to graze on a certain pasture. These animals are not sensitive to their bites, therefore, they are often practically used to secure the pasture for grazing cattle. In some regions, a large number of arthropods are noted, which are capable of destroying an entire herd of cows. 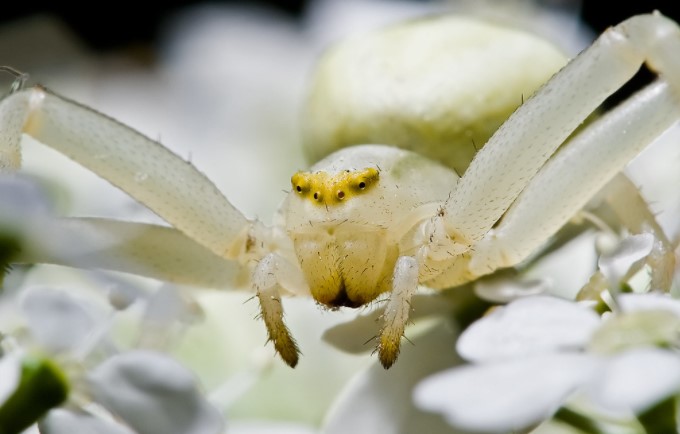 Even though White Widow is trampled by small pets in large numbers, the species is not threatened with extinction. In connection with the expansion of the territories developed by man and the change in climatic conditions, it somewhat expands and changes.

In Africa, in Central Asia, this type of spider is very common. Also, climate change and large numbers of goats do not significantly affect the number of individuals, the White Widow is not marked with any status and is not listed in the Red Book. Due to the ability to give large offspring every 10-15 years, the population of these representatives, the population is fully restored.

The White Widow is a dangerous and poisonous spider. Residents of the regions in which it occurs in natural conditions must be extremely careful, exclude walking barefoot, lying on bare ground. If an insect bite suddenly occurs, you must immediately seek medical attention.