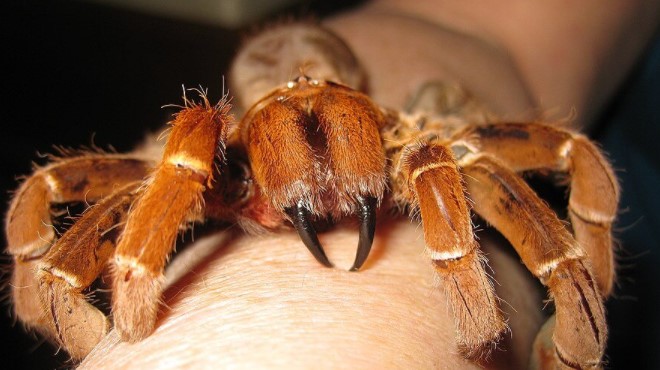 The King Baboon Spider (Latin Pelinobius muticus) is one of the largest and rarest representatives of the Theraphosidae family. The span of his legs reaches 20 cm.
By its size, it surpasses all African tarantulas and outwardly looks more massive than the Goliath Tarantula (Theraphosa Blondi), which lives in South America.

The species was first discovered and described by the German entomologist Ferdinand Karsh in 1885. The animal was originally named Citharischius crawshayi. It acquired its current scientific name in 2010 thanks to the research of the British arachnologist Richard Gallon.

The spider is unpretentious to the conditions of detention in captivity, but it has an innate aggressiveness. He desperately bites anyone who dares to invade his domain.
The bites cause severe pain and swelling for several days. The victims sometimes have muscle spasms, cramps, and dizziness. Cases of death were not officially recorded.

The body length of males reaches 10 cm and of females 13 cm. Taking into account the legs, it is 16-20 cm. The limbs of the rear pair grow to 130 mm and have a diameter of about 9 mm. They are used to dig and remove earth from an underground dwelling. The abdomen is relatively large and measures up to 70×50 mm. The length of the chelicerae reaches 19 mm. Only Teraphosa blondi has longer chelicerae (25 mm). 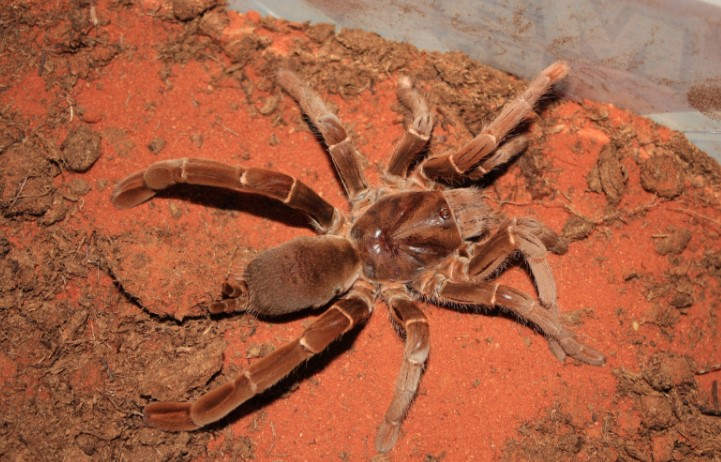 The color ranges from reddish-brown to golden brown. The hair is soft and velvety. In males, it is longer and shinier; they have no tibial hooks. The lifespan of King Baboon Spiders depends on gender. Males live on average 3-5 years or about 6 months after mating, females 8-10 years. Some females live to be 25 years old.

The habitat is located in East Africa. The largest populations live in Kenya around Lake Victoria. To a lesser extent, Baboon Spiders are found in Tanzania and Uganda.
They inhabit dry areas with an arid climate, which are characterized by significant daily fluctuations in ambient temperature and an annual precipitation rate of no more than 150 mm. Most often, spiders are found in shrubs and meadows, where the soil allows them to build underground shelters.

The Baboon Spider is solitary. In clay soil, he digs a deep inclined burrow up to 2 m long. The living chamber is located in a horizontal position at a depth of 50-100 cm. It is quite spacious and allows the animal to rotate freely in it and effectively repel the attack of aggressors. The entrance to the hole is equipped with a kind of protective strip made of loose soil, which facilitates the attack on the victim that has fallen into it. Baboon Spider leaves his underground shelter at night when he goes hunting. He does this relatively rare since he can go without food for a long time. Males temporarily part with their home when they go in search of females. 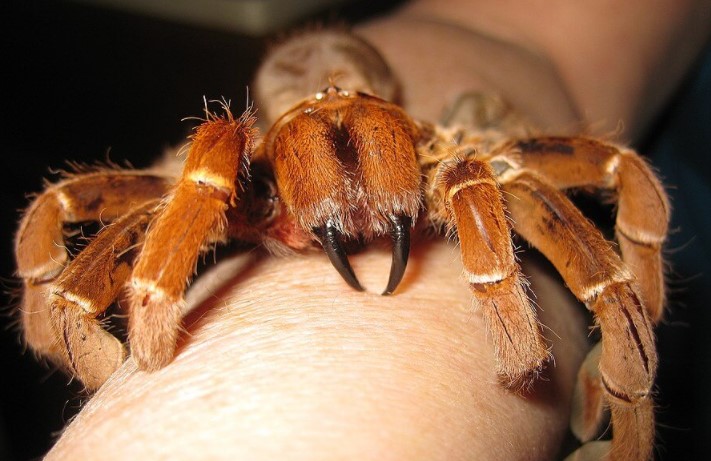 Pelinobius muticus feeds on whatever prey it can handle. The diet is based on various large insects, mainly locusts (Acrididae) and cockroaches (Blattodea). Also, the predator successfully hunts small mammals, reptiles, and amphibians. At the opportunity, he will not deny himself to feast on the hatched chicks of birds nesting on the ground.

The attacked King Baboon Spider emits threatening sounds like hiss and clicks with the help of friction of the first and second pairs of limbs. He does not have stinging hairs for self-defense, so he is forced to use methods of psychological influence on the enemy. Its main natural enemies are birds of prey and Papio.

The minimum enclosure size for keeping a spider should be plus two full legs about the spider in all directions. For juveniles, a terrarium with a volume of 30x30x50 cm is suitable. It must be high enough and covered with a lid, otherwise, the fugitive will go to explore the local attractions. The Baboon Spider is strong enough to push it back on its own. At the bottom, it is necessary to put clay soil or coconut substrate at least 15 cm thick. Holes are made in the lid for ventilation. A resident of semi-desert regions does not need high humidity, so there is no need to spray the walls of the terrarium with water more than once a week.

For full development, the spider needs an average room temperature of 23-25 ​​° C. If the room is colder, then you can use terrarium warmers. They come in a variety of sizes, attach to any surface and fit in all types of terrariums. To be constantly aware of the temperature inside the terrarium, you will need a special thermometer, which can be positioned so that it is invisible and at the same time performs its direct function. A sharp drop in temperature even by 5 degrees can be fatal for a spider! 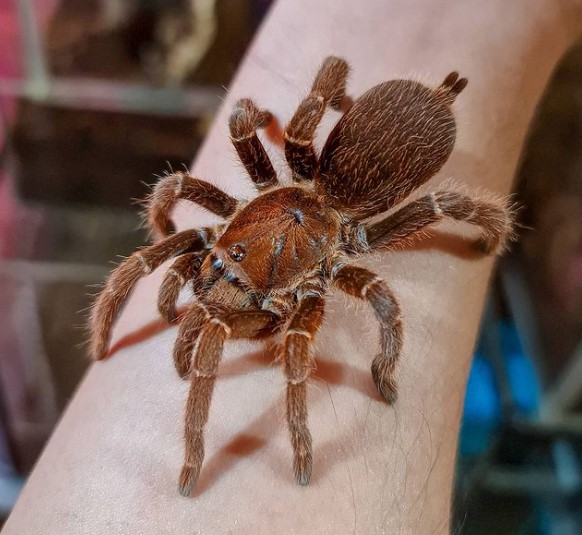 King Baboon Spiders are nocturnal animals, so do not worry that your pet has little light. On the contrary, the less light the better! The terrarium should be in a dark place. For full visibility inside the terrarium, you can use moonlight lamps. They will create an imitation of a night savannah or tropics. At the same time, you will be able to observe the spider without creating a stressful situation for it. They can also perform a heating function. Under no circumstances should the terrarium be placed in direct sunlight, because they are fatal to the spider! Do not use ordinary lamps to illuminate the terrarium!

The design of the terrarium is important only for the owner because a terrarium is interior decoration. The use of living plants and natural materials is very problematic and can often harm the spider. Also, most plants need light, which is the opposite. Therefore, the best solution will be the decorative ornaments of the terrarium, which will be safe for your pet and convenient during cleaning. When using other decorative elements, they must meet the following requirements:

Baboon Spiders are carnivorous animals. That is, they eat meat. Any creature suitable for it in size serves as food for the tarantula. Adults can even feed on frogs, mice, or lizards. The main thing to remember is that the food should not exceed half of the spider’s body in size, otherwise the spider will be afraid of food, which will lead to constant stress and further rejection of it.

There are special food insects for terrarium animals that are suitable for all stages of spider development. Do not feed the Baboon Spider with captured insects or wild animals. they can carry disease! Remember! Do not leave the food insect with the spider for more than a day, as it can cause stress and food refusal! Do not leave leftover food in the terrarium, as this can lead to mold growth and the development of parasites! Do not force the spider to eat before / after / during molt!

The little spider needs to be fed as much as it wants. For good growth, it needs a constant supply of food and a high temperature. An adult spider can be fed once a week / two. The main thing is not to overfeed, because, in captivity, the spider can eat as much as it wants, and overeating can lead to rupture of the abdomen. In nature, a heavy spider will not be able to keep up with its prey, thereby providing itself with a normal diet. A spider may not eat for a very long time (according to research results, a spider may not eat for 1 year and 9 months), the most important thing is access to water! However, the lack of food will be detrimental to him, so feed him in a balanced way! Remember, the more a spider eats, the faster it grows, but it also ages faster!

Males mature at 3-4 years of age, and females at the age of 5-7 years. Outside the mating season, the ladies are aggressive towards the gentlemen and simply kill them, taking advantage of superiority in mass and size. Males are afraid to even of females ready to fertilize, so they try to impregnate them with a swift attack when they are distracted or busy with feeding. After mating, they quickly run away. Fertilized females feed intensively and, after 1-2 months, lay their eggs in a cocoon that resembles a hammock in appearance. Spiders are born in 5-8 weeks. After the first molt, they break the cocoon and scatter in different directions.

The diseases affecting Baboon Spiders are currently under-studied, so there is no established practice of their treatment. The most common cause of death for a captive spider is severe dehydration, so the substrate must be constantly and reasonably well hydrated. Although this species of spider does not need ample hydration, it should be done once a week. 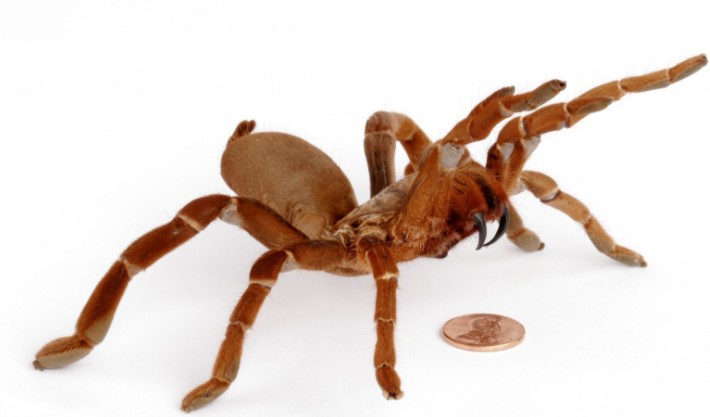 The spider can also die from injury or severe bruising. To prevent indoor exotic from falling from a great height, it is very important to use a cover with small but numerous ventilation holes to cover the terrarium. To treat the wound received by the arthropod, ordinary petroleum jelly is used.

Several species of ticks can parasitize on spiders, but the greatest danger to exotics is posed by predatory ectoparasites, which infect the lungs of an arthropod and cause fairly rapid death of such a pet. For preventive purposes, a complete replacement of the substrate in the terrarium should be carried out every six months. Internal parasites represented by nematodes cause no less harm to the spider, therefore it is very important to keep the tarantula’s dwelling clean.