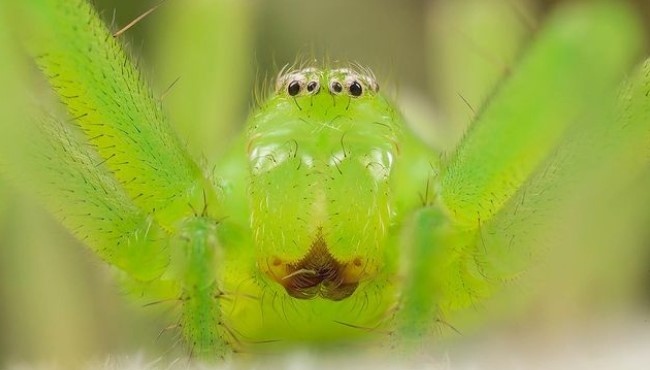 The brightest representative of the arachnids – Green Huntsman Spider, got its name from its bright protective green color. This color is promoted by the special substance, which is found in tissue fluids and hemolymph of arachnids. It is a member of the Sparassidae family that is harmless to humans.

The class of arachnids originated about 400 million years ago. Of all the organisms that live on our planet, arachnids are the most ancient. Spiders easily adapt to changing environmental conditions and change easily. They multiply quickly and live for quite a long time. The main distinguishing feature of arachnids is the web that they can weave. Some spiders use the web as a trap, others use it to move, save food. And also many spiders lay eggs on the cobweb to preserve their offspring. 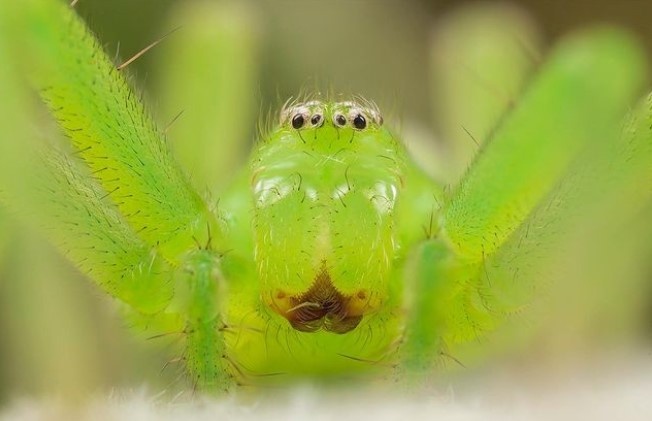 Micrommata Virescens belongs to the genus Micrommata of the Sparassidae family, this family includes 1090 arachnid species, which are combined into 83 genera. This species is called Huntsman Spider, which means “Hunter”. All representatives of this family are swift and dexterous predators. They hunt their victims without the help of a web, attacking and biting the victim. Micrommata belongs to the Crab Spider group. These spiders got this name due to the special structure of the limbs, and a strange gait more like the movement of a crab. The spider moves as if sideways.

For the first time, this species was described by a naturalist from Sweden Karl Clerk back in 1957. He gave this species the name Micrommata Virescens. Also, a detailed article was published about this species in the Kosmos-Atlas Spinnentiere Europas by the famous zoologist and writer Heiko Bellman.

Green Huntsman Spiders are small spiders about 10 mm in size, the female of these spiders is slightly larger than their size is about 12-15 mm in length. These spiders have an intense bright green color, which helps them to hide well during the hunt and be completely invisible. The spider’s body consists of a cephalothorax and 8 powerful limbs. The spider has 8 eyes on its head, which provides a fairly wide view. On the abdomen of males, a red stripe is noted, several yellow stripes adjoin it. On the sides of the males, you can also see several stripes of bright red color. 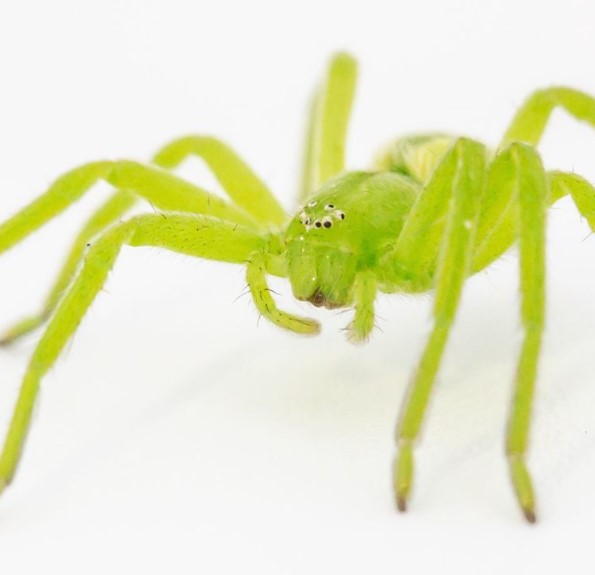 Young spiders also have an intense green color, but closer to the onset of cold weather, the color of the spider’s changes to yellow-brown, with reddish dots. The limbs of this type of spider are of different sizes. The spider has two pairs of forelimbs, which are much longer than the hind ones. Because of this, spiders have a very peculiar gait.

Although spiders look very neat and graceful on the outside, they are very fast. Spiders jump high, can move incredibly fast on the grass. Even having stumbled, a spider can hang on its web, and then jump to the nearest leaf.

The habitat of Green Huntsman is quite extensive. It occurs naturally in Northern and Central Europe, including Denmark and southern Great Britain.

These green spiders live in thickets of grass. They can be found in sunny meadows and forest edges. On the slopes of the mountains in the fields, in bushes and vineyards. Also, Green Huntsman Spider can be found in any park on the lawn and in thickets of bushes. These spiders, unlike many of their relatives, love bright, sunlight may well exist in well-sunlit meadows.

These arthropods are thermophilic. For people, Micrommata Virescens is absolutely safe, so you should not be afraid of seeing such a spider proudly sitting on a plant. For life and hunting, the spider chooses narrow green leaves, ears on which they live. The spider moves quickly and easily to change its place of residence. If the spider is very frightened, he can quickly move to another place, and find shelter there. Spiders are good at camouflaging in the grass, making them difficult to see In fact, a huge number of them live on any lawn.

The main diet of a spider is various insects:

Interesting fact: Green Huntsman Spider can hunt insects several times larger than itself, and this does not scare the spider at all.

The spider has a very interesting hunting process. To be unnoticed, the spider finds a thin green leaf. The spider sits on it with its head hanging down. He puts his front legs in front of him, and with his hind legs, he rests tightly on the surface. Before the hunt, the spider fixes its thread from the web to the plant in advance, and when an insect appears in the spider’s field of view, the spider pushes off with force with all its legs and gently rolls down the leaf. Having crushed the unfortunate insect under itself, the spider bites it hard a couple of times and drags it off to a convenient place. To feast on the unfortunate insect later.

Interesting fact: If during the hunt, the spider’s prey tries to escape, the spider jumps off the leaf, hanging with the victim on a safety thread. In this case, the victim of the spider can no longer resist, and she can only die.

The strong point of the spider is that, when it sees prey, it can, unnoticed, land right on it. In this case, the insect does not have time to react quickly, the spider bites it and takes it to a secluded place where it can feast on its prey.

Micrommata Virescens go hunting in the daytime and the evening. They patiently wait for their prey in the bushes and merge with them on the grass due to their color. Spiders of this species can most often be found at the end of May and June. The breeding season comes in August. The life of the Micrommata goes on calmly, after the hunt when they are full, they calmly bask in the sun. Spiders are very dynamic in nature. They move very fast. This type of spider is undemanding to food, and due to its unusual color and undemanding conditions of keeping, they are often grown at home. Green Huntsman Spiders live alone. 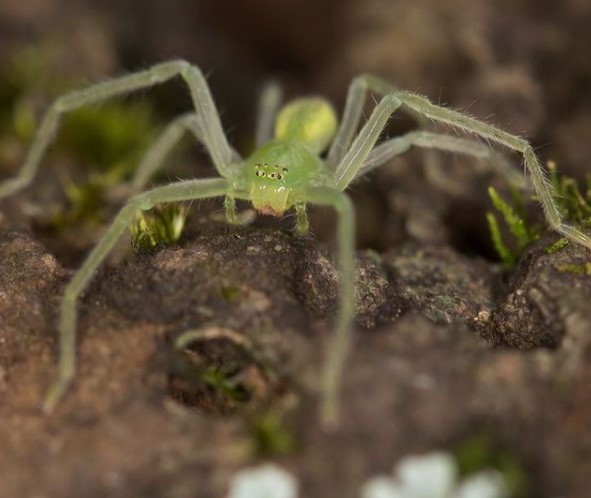 Spiders of this species weave a cocoon web only during the breeding season, to lay eggs there. One female takes care of the offspring. Family ties and social structures are not traced. The spider meets the female-only during the mating period, after the completion of the fertilization process, the spider is removed forever. hatched spiders quickly find food in the form of other spiders.

As mentioned earlier, Green Huntsman is a solitary lifestyle. Male and female meet once exclusively for mating. In this case, the male attacks the female and painfully bites her with chelicera. Up to the point that drops of blood appear on the female’s belly. The female always tries to run away, but the male watches over and hunts her. The male strongly digs into the abdomen of the female and waits until she calms down, then mates with her.

The mating process is as follows: the male climbs onto the female, bends down, and introduces his cibilium into the female. Mating takes several hours. Although the introduction of cibilium is performed only once. Sometime after mating, the female spider begins to weave a cocoon in which she will lay eggs.

The cocoon, which turns out to be quite large, usually hangs in the air on the ground. The female jealously guards the cocoon with eggs until little spiders emerge from it. After that, the female leaves her offspring. Her brood no longer needs her help. Spiders do not form special family ties. Young spiders get their own food by attacking other spiders.

This species of arthropods have a lot of natural enemies, but because they can camouflage themselves very well, their numbers are not in danger. The main enemies are:

The spider’s main enemy is Gryllotalpa unispina. She attacks weakened spiders and eats them. She is much larger than this type of spider and loves to feast on them. Centipedes, geckos, and hedgehogs are also considered natural enemies of this species. Inexperienced and young spiders are most often killed. Often they simply cannot cope with their prey during the hunt and die themselves. Or they cannot distinguish a predator and approach it imprudently close, although having learned about the danger, spiders can disappear very quickly. 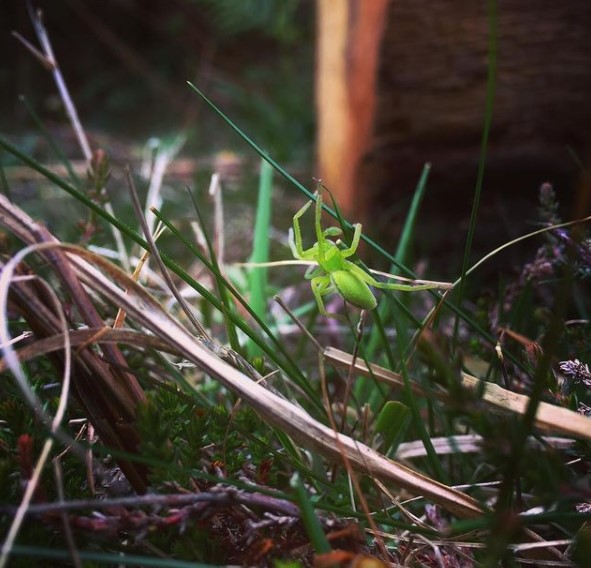 Wasps and bees of various species are considered no less dangerous enemies of spiders. Wasps do not eat a spider, they use its body to preserve their offspring. Wasps paralyze spiders, carry them to their lair and lay eggs in the spider’s belly. The hatched wasp larvae eat the spider from the inside.

As stated earlier, Micrommata Virescens are cannibals. They can attack their relatives and kill them. The main threat comes mainly from large spiders. During mating, females often die from injuries. The spider has no reason to kill her, however, the female can die from the harsh treatment of her.

Even though we rarely see spiders of this species, in principle, nothing threatens their population. The Green Huntsman can camouflage well and is therefore not visible in green terrain. This species successfully inhabits fields and forests. It spreads quickly and is capable of relocation, although it loves more warm and bright places. When breeding, the female lays a large number of eggs in one litter, and many new spiders hatch from them. 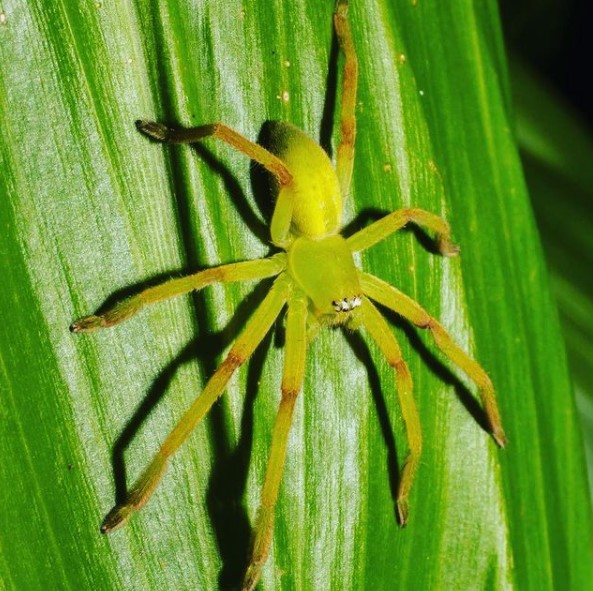 Of course, human activities have a bad effect on the population of this species of arthropods. And indeed of all types of living beings on our planet.
Man is cutting down forests, fields and parks are getting smaller. The living creatures inhabiting green spaces die in large numbers, but this species is not threatened with extinction. This type of spider is too tenacious. Perhaps soon Micrommata Virescens will be able to adapt to different environmental conditions and expand their habitat.

The Green Huntsman species is not on the verge of extinction and does not need special protection. But to preserve not only the population of this species but nature as a whole, you need to take care not to cut down forests and preserve as many different green spaces as possible, clean natural corners untouched by civilization.

The spider of the species Micrommata Virescens is safe for humans and does not attack humans. The Green Huntsman can only bite on the defensive, and the bite does not pose any particular danger to humans. You shouldn’t be afraid of these little neon green spiders, they are not dangerous. Spiders can be grown in home terrariums, they are unpretentious. It is very interesting to watch the life of this species of spiders. However, these insects are very fast and agile, and leaving even a small crack in the lid, the spider will certainly get out of the terrarium, and it will be difficult to find it.