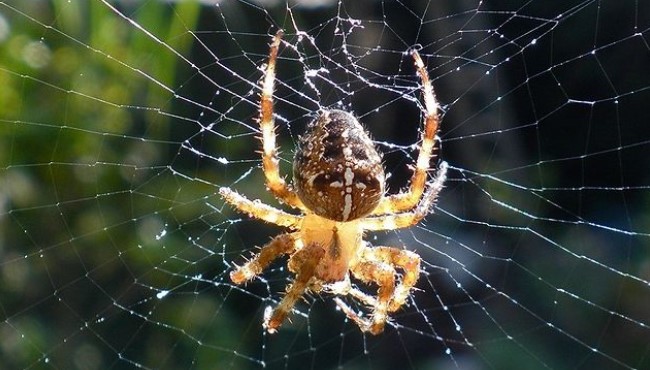 The Cross Spider is a huge group of arachnids, which numbers about six hundred species. Representatives of this species are ubiquitous, found in almost every country. Their favorite habitat is placed with high moisture content. Very often they penetrate a person’s dwelling.

These spiders are called Cross because of the peculiar coloring in the back area. It is in this part of the body that spiders have a peculiar pattern in the form of a cross, which is characteristic only for this type of arthropod. With the help of this feature, they scare away birds and other representatives of flora and fauna, which do not mind eating spiders.

Cross Spides are representatives of the order of spiders, the suborder of Araneomorphaespiders, the family Araneidae, and the genus of crosses.

Today, scientists can only roughly indicate the period of the appearance of ancient arthropods. The chitinous shell of these representatives of flora and fauna disintegrates rather quickly, leaving almost no traces. A few remains of ancient arthropods have been found in pieces of hardened resin or amber. Today, zoologists call the approximate period of the appearance of arachnids – 200-230 million years ago. The first spiders had very small body sizes, which did not exceed half a centimeter.

Their body structure was also significantly different from the modern one. Spiders of that time had a tail, which was intended to make strong spider webs. The so-called spider webs were used to line their burrows, or shelters, as well as to protect the clutch of eggs from damage and extinction. In the process of evolution, the tail of the ancient arthropods fell away. However, the modern spinning body, which is now, did not appear immediately.

The first spiders appeared presumably on Gondwana. Then they spread very rapidly over almost the entire land area. Subsequent ice ages significantly narrowed the regions of their residence. Arthropods are characterized by fairly rapid evolution, during which spiders have changed outwardly depending on the region of their habitat, as well as one belonging to a particular species.

Like other arachnids, the Cross Spider’s body is divided into two segments: the cephalothorax and abdomen. Also, they have arachnoid warts and the walking apparatus is represented by the hip, knee segment, lower leg, forefoot, paws, and claw. Spiders also have chelicerae and pedipalps.

Cross Spiders have a fairly small body size. In representatives of this species, males are significantly inferior to females in body size. The average body length of a female is 2.0-4.5 cm, and that of a male is 1.0-1.2 cm. The body of an arthropod is covered with a sand-colored chitinous membrane, which insects typically shed during molting. Spiders have 12 limbs: 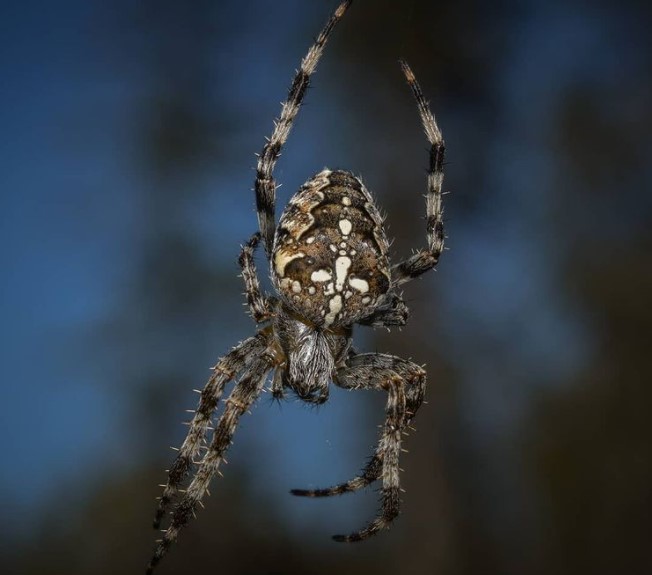 Cross Spiders have as many as four pairs of eyes, but they are poorly developed. Vision in these representatives of arthropods is poorly developed, they can only distinguish silhouettes and general outlines. The sense of touch serves as a reference point in the surrounding space. This function is performed by the hairs that cover almost the entire body.

Interesting fact: On the body of spiders there are a huge variety of hairs of various types. Each type is responsible for receiving certain types of information: light, sound, movement, etc.

The abdomen of the spider is round. There are no segments on it. On the upper surface, there is a clearly pronounced cross-pattern. In its lower part, there are three pairs of special spider warts. It is in these warts that thousands of glands open, which produce strong, reliable spider webs. The respiratory system is located in the abdomen and is represented by two pulmonary sacs and a tracheal tube. The heart is in the back. It has the shape of a tube and vessels branching off from it.

Spiders of this species are characterized by ubiquitous distribution. They live in almost every country in Eurasia. Also quite common in North America. The Cross Spiders prefer places with high humidity, little sunshine, and high temperatures. Spiders love to settle on forest edges, meadows, gardens, and fields. The human dwelling is no exception. Once in living quarters, spiders climb into cracks or joints between walls, hard-to-reach places, gaps between furniture and a wall, etc. Often Cross Spiders can be found on various types of vegetation located near a reservoir. Geographic regions of habitation: 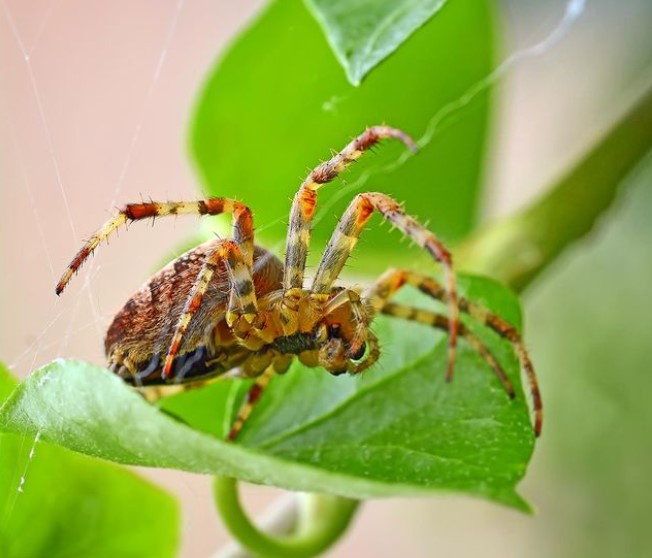 Spiders prefer to settle where it is easy and convenient to weave their trapping nets, into which a sufficient number of insects are likely to fall.

Cross Spider is far from a harmless representative of arthropods. It belongs to the poisonous species of arachnids, and by its nature is considered a hunter. He goes hunting most often at night. What is the food source:

Getting out to hunt, the spider is located in the central part of the web and freezes. If you observe him during this period of time, it seems that he is dead. However, if the prey gets caught in the net, the spider plunges its front pair of limbs into it with lightning speed, injecting poison at the same time. After a short period of time, the potential food stops resistance. The Cross Spider can eat it right away, or leave it for later.

These representatives of arachnids are considered voracious. To get enough, they need an amount of food per day that exceeds their own body weight. For this reason, spiders spend most of the day hunting. Even during the rest period, the signal thread is always tied to one of the limbs of the spider.

Interesting fact: The spider does not eat everyone who falls into its trapping nets. If a poisonous insect has fallen into them, or one that exudes an unpleasant odor, or a huge insect, the spider simply bites the fixing threads and releases it.

Arthropods have an external type of digestive tract. They cannot digest food on their own. They tend to partially digest it with the help of injected poison. Only after the entrails of the caught insect have turned into a liquid substance under the influence of the toxin, do the spiders drink it. Also, spiders often, after paralyzing the victim, wrap it in a cocoon of their web. It also has a partial digestion process.

These spiders are nocturnal arthropods that tend to be most active at night. They spend most of their time hunting and have little rest. They definitely choose places where there is a lot of moisture and little sunshine as their habitat.

Cobwebs are often woven between the branches of shrubs, trees, various types of vegetation, blades of grass, etc. Themselves are located in a secluded place near their trapping net. The spider threads that can weave the spiders are very strong and can hold even fairly large insects, whose dimensions are several times larger than the body of the spider itself. The Cross Spiders are considered hard workers, as they tirelessly weave their webs. They tend to weave huge webs. After they become unsuitable for catching prey, they scatter it and weave new nets. 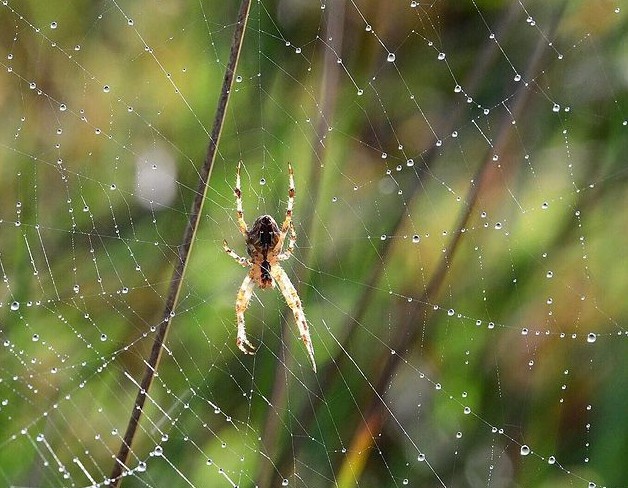 Interesting fact: The spider will never get entangled in its own trapping nets, as it always moves strictly along a certain trajectory of non-sticky areas.

Spiders also weave a web mainly at night. This is because the main enemies of the Cross Spiders are diurnal and hunt them in the daytime. Spiders in the process of forming a trapping net show accuracy, detail, and scrupulousness. In the course of their life, they rely not on sight, but on touch. The Cross Spider leads an exclusively solitary lifestyle.

Throughout the spring and summer, male spiders are busy forming cobwebs and providing enough food. During the onset of the mating season, males leave their shelters and begin to actively search for a female for mating. During this period, they practically do not eat anything, which explains such a significant difference between males and females.

Cross Spiders are dioecious arthropods. The period of mating relations and courtship of females is more often at night. It consists of the performance of peculiar dances by males, which consist of tapping with their limbs. After the male manages to reach with his limbs to the head of the female, the transfer of seminal fluid occurs. After mating, most males die from the female’s poisonous secretion. 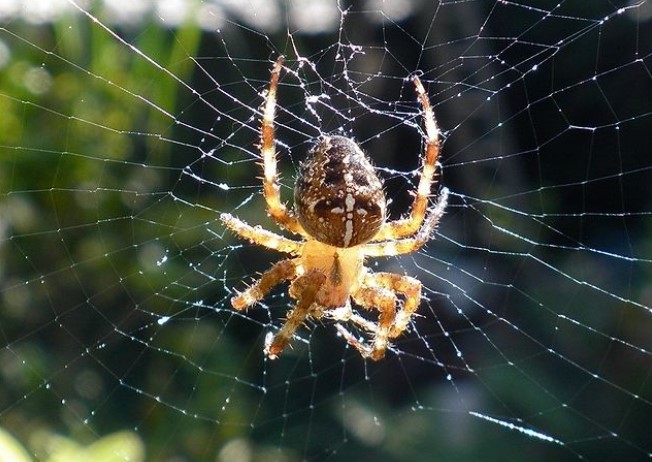 The period of marriage falls at the end of the summer season, the beginning of autumn. The female makes a cocoon from the web, into which she places the eggs. One cocoon can contain from 3 to 7 hundred honey-colored eggs. At first, the female wears this cocoon on herself, then finds a secluded place and hides it. Cocoon reliably hides future offspring from rain, wind, and cold. In the spring, spiders begin to appear from the eggs. For a short period of time they are inside the cocoon, then come out of it and spread out in different directions. Small Crosses immediately become independent and lead an isolated lifestyle. After the spiders leave the cocoon, they try to separate as quickly as possible. Because of the high competition and the possibility of becoming food for older individuals, such a step will significantly increase the chance of survival.

Interesting fact: Since newly born young individuals have rather small and weak limbs, to separate from each other, they use a web, on which they can fly up to several hundred kilometers, subject to the presence of wind.

Spiders adapt well to new conditions. It is because of this that they are often turned on by lovers of exotic representatives of flora and fauna as pets. For their maintenance, a sufficient amount of terrarium is used to provide space for a fairly large cobweb.

Natural Enemies of the Cross Spider

Even though Cross Spider is ranked among the dangerous, poisonous spiders, he also has enemies. It is to reduce the likelihood of being eaten that they are most active at night. The main enemies of this type of arthropods can be called birds, as well as insects – parasites. Some species of wasps and flies wait for the spider to freeze on its web in anticipation of the next victim, fly up to it and instantly lay eggs on its body. Subsequently, parasite larvae appear from them, which, in fact, feed on the insides of the spider. When the number of parasites increases, they practically eat the spider alive. Cross Spiders are small in size, which often leads to the fact that they themselves become the prey of other, larger arachnids. The enemies of the Cross Spider also include some amphibians, such as lizards or toads. The main enemies of Cross Spider in vivo:

Man is not the enemy of the spider. Rather, spiders in some cases can damage human health. It is unusual for them to attack first. When meeting with a person, these representatives of arthropods are in a hurry to hide. However, if they sense danger, they attack. As a result of a bite, an adult healthy person will not die, however, he will definitely feel discomfort and a change in general well-being. The consequence of a Cross Spider bite is pain, dizziness, nausea, vomiting, swelling, suppuration of the bite site. Most often, all of the above symptoms disappear without medication.

In many countries around the world, people give birth to these spiders as exotic animals in a terrarium. Cross Spider is an integral part of the ecosystem. Many people mistakenly believe that if an insect or arthropod is poisonous, it must certainly be destroyed. It’s a delusion. A person must understand that if such an important link as spiders disappear, irreparable damage will be caused to the earth’s biosphere.